Along Ironman route, signs hacked to insult 'idiots on bikes'

Gene Caffrey was finishing up a bike ride Sunday along Old U.S. Highway 1 when he saw a sign that stunned him.

"I had to stop my ride because it kind of, it threw me off, because it didn't look real. I thought I was seeing things," he said.

The message used a vulgar word to describe the bikers who will be racing along that route next Sunday as part of Raleigh's Ironman 70.3 triathlon.

"I just took a quick 15-second video of it," Caffrey said. 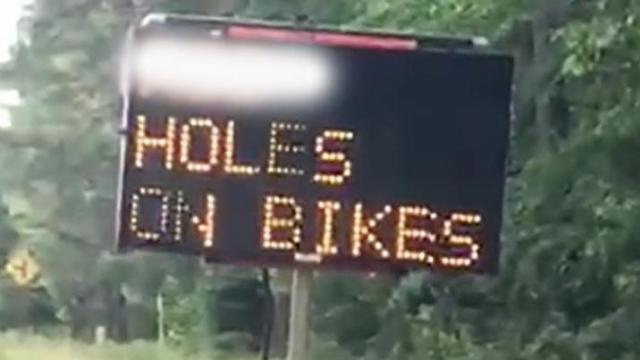 Who posted the message and why is still a mystery, but the sentiment worries Caffrey, a former Ironman participant and avid biker, who says the message, while perhaps amusing, might embolden some drivers.

"What if someone that didn't really like us, there's some people in cars that don't like cyclists, and they saw that sign? It could cause issues out there with us," he said.

Along another stretch of the Ironman 70.3 course, on U.S. Highway 64, another sign was hacked. This one said "Right lane closed due to idiots on bikes."

"With a race like Ironman coming through, I can see why residents get frustrated with it. It's a Sunday and it's, of course, a thousand people riding through there, but still, it's a bad message," Caffrey said.

A spokesman for the North Carolina Department of Transportation told WRAL News the signs had been rented by race organizers.