All Children's Playground remains open; fundraiser for its replacement planned at Whole Foods 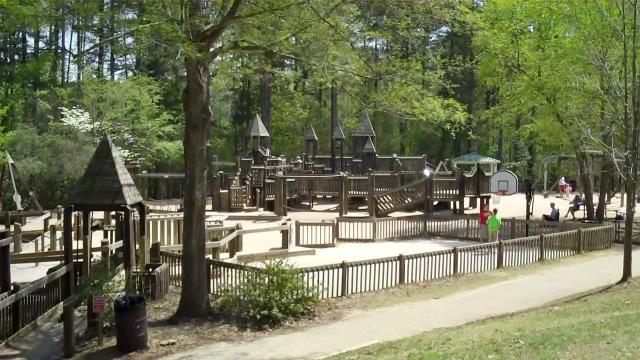 The new north Raleigh Whole Foods will donate 5 percent of its total sales to the Sassafras All Children's Playground project next Tuesday.

Sassafras' planners hope to eventually raise enough money to replace the aging All Children's Playground at Laurel Hills Park with the ambitious project, which is expected to cost about $2 million. The goal is to build a large playground where children with handicaps can play side by side with others.

Fund raising for the project has been slower than originally expected. Right now, organizers are focusing on community fund raising projects. I'm told there will be several events in the next month intended to do just that.

Among them is a charity sale at Garage Brothers, a company that sells items cleaned out from garages and attics to thrift stores. Each month, the company chooses a local charity to support. From 9 a.m. to 6 p.m. July 9, Garage Brothers will hold a benefit for Sassafras and donate 25 percent of all sales to the project. Garage Brothers' thrift store is at 303 E. Durham Rd in Cary and its warehouse is at 3720 Overlook Rd. in Raleigh. Both locations are open to the public.

The north Raleigh Whole Foods is located at 8710 Six Forks Rd. It's open daily from 7 a.m. to 10 p.m. Click here for more information about Tuesday's fundraiser.

And because I've gotten this question on Facebook and by email several times in the past month or so, I just want to clarify that the All Children's Playground at Laurel Hills is currently open. The playground will remain open until there is enough money to replace it. And even then, Kellee Beach, marketing administrator for the Raleigh parks department, tells me there will be plenty of public notice before it is closed.

Plans call for construction of the new playground to take place during "non-peak" times to minimize any disruption, she tells me.

For more on Sassafras, check earlier posts in the box.