Alexey Navalny remains in jail as court rejects his appeal. Then he's fined $11,500 in defamation case 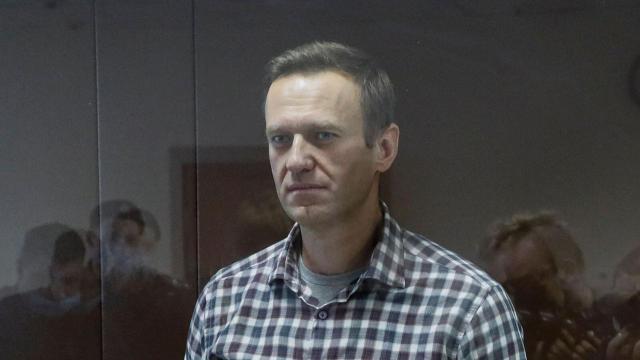 CNN — Kremlin critic Alexey Navalny will remain behind bars after a Russian court partially rejected his appeal over a two-and-a-half year jail sentence handed down earlier this month.

Then, in a separate case also heard on Saturday, Navalny was found guilty of defaming a World War II veteran and fined 850,000 rubles ($11,480).

In the morning proceedings at Moscow City Court, the judge did shorten the activist's sentence by a month and a half, after taking into account time he spent under house arrest from December 2014 to February 2015.

Navalny's lawyer Olga Mikhailova petitioned the court to release her client immediately, as demanded by the European Court of Human Rights (ECHR).

The court handed down the original sentence on February 2, after ruling that while Navalny was in Germany, he violated probation terms from a 2014 case in which he had received a suspended sentence of three and a half years.

The suspended sentence was then replaced with a prison term.

Navalny was initially detained by the Russian state in January following his arrival from Germany, where he spent five months recovering from Novichok poisoning he blamed on the Russian government. The Kremlin has repeatedly denied any involvement.

Mikhailova argued that Navalny's life and health were in danger while in detention.

At a separate hearing at Babushkinsky District Court later on Saturday, Navalny was convicted of defaming a World War II veteran, a charge he dismissed as politically motivated.

The case related to comments Navalny made last June on social media. He criticized a video broadcast by state TV channel RT, in which various prominent figures expressed support for controversial changes to the Russian constitution. Veteran Ignat Artemenko, 94, was among those supporters. Navalny was accused of defaming the veteran.

The constitutional changes, which were backed in a July 1 referendum, paved the way for Russian President Vladimir Putin to stay in office until 2036, despite having already ruled the country for two decades.

"Navalny knew for sure that the information he had disseminated was false and defamed reputation," the judge, Vera Akimova, said Saturday.

In December 2020, the penalty for defamation was changed to include potential jail time. But at the time of Navalny's alleged offense, those found guilty could only be fined up to a million rubles (about $13,300) or ordered to carry out community service.

Navalny's treatment has prompted mass protests across Russia and condemnation from Western leaders.