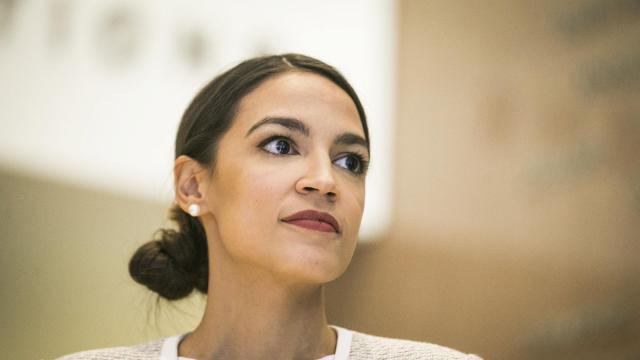 NEW YORK — Alexandria Ocasio-Cortez, the self-described Puerto Rican “girl from the Bronx” who is set to become the youngest congresswoman in U.S. history next month, added another layer to a complex personal story: She has Jewish heritage.

Ocasio-Cortez, D-N.Y., made the reveal Sunday evening at a synagogue in the Jackson Heights neighborhood of Queens, telling the crowd that “a very, very long time ago, generations and generations ago, my family consisted of Sephardic Jews.”

She dated her ancestry to those who had to flee Europe during the Spanish Inquisition more than 500 years ago and sought refuge in the New World.

“Some of those people landed in Puerto Rico,” she explained.

“As is the story of Puerto Rico, we are a people that are an amalgamation,” she said. “We are no one thing. We are black; we are indigenous; we are Spanish; we are European.”

The announcement seemed to delight the Queens synagogue celebrating Hanukkah, according to video of the event. Amid laughter, Ocasio-Cortez replied to someone in the crowd. “He’s like: ‘I told you! I knew it! I sensed it!”

The story quickly spread from news outlets in America to Israel.

Ocasio-Cortez, 29, who danced and helped light the menorah Sunday, has in her own life identified as Catholic. She wrote a piece in America, a Jesuit publication, over the summer titled, “Alexandria Ocasio-Cortez on Her Catholic Faith and the Urgency of Criminal Justice Reform.”

On Monday, as the video went viral, Ocasio-Cortez tried to get ahead of any criticism of her ancestral claims. Sen. Elizabeth Warren, D-Mass., has faced scrutiny for her claims of Native American heritage, only to endure more criticism after she released results of a DNA test.

“Before everyone jumps on me — yes, culture isn’t DNA,” Ocasio-Cortez wrote on Twitter, the social network that has helped vault her career and where she counts more than 1.5 million followers, more than all but a few members of Congress.

“But to be Puerto Rican is to be the descendant of: African Moors + slaves, Taino Indians, Spanish colonizers, Jewish refugees, and likely others. We are all of these things and something else all at once — we are Boricua.”

She provoked some outrage earlier this year when she referred to Israel’s “occupation of Palestine,” in an interview with PBS, citing Israeli settlements. As she was asked to expand on her thoughts, she added she was “not the expert on geopolitics on this issue.”

Ocasio-Cortez, even before taking office, has become a favorite target of conservatives and conservative media. Last week, she got into an online spat with Donald Trump Jr., the president’s son, who posted a meme about her and socialism on Instagram.

“I have noticed that Junior here has a habit of posting nonsense about me whenever the Mueller investigation heats up. Please, keep it coming Jr — it’s definitely a ‘very, very large brain’ idea to troll a member of a body that will have subpoena power in a month,” Ocasio-Cortez replied on Twitter.

To which Trump’s girlfriend, former Fox News personality Kimberly Guilfoyle, retorted on Twitter: “Did you just threaten to subpoena someone for criticizing you? As a lawyer and former prosecutor, I find this deeply troubling.”

Ocasio-Cortez will be sworn into Congress in January.