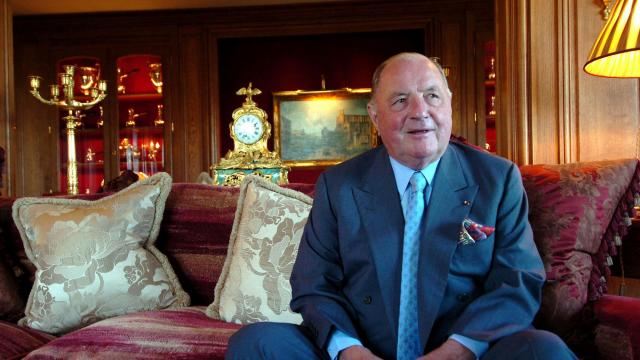 Albert Frère, a Belgian high school dropout who parlayed the profits from his father’s nail factory into a fortune worth billions, and whose multinational mergers and acquisitions helped solidify the economic integration of Europe, died Monday in Gerpinnes, Belgium. He was 92.

His death was announced by Groupe Bruxelles Lambert, the holding company that he and Paul Desmarais, a Canadian entrepreneur, bought in 1982 to manage their investments.

Frère, who was named a baron by King Albert II of Belgium in 1994, knew no borders as he bought and sold major stakes in blue-chip conglomerates. Those conglomerates also ignored national boundaries in Europe as they merged with or acquired other companies.

After buying a stake in the Belgian oil company Petrofina, for example, Frère later sold it to a French competitor, Total.

“I am a Belgian first of all, but I am also a European,” he told The Financial Times in 1999. “If we want to build Europe, these kinds of national barriers have to come down.”

Often described as the Warren Buffett of Belgium, Frère operated without fanfare from a luxurious apartment in Paris and from Charleroi, a city in southern Belgium near the town of his birth. He became, according to Forbes, the wealthiest man in his own country and was among the richest in Europe, with a net worth estimated at close to $6 billion.

“Listen, it’s so enriching and really amusing to succeed at a deal,” he said in an interview with The New York Times in 2006. “It’s like when little children receive gifts. For me, it’s the same thing. It’s why I often say to work hard, but do it with pleasure.”

Frère was born on Feb. 4, 1926, in Fontaine-l'Évêque, in Belgium’s coal and steel region. His father, Oscar, a nail and chain merchant, died when Albert was 17. The business was largely idle during World War II, but Albert dropped out of school in the mid-1940s to help run the plant with his mother, Madeleine.

“A diploma is important at the beginning,” he told The Times, “but for the rest of a professional career, the tools of success are constant work, business instincts, pragmatism and charisma.”

He remembered his mother teaching him to be thrifty, advising him: “Extinguish the lamps. We don’t have the resources of the Rothschilds!”

Post-World War II reconstruction made the family nail company profitable, and Frère, recognizing that the Korean conflict would create a demand for steel, invested in a plant and eventually controlled half the country’s production. He made a windfall in 1979 when the Belgian government nationalized the industry before prices slumped.

After he established Pargesa Holding in Geneva with Desmarais (who died in 2013), the partners took over Groupe Bruxelles Lambert in 1982. Frère engineered the 2007 merger of Suez SA, a waste and water company, with Gaz de France, and sold his 25 percent stake in the German media company Bertelsmann for $5.8 billion in 2006.

Frère retired as chief executive of Groupe Bruxelles Lambert in 2015.