Alan Greenspan: Investors should prepare for the worst 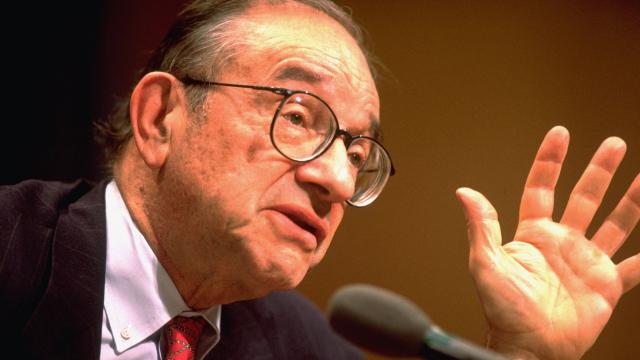 (CNN) — Alan Greenspan says the party's over on Wall Street.

The former Federal Reserve chairman who famously warned more than two decades ago about "irrational exuberance" in the stock market doesn't see equity prices going any higher than they are now.

"It would be very surprising to see it sort of stabilize here, and then take off," Greenspan said in an interview with CNN anchor Julia Chatterley.

He added that markets could still go up further — but warned investors that the correction would be painful: "At the end of that run, run for cover."

Markets have staggered in recent weeks, with spooked investors selling over mixed messages coming from the White House concerning the status of trade negotiations with China and growing fears of a global economic slowdown.

The jitters come as the Federal Reserve's interest-rate setting committee prepares to meet Tuesday and Wednesday. They're expected to raise rates for the fourth time this year — though investors will also be combing for clues on their plans for 2019. Minutes from the Fed's last meeting in November signaled policymakers want to take a more flexible approach next year adding to investor anxiety.

On Monday, the S&P 500 closed the trading day at its lowest level since October 2017, while the Dow Jones Industrial Average plummeted more than 600 points at one point in the day.

"The volatility is a function of how we speak, think and feel — and it's variable," he said. "Unless you can somehow radically change human nature and how we respond, this is what you'll always get and have been getting. You have to count on it, if you're going to understand how the market functions."

President Donald Trump has in recent weeks taken repeated aim at current Fed chairman Jerome Powell, a former investment banker appointed last year by Trump himself. The President, a close market-watcher who has staked his presidency on the state of the economy, has accused Powell of trying to undercut him politically by slowing the economy down.

He blamed the Fed for the market rout in October, calling the Fed "out of control" and suggesting Powell seemed to enjoy raising rates. He also later called the Fed a "much bigger problem than China," referring to a trade war between the two countries.

One White House official said that Trump continues to privately express anxiety about the markets, even as he publicly insists the economy is strong.Before markets opened on Tuesday, Trump tweeted yet another fresh warning to Fed officials to slow down their rate hike plans, while encouraging policy makers to read a Wall Street Journal editorial "before they make another mistake."

"Don't let the market become any more illiquid than it already is," Trump tweeted. "Stop with the 50 B's. Feel the market, don't just go by meaningless numbers. Good luck!"

It was the second day in a row Trump tweeted on the Fed's upcoming meeting. On Monday, Trump tweeted it was "incredible" that the Fed was considering a rate hike despite low inflation and a strong dollar.

But Greenspan, who was first appointed to the Fed by President Ronald Reagan and became the longest-serving chairman, remaining in his role into the George W. Bush administration, said a key driving factor in the market's volatility has been the "pronounced rise in real long-term interest rates."

The former chairman also warned that the United States may be poised for a period of stagflation, "a toxic mix" when the economy suffers from high inflation and high unemployment. The last time the country experienced such an episode was in the 1970s and early 1980s.

"How long it lasts or how big it gets, it's too soon to tell," said Greenspan. "We'll know it when we get on top of it."

Other economists, however, have expressed concerns about the risk of raising rates now, even at the risk of creating the impression that the President had cowed his own policymakers — whose independence from political pressure is intended to reassure markets that their decisions are free of political concerns.

"I'm in the peculiar position of thinking the Fed should not raise rates, but it should not listen to the President, which is a hard position," Nobel Prize-winning economist Paul Krugman said Monday on CNN's Quest Means Business. "There's a pretty good case for not raising rates now. But to not raise rates in this beating would look like they're allowing themselves to be bullied."

Greenspan, however, dismissed the idea that the Fed might cave to political pressure by the President.

"I've seen no evidence of that," said Greenspan, who said during his tenure he figuratively wore "ear muffs myself." Adding he never recalled a time when someone had wished he had raised rates.

"We listen — sometimes respectfully, sometimes not," he said. "But do we change policy? 'No.'"