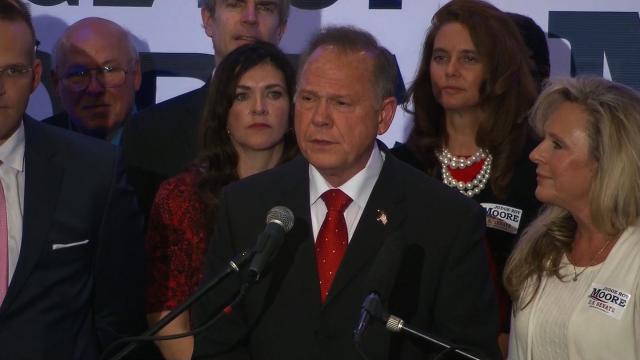 NEW YORK (CNNMoney) — The three biggest newspapers in Alabama have a message for their readers: "Stand for Decency, Reject Roy Moore."

The Alabama Media Group stripped the editorial across its Sunday front pages. The unusual step comes 10 days after misconduct allegations first surfaced against Moore, the Republican nominee for the state's Senate seat.

The editorial doubles as an endorsement of Moore's opponent, Democrat Doug Jones. It appears in The Birmingham News, Mobile Press-Register and The Huntsville Times and it is prominently featured on the papers' shared website AL.com.

"This is an important moment in Alabama and America, and we felt such treatment was in line with what is at stake in this race," Michelle Holmes, the VP of content for AL.com, told CNNMoney early Sunday.

The election is 23 days away.

The papers previously said that Moore was "grossly unfit" for office, but they stopped short of endorsing Jones.

Now the joint editorial board says that "there is only one candidate left in this race who has proven worthy of the task of representing Alabama. He is Doug Jones."

The editorial concludes: "The voters must make their voices heard."

There's a perennial debate in journalism circles about how much newspaper endorsements matter.

Moore is running an anti-media campaign, complete with lawsuit threats, so he may cite the front-page denouncements as another example of the "establishment" out to get him.

But the editors in this case aren't big shots from Washington. They are Alabamians who decided to weigh in.

"This election is a turning point for women in Alabama," the editorial says.

Headlines in other Alabama papers on Sunday also reflected the contentious campaign.

The lead story in the Dothan Eagle is headlined, "Moore critic: Alabama Senate race a battle for nation's soul."

In the Tuscaloosa News, the question no one can answer until election day: "How will controversy affect voter turnout?"