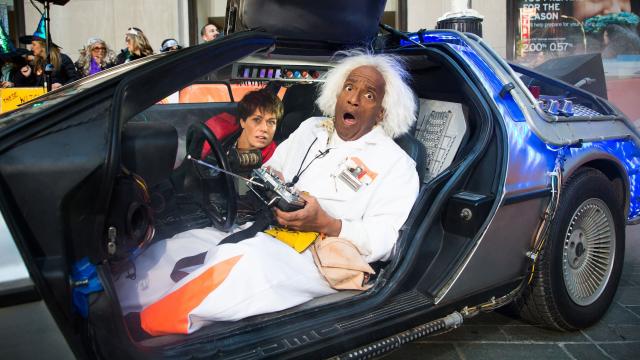 (CNN) — In the wake of the controversy at NBC over Megyn Kelly's black face comments, another one of the network's stars found himself in a racial brouhaha.

"Today" show meteorologist and co-host Al Roker took to social media after complaints about him dressing as a white character for Halloween.

NBC canceled Kelly's 9 a.m. show last week after she made what many viewed as offensive comments about black face Halloween costumes.

On Wednesday Roker and the rest of the "Today" team dressed in 1980s-inspired costumes on their show.

He appeared as "Back to the Future's" Doc Brown, a character played by white actor Christopher Lloyd in the 1985 film.

Roker, who had spoken out against Kelly's comments, was criticized on social media by some for having what they viewed as a double standard.

"@alroker: @megynkelly is a terrible person to even suggest that it is Ok for a white person to go as a black character for Halloween," one person tweeted. "Also @alroker: Goes as Doc brown, a white character from a movie for halloween.#Hypocrites #Whiteface."

But Roker did not appear in white face and defended his costume choice on Twitter.

"I'm going to say this one last time, but the folks who get it, understand and the ones who DON'T, won't," he tweeted. "I can be Doc Brown, and I wear the outfit and wig and not change my skin color if you're white, you can be President Obama if you want. Just don't color your skin!"