Raleigh, N.C. — Phase One of the plan to reopen the state is underway, but a group of protesters gathered in downtown Raleigh on Tuesday to protest Governor Cooper's gradual reopening plan.

ReOpen NC protesters said civil rights issue -- they feel the Governor is extending his power too far. They took their message straight to the front gate here at the Executive Mansion.

The governor, however, has said he is just following the data about the spread of COVID-19 and how to maintain safety.

Nurses and medical professionals have stood in counter protest in previous weeks. This week, a man who is immunocompromised paid $3500 to have an airplane bring his message of counter protest to the crowd of over 200 ReOpen NC protesters gathered below. 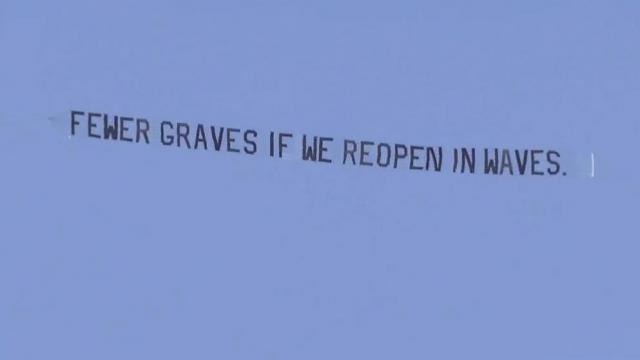 His message flew overhead on a banner, reading: 'Fewer graves if we reopen in waves.'

Many are ready to reopen business and churches, too.

Chris Young of Raleigh said, "You should be able to meet and fellowship together and try to help each other.”

Beverly Reddinger, who feels it’s possible to safely re-open her hair salon in Cary, said she is very concerned the restrictions will put her out of business, and unfairly so.

After eight weeks shut down, she totals her losses at about $50,000 dollars.

"I am not really sure what to do as a business owner. Do I continue to pay my overhead or do I go belly up and call it the end of the day?" she said.

The uncertainty combined with the financial pressure, is pushing many towards their tipping point. They are running out of patience for a slow, gradual reopening, concerned for the businesses that are facing immense financial struggle.

"What’s our landscape going to look like when this is all over?" asked Reddinger.

That's a question many people are wondering, not just protesters.

“We should have the freedom to decide what’s best for us," said Hill.

For a fifth straight week, protesters were met by opposing viewpoints.

In previous weeks, nurses and healthcare professionals have stood in silent counter protest--potentially risking their own health in order to make their statement clear: Reopening too quickly will lead to overwhelmed hospitals.

Todd Stiefel, who is immunocompromised and could not attend the protest in person, sent an airplane with a banner as a counter protest.

His banner, reading 'fewer graves if we open in waves,' flew over the protesters for hours.

"They don’t care about other people’s health. If they did, they would be wearing masks and social distancing," he said.

He believes their message is reckless and dangerous.

Stiefel wanted to amplify the voices of people like him - whose health prevents them from taking a stand in person.

"We do need to start opening the economy. We do need to do that, but we need to balance it by listening to the science, taking it slowly and not spreading this disease everywhere.” 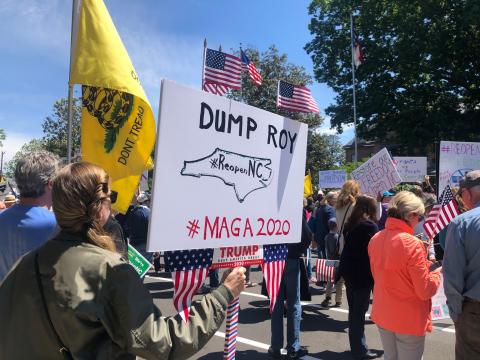 On May 8, North Carolina entered Phase One of a three-step plan to reopen the state. The plan keeps dining rooms, spas and salons and larger venues like churches and movie theaters closed until at least May 22, when they can reopen at 50% capacity. ReOpenNC organizers say they aren't happy with the phased reopening plan and they want Gov. Roy Cooper to immediately lift his statewide stay-at-home order.

The three phases and what they mean 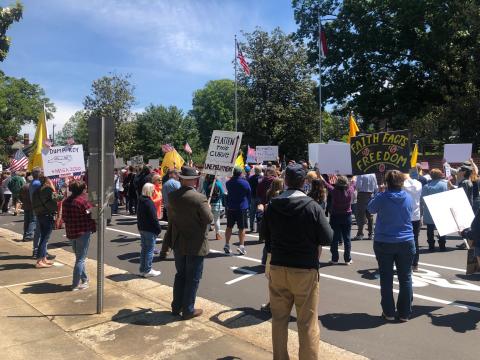 Over the past several week, others have shown up to send the same counter message, including some healthcare workers who stood in silence, wearing masks and gowns, to make a statement.

About 200 people turned out for the the previous ReOpenNC protest, held on May 5, but previous rallies led to arrests.

Meanwhile, Governor Cooper said we will remain in Phase 1 for at least two weeks. Phase 2 is at least 10 days away, and the governor has said data will drive his decisions in opening the state up any further. ​