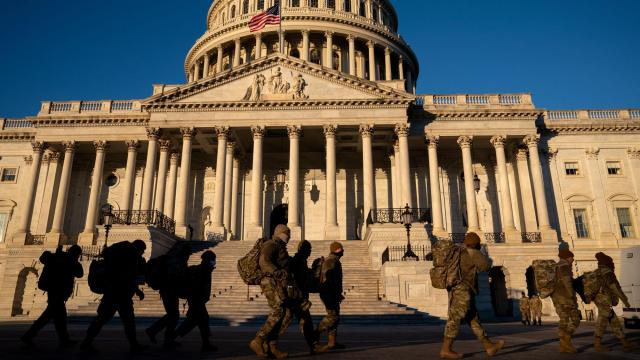 Airbnb, one of the biggest players in the short-term rental market, will cancel all reservations made in the Washington area next week and block new rentals, the company announced in a statement Wednesday.

The decision came after the police and elected officials warned Americans not to travel to Washington for the inauguration of President-elect Joe Biden, citing the risk of the spread of the coronavirus and the threat of another attack similar to last week’s violent siege at the Capitol.

Law enforcement authorities have warned of threats of violence ahead of the inauguration Jan. 20, and National Guard troops have flooded Washington in response. On Monday, the leaders of the District of Columbia, Virginia and Maryland issued a joint statement telling potential visitors not to travel to the area, citing both the coronavirus pandemic and the riot.

Already, 16 groups — some of them armed and most of them supporters of President Donald Trump — have registered to stage protests in Washington, although Mayor Muriel Bowser has asked federal officials to cancel any public gathering permits issued.

This week, Airbnb said it would review reservations in the Washington area and cancel those it determined were made by members associated with extremist or hate groups. On Wednesday, it said it would take the broader step of canceling all reservations in response to pleas for people not to attend.

Bowser and the governors of Virginia and Maryland “have been clear that visitors should not travel to the D.C. Metro area for the Inauguration,” the company said in a statement. “Additionally, we are aware of reports emerging yesterday afternoon regarding armed militias and known hate groups that are attempting to travel and disrupt the Inauguration.”

Airbnb said it would refund guests for their reservations and reimburse hosts at its own expense.

The company declined to say how many reservations would be canceled, the dates the cancellation policy would be in effect or how far from Washington its policy would apply.

But two Airbnb hosts who contacted the company about the status of existing reservations were told by customer service representatives that Airbnb was canceling reservations that started on or after Jan. 15 and ended by Jan. 21, according to screenshots provided to The New York Times.

Airbnb also said it had banned “numerous individuals” associated with known hate groups or otherwise involved with the mob at the Capitol. It declined to provide more details.