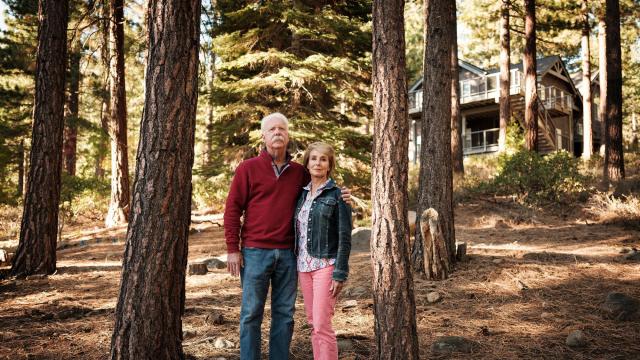 The luxury cabin in Incline Village, Nevada, just north of Lake Tahoe, has a hot tub, sauna, pool table, fire pit, two patios and a backyard full of towering pine trees. It sleeps 14, according to its listing on Airbnb. And it has been a nightmare for Sara Schmitz, a retiree who lives next door.

The home is frequently the site of raucous bachelor parties and weddings, Schmitz said. Recently, a crew of college students stayed there, blowing weed smoke into her house. When she asked them to stop, they threw trash in her yard.

“It’s a constant party house,” said Schmitz, 57. She has called the police a dozen times about the property and joined the Incline Village STR Advisory Group, an organization that fights short-term rentals — for which the largest source is Airbnb.

What Schmitz encountered is part of the “party house problem” facing Airbnb. That’s when guests who book its properties hold parties in them, something that appears to be happening more frequently in the coronavirus pandemic, as people look for places to socialize with bars closed and hotels appearing risky. In July, New Jersey police broke up a party at an Airbnb with more than 700 people in attendance.

The party houses pose a risk to Airbnb’s reputation and business as the $18 billion company prepares to go public this year. In many neighborhoods, people have been turned off by the rentals’ noise and annoyances. Complaints about party houses across sites like Airbnb and Vrbo soared 250% between July and September compared to last year, according to Host Compliance, which provides local neighborhood hotlines across the United States and Canada.

Worse, the party houses raise safety issues. Between March and October, at least 27 shootings were connected to Airbnb rentals in the United States and Canada, according to a tally of local news reports by Jessica Black, an activist fighting short-term rentals. The tally was verified by The New York Times.

Over the years, Airbnb employees have pushed executives to do more to address the party houses, said six people who worked on safety issues at the company. But they said the startup largely prioritized growth until a deadly shooting last Halloween at an Airbnb made national headlines. Five people died.

The issues are now fueling Airbnb’s many fights with communities over how to regulate home rentals. Groups like the one in Incline Village are becoming more vocal and are sharing their strategies for fighting short-term rentals. Cities including Chicago, San Diego, Atlanta and Ann Arbor, Michigan, have recently proposed or enacted stricter rules or bans on the properties.

“Airbnb’s long-run viability and profitability is going to have a big question mark” if the party issue is not resolved, said Karen Xie, a professor at the University of Denver who researches the short-term rental industry.

Christopher Nulty, an Airbnb spokesman, said the company is combating the party houses with “robust new policies, products and technologies to stop large gatherings, which far exceeds measures taken by others.” He said Airbnb has made changes even though the moves “knowingly impacted growth and nights booked.”

Airbnb began rolling out new rules against party houses around the same time that it was preparing to file to go public. In July, it said guests under the age of 25 with fewer than three positive reviews on the site could not book entire homes near where they live. In August, the month it filed for a public listing, it placed a 16-person cap on reservations, banned parties and sued guests who were responsible for the events.

Last month, it started testing technology to block suspicious last-minute bookings and suspended some party houses from its listings. And ahead of Halloween — the one-year anniversary of the shooting at the Airbnb in Orinda, California — it banned one-night rentals on Halloween. Some said the measures were too little, too late.

“The damage has really been done to the neighborhoods during that time,” said Austin Mao, an Airbnb host in Las Vegas. He said the costs of repairing damages from parties at his properties, which host as many as 2,000 guests a month, have been tremendous. Neighbors complained so much about parties over the summer that he converted a third of the listings to long-term rentals.

In 2016, Christopher Thorpe, an entrepreneur in Lincoln, Massachusetts, said he faced $28,000 in damages after an Airbnb guest threw an 80-person rave, complete with ticket sales, at his home. Thorpe later learned that other hosts had reported that guest for parties, but Airbnb had not removed the renter from the platform.

“Airbnb put up as many roadblocks as they could to avoid dealing with this,” Thorpe said.

Airbnb has long grappled with safety issues, said the six former employees who worked on trust and safety and who asked to remain anonymous.

Two of them said they asked Airbnb to sue people who frequently threw parties at the rentals for the damages, but executives feared that would draw attention to the events. Several also said they pushed to limit or remove the “Instant Book” option, which confirms bookings immediately without requiring approval from the host. But the feature, which was used by almost 70% of listings in 2019, boosted convenience and made Airbnb more competitive with hotels. So Airbnb did nothing, they said.

Nulty said Airbnb promoted Instant Book so hosts could not discriminate against guests by denying some of them a booking, adding that hosts can turn off the feature. He denied that executives had been urged to sue party promoters and said its legal team did not reject proposals because of concerns over public attention.

In Incline Village, which has a population of around 9,000, the Airbnb party houses have increasingly grated on residents. Shortly after Joe and Edie Farrell, retired physical therapists, moved permanently into their vacation home there last year, the house next door became an Airbnb. Blasting music and drunk people created “10 days of anxiety” around July 4, said Edie Farrell, 70.

“Airbnb is basically helping people set up a hotel in our neighborhood,” Joe Farrell, 68, said. “Now you have to worry about your safety and peace and quiet.”

In response, Airbnb said it would ban parties thrown by professional organizers that were promoted on social media. It also said it would verify that all 7 million of its listings were as advertised by Dec. 15, 2020, and announced a global hotline for neighbors to report parties. And it promoted its head of policy, Margaret Richardson, to be vice president of trust. (She has since left.)

But when the pandemic hit in March, executives scrambled to keep the company afloat. Verification stalled. (Airbnb said 40% of listings have “begun the verification process.”) The neighborhood hotline, which was supposed to be available globally, is only accessible in the United States, Canada and the Netherlands. In May, Airbnb cut a quarter of its staff, including a large chunk of its safety team. In an internal Q&A with Brian Chesky, Airbnb’s chief executive, employees protested the layoffs. One said the decision would leave guests without support for weeks, according to a list of the questions viewed by The Times. Another wrote that he would feel unsafe staying in an Airbnb or renting his home on the site because of the lack of a safety plan.

In the first week after the layoffs, safety cases piled up, former employees said. Airbnb asked many of those it had laid off to return temporarily to work through the cases; many of those workers have since remained, current and former employees said. In Dublin, the layoff plans were rescinded altogether, they said. Airbnb said the team that manages user safety is now the size it was before layoffs.

In August, Airbnb introduced more changes to improve safety. It sued a guest who held a party in Sacramento, California, that resulted in three people getting shot. It then sued another guest who hosted a party in Cincinnati, where a property manager was shot in the back while trying to break up the event.

On Oct. 19, the company sued Davante Bell, a party promoter in Los Angeles who threw parties at Airbnb mansions. “Airbnb has suffered and continues to suffer reputational harm and potential liability to third parties as a direct result of Bell’s actions,” the company’s lawsuit said.

Bell, who declined to comment on Airbnb’s suit, has been selling tickets to a new party called “Nightmare on King Bell Street Halloween Mansion Party” on social media. This week, he continued posting flyers for the event. When asked if the party would be held at an Airbnb, Bell did not answer.