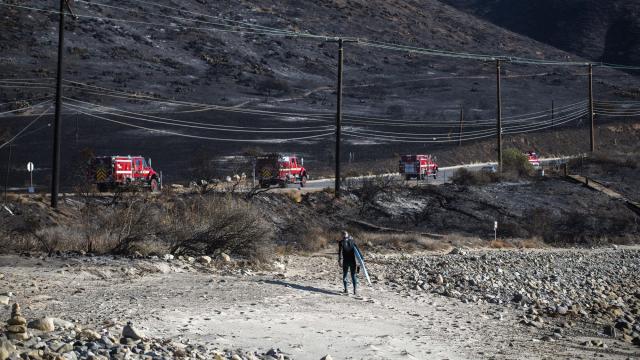 PARADISE, Calif. — The wildfires that have laid waste to vast parts of California are presenting residents with a new danger: air so thick with smoke it ranks among the dirtiest in the world.

On Friday, residents of smog-choked Northern California woke to learn that their pollution levels now exceed those in cities in China and India that regularly rank among the worst.

In the communities closest to the Paradise fire, an apocalyptic fog cloaked the roads, evacuees wandered in white masks and officials said respiratory hospitalizations had surged. Nearly 200 miles to the south, in San Francisco, the smoke was so thick that health warnings prompted widespread school closings. Even the city’s cable cars were yanked from the streets.

And researchers warned that as large wildfires become more common — spurred by dryness linked to climate change — health risks will almost surely rise. “If this kind of air quality from wildfires doesn’t get people concerned,” said Dr. John Balmes, a pulmonologist at the University of California at San Francisco, “I don’t know what will.”

At fault, researchers say, is a confluence of two modern events: More people are moving to communities in and around wooded enclaves, pushed out by factors like the rising costs of housing and the desire to be closer to nature — just as warming temperatures are contributing to longer and more destructive wildfires.

Wood smoke contains some of the same toxic chemicals that city pollution does. While humans have long been around fire, they generally inhale it in small doses over cooking or heat fires. Humans have not, however, evolved to handle prolonged inhalation of caustic air from something like the Paradise blaze, Balmes said.

Research into the long-term health effects of large wildfires is still new. But a growing body of science shows how inhalation of minuscule particles from wood fires can nestle in the folds of lung tissue and do harm to the human immune system.

The body creates zealous responses to what it sees as an alien presence, and those effects can last for years by priming the body to overreact when it encounters subsequent lung irritation, said Dr. Kari Nadeau, a pediatric allergy and asthma specialist at Stanford.

In short, researchers like Nadeau believe that a person’s short-term exposure to wildfire can spur a lifetime of asthma, allergy and constricted breathing.

By Friday morning, the death toll from the Paradise fire, north of Sacramento, had reached 63 people, with more than 600 people still missing, according to Sheriff Kory Honea of Butte County.

The 142,000-acre fire was 45 percent contained, and officials said they expected to reach 100 percent by Nov. 30. Full containment does not mean that the fire is extinguished, only that firefighters were able to complete a perimeter around the flames and stop them from spreading.

President Donald Trump was planning to visit the region Saturday, and the White House said he would tour the affected areas and meet with evacuated residents.

In recent days, as California’s air pollution map shifted from healthier green and yellow to red and purple — and then dark purple — officials from Los Angeles to Northern California urged residents to stay indoors and wear white N95 masks when they could not avoid leaving their homes. Even in Los Angeles, where smoke from the Woolsey fire had subsided by late Thursday, the air was still hazy and many schools forced children to take recess inside.

In the Bay Area, the National Weather Service said smoke would linger in the region into the coming week.

In the communities around Paradise, air quality is considered hazardous for everyone, and the county health department is urging everyone to remain inside. But this has been difficult for evacuees. More than 81,000 people have been forced from their homes and many are sleeping outside in tents, unable to find a place to sleep.

“I’ve got 18 grandkids here,” said Jewel Taylor, 50, an evacuee from nearby Magalia, standing in a hotel lobby where she had managed to find a room for the previous night. Next to her, Eli, 7, could not stop coughing.

Taylor said she was most worried about her infant grandson, 1-month-old Evan, who had developed a cough and goopy eyes. “What do you do when you see your kids like this?” she said, her voice catching. She said she had lived through other fires in the region, she added. “This is the worst. Ever.” This week, some around Paradise said that when they inhaled, they could feel the particles cutting their throats. Others likened breathing to a persistent low-level anxiety attack.

“Let me put it this way,” said Becky Dearing, 66, who already has chronic obstructive pulmonary disease, “you almost feel like you’re choking.”

“We’re like zombies,” she went on, “walking around, all the unknowns.”

The precise biological mechanics of how people develop chronic lung problems, while not fully flushed out, lie at the intersection of two seemingly disparate scientific areas, immunology and environmental study.

Immune cells that respond to foreign particles douse the particles with toxins, among other tactics, to destroy them. But an intense event like extremely poor air quality can prompt such a strong immune response that it can throw the body’s delicate network out of balance, particularly in people predisposed to asthma or allergy.

A vicious cycle can begin where each time a person experiences even small, related stress — like smoke — the body overreacts, leading to constricted air flow and intensifying the risk of heart attack and stroke for some people.

Researchers say that climate change leads to this kind of ill health through wildfire, but also through prolonged pollen seasons, dust storms and other events that affect air quality.

“We’re setting up a tipping point in the immune system that leads to more inflammation and disease,” said Dr. Sharon Chinthrajah, a pulmonologist and allergist at Stanford, speaking of the way climate change has put increased pressure on human defenses.

“California,” she added, “is being reset to a new reality.”