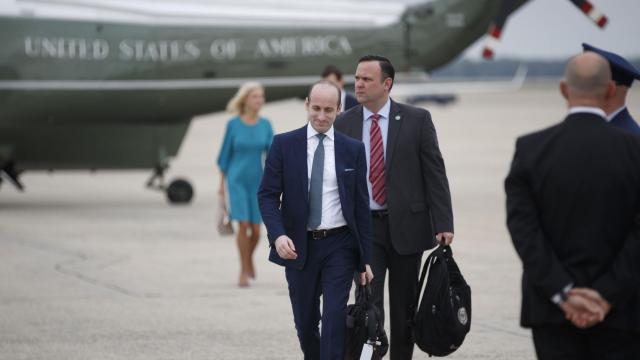 When self-inflicted damage left Donald Trump’s poll numbers sagging shortly after the Republican National Convention in 2016, the solution was to reframe the race around an incendiary issue that has animated Trump for decades: immigration.

Trump went to Arizona, where a year before he had first embraced the families of people killed by unauthorized immigrants, to give a major speech endorsing policies coveted by the most extreme immigration hard-liners.

“Anyone who has entered the United States illegally is subject to deportation,” Trump vowed. “That is what it means to have laws and to have a country. Otherwise, we don’t have a country.”

The person who helped crystallize Trump’s long-standing impulses around immigration into a political platform was Stephen Miller, his chief policy adviser. Now, as Trump searches anew for an electoral advantage, this time with his party’s control of Congress at stake in Tuesday’s midterm vote, Miller is again at his side.

In the past two weeks, Trump has followed an instinct, one nurtured by Miller, that a foreboding message on immigration can galvanize his supporters.

The president has sought to sow fear of immigrants by focusing on a caravan of people fleeing violence and poverty in their Central American countries, deploying active-duty members of the military to the border with Mexico and extolling the beauty of barbed wire as a deterrent. Trump has also resurrected one of his hardest-edge campaign proposals, calling for an to end “birthright citizenship.”

It is an agenda Miller has pushed tirelessly inside the West Wing, where he has consolidated his power around the issue, even as several other aides have split into factions or left the administration. In Trump’s world, no one has merged policy details and politics more forcefully than Miller.

Miller, 33, has become known in that orbit for amassing frightening news articles and isolated statistics about immigration that he is aware might fuel a presidential declaration on Twitter. He has helped install a group of like-minded aides across the government, including at the Department of Homeland Security, the State Department and the Justice Department, who have helped him pursue his agenda.

The result is that Trump and Miller have thrust immigration — long an issue that conservatives felt was ignored by establishment Republicans — into the spotlight again and again.

In 2016, the anti-immigration platform that the two men pushed was consistently tethered to an argument that unauthorized immigrants cost Americans jobs and were a drain on resources. But as the economy has continued to improve, it remains to be seen whether Trump and Miller will have the same effect with the issue this time.

Trump’s fiery words and attempts to push constitutional boundaries have sparked a strong reaction among Democrats and some independents. And as for Miller, his push to end protections for young immigrants under the program known as DACA and to separate children from their undocumented parents at the border have met with a public backlash. Trump was less enamored of the first policy change, but embraced the latter, until it became controversial.

“It isn’t just that DACA repeal and the zero tolerance family separation policy are incredibly unpopular politically, it is that they motivated an entirely new demographic group, college-educated women, against the administration’s immigration policies,” said Todd Schulte, president of the pro-immigration group FWD.us.

In Miller’s mind, though, those policies should be just the beginning. He has long advocated curbing the flow not just of unauthorized immigrants, but of legal ones as well, through measures like reducing refugee numbers. He has also pushed to change the rules by which immigrants who are legal residents can receive public benefits.

Miller helped draft a policy plan posted on Trump’s campaign website — and taken down after he became the nominee in summer 2016 — that called for eliminating automatic citizenship for those born inside the United States, tripling the number of Immigration and Customs Enforcement officers and defunding sanctuary cities.

The seeds of his hard-line views had been planted in his teenage years: As a high school student in liberal Santa Monica, California, he railed against announcements that were delivered in both English and Spanish. He honed those views over several years in Washington working as a press aide to Sen. Jeff Sessions, an immigration hard-liner who is now the attorney general.

In 2016, Miller began serving as a warm-up act for the president at his rallies, supplying a hypercharged, more polished version of Trump’s immigration talk.

“Everybody — everybody — who is trying to stop Donald J. Trump wants that border to be wide open,” he boomed, later asking, “When did we forget that a country exists to serve its own citizens?” A few days later, in Las Vegas, Miller asked the crowd, “How does it help America or lift up America or support America to bring anyone into this country who rejects our values, rejects our way of living?”

Once inside the administration, Miller drew notice for declaring on a Sunday morning television program, after he and Steve Bannon, then chief strategist in the White House, had pushed through a travel ban targeting Muslim countries, that the president’s powers “will not be questioned.”

To be sure, Miller is not the only person around Trump who has seen the immigration debate as having political value. With Trump’s grip on his party tightening in the past year, he has pulled many Republicans toward his and Miller’s views on policies they might not have supported before, such as reductions to legal immigration.

Other advisers saw the issue gaining traction beyond the Republican base in the years before the 2016 election, particularly in relation to the economy. A 2014 polling memo from Kellyanne Conway, now the counselor to the president, took note that deportations of unaccompanied children crossing the border had seized national attention.

“The time appears ripe for a national immigration conversation. There is a new open-mindedness to populist approaches, regardless of partisan or ideological preferences,” Conway wrote in the memo, which was issued during a midterm cycle in which the immigration debate added to Democratic losses in the Senate.

At a rally in Johnstown, Pennsylvania, in October 2016, Miller delivered a populist message of his own, taking aim at the elites who he said were making policy in Washington.

Miller, who now lives in a sleek condominium building sheathed in glass in a trendy area of Washington, said people had no idea how corrupt the system was.

They “look down from their glass-windowed condominiums at all of you,” he said. “As bad as you think it is, it is so much worse.”