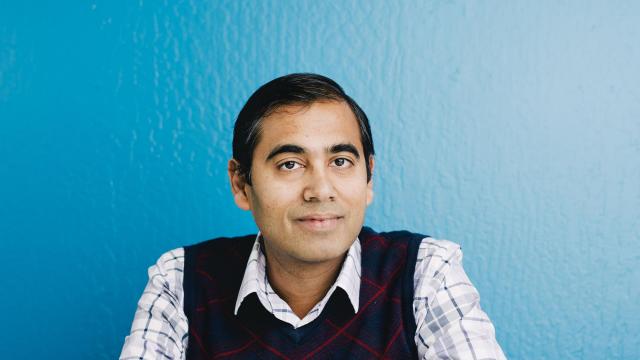 One day this fall, Ashutosh Garg, chief executive of a recruiting service called Eightfold.ai, turned up a résumé that piqued his interest.

It belonged to a prospective data scientist, someone who unearths patterns in data to help businesses make decisions, like how to target ads. But curiously, the résumé featured the term “data science” nowhere.

Instead, the résumé belonged to an analyst at Barclays who had done graduate work in physics at the University of California, Los Angeles. Though his profile on the social network LinkedIn indicated he had never worked as a data scientist, Eightfold’s software flagged him as a good fit. He was similar in certain key ways, like his math and computer chops, to four actual data scientists whom Garg had instructed the software to consider as a model.

The idea is not to focus on job titles, but “what skills they have,” Garg said. “You’re really looking for people who have not done it, but can do it.”

The power of such technology will be immediately apparent to any employer scrambling to fill jobs in a tight labor market — not least positions for data scientists, whom companies like Google, Facebook and Amazon are competing to attract.

Thanks to services like Eightfold, which rely on sophisticated algorithms to match workers and jobs, many employers may soon have access to a universe of prospective workers — even for hard-to-fill roles — whom they might not otherwise have come across.

And while that could also help some candidates, there’s a potential downside for job seekers: Such algorithms may also lower wages in these fields, said Bo Cowgill, an economist at Columbia University who has studied the use of artificial intelligence in hiring.

“You get the more nontraditional, equally qualified, equally high-performing people,” Cowgill said. But the employer “doesn’t seem to have to compete for them as much.”

For years, employers and online intermediaries have used algorithms to help fill job openings, but their methods were often crude. A computer would identify key words on résumés, then determine whether those words corresponded to text in job descriptions.

While this approach can be more efficient than manually searching a site like LinkedIn, it has drawbacks. Applicants can game the process by larding their résumés with terms the machines are likely to be looking for. Conversely, poorly worded job listings could cause computers to overlook qualified candidates.

But recent advances in a form of AI known as deep learning have made the machines used by some companies, like Eightfold and online job hub ZipRecruiter, far more powerful. Instead of simply scanning words on a page and matching them to words in a job description, a machine can now identify skills and aptitudes that don’t explicitly appear on a candidate’s résumé.

To illustrate, Garg points out that about 90 percent of software engineers at the financial software company Intuit in Mountain View, California, know the programming language Java, according to data Eightfold has analyzed. That means the machine is on safe ground inferring that an Intuit software engineer knows Java, even if he or she doesn’t list the skill on a résumé.

By performing a similar exercise across an entire résumé, the company’s software can build a detailed profile of a job applicant. It can extract more than the usual amount of information from categories like education (certain disciplines at less prominent universities, like natural-language processing at the University of Massachusetts, Amherst, produce high-achieving workers) and even hobbies (chess players tend to be good at coding, basketball players at sales).

Eightfold, which is based in Silicon Valley, also makes a clever trade with clients: to improve its results, Eightfold asks clients to use its human-resources software, which imports employee data in anonymous form. This includes information on how workers with different backgrounds perform in different jobs, and how much they earn.

Eightfold can then use this data to better predict performance — say, how well an Intuit software engineer who plays chess and graduated from the University of Massachusetts might do at Amazon or Microsoft.

Intuit did not respond to a request for comment.

The software tool can be especially powerful to an employer intent on expanding a search beyond candidates with conventional experience and qualifications. In that case, a recruiter can specify criteria (like industry and location, and even how likely the candidate is to accept an offer) that would turn up less traditional résumés. Claudia Villanueva, a recruiting and diversity official at AdRoll Group, which helps clients with digital ads and marketing, said she recently used Eightfold when trying to fill a financial-planning position. The top candidate had experience in industries the tech world often shuns, like manufacturing. But the Eightfold algorithm flagged her as a winner.

“The tech industry sometimes has a hard time moving past tech experience,” Villanueva said. “We keep hiring the same people in the industry. To me this is a really interesting example of how we broke that cycle a bit.”

In the case of the Barclays analyst, Eightfold’s software pegged him as a budding data scientist partly because he had a master’s degree in statistics and knew computer programming languages like C++ and Matlab, even though he had no apparent background in data science.

“We have gone ahead and analyzed tens of millions to hundreds of millions of profiles of people to see how people have moved in their career,” Garg said. “You can predict what they’re likely to do next very easily.” He conceded that the approach worked less well in new or obscure fields with limited data. Steve Goodman, chief executive of Restless Bandit, another firm that applies AI to recruiting, compared the exercise of finding nontraditional candidates to filling a professional sports roster.

Sports franchises tend to pay far more for free agents who leave their previous team than for players they draft out of college or high school, because the free agents have a record. But if computers were able to predict the performance of draft picks with relative precision, this could change their calculus. The price of free agents might drop, and the price of signing a draft pick would rise. This is, in effect, what software can accomplish using AI.

“We surface people we think would be good draft picks,” rather than people doing the same jobs, Goodman said. “This person is a little more junior, but based on their career track, people who look like them are cheaper and better for you.”

Cowgill, the Columbia economist, said this logic was largely correct, but with one key wrinkle: According to his research, the gains to the less obviously qualified candidates unearthed by machines can be so large that they offset smaller losses to conventional candidates.

In a technical field like software engineering, for example, a dropout from a no-name university could end up making a very comfortable living after becoming known to employers. But established coders are sufficiently in demand that wages are likely to remain high even as it becomes easier to find alternatives.

In fields requiring fewer technical skills, on the other hand, wages could fall significantly.

Consider, say, senior marketing jobs, for which large companies often require a master’s degree in business administration. If machines can reliably identify less experienced, less credentialed candidates who are likely to excel, it could depress wages.

“You can think of cases in the product market where people thought they needed something special and you really didn’t — the commodity, low-cost person took over,” said John Horton, a labor economist at New York University. Think of hand-held video cameras after the proliferation of smartphones.

“That could happen in labor markets with the realization that you don’t need anything special here,” Horton said.

All of this presumes, however, that deep-learning technology is viable for use in recruiting and human resources and could eventually become commonplace. Surveys suggest that only a small minority of companies have adopted these tools, and that even fewer feel prepared to exploit them.

A recent paper summarizing the findings of a conference at the University of Pennsylvania, involving roughly 20 employers, cited a variety of problems. Among them were the difficulty of measuring employees’ performance and the sense of unfairness that workers might feel if a computer were to make hiring, firing and promotion decisions.

Perhaps the greatest concern is a basic methodological point — call it the NBA problem. If you were studying National Basketball Association players to figure out what makes one great, you would find almost no correlation between performance and height. Almost everyone in this rarefied world is taller than average. And those who aren’t compensate with other gifts, like unusual speed and athleticism.

If, on the other hand, you selected people at random from the general population and gauged their basketball potential, you would find that it was highly correlated with height.

The concern is that machines are, in effect, only studying NBA players — the people who already have jobs at a company, or even the people who sought jobs — not the general population.

Cowgill believes there are solutions. He wrote a paper showing that seemingly unqualified applicants whom a company accidentally interviews allow a machine to simulate a crude randomized experiment, helping the company learn more about what makes a good employee. But perhaps more telling is that sophisticated technology companies are using AI to help fill jobs. Garg, who worked as a research scientist at Google for four years, says the company uses such techniques in its recruiting.

Google says it uses machines to take a second look at résumés in its database that human recruiters may have missed for a limited set of roles.

The advantage that a vendor like Eightfold has, Garg asserted, is access to internal data at dozens of other companies, something even Google can’t claim. “We now can build much deeper models than these companies can build by themselves,” he said.