Raleigh, N.C. — A curfew has been lifted across the city of Raleigh, Mayor Mary-Ann Baldwin announced on Saturday morning.

Baldwin announced the curfew on Friday afternoon ahead of planned protests in downtown Raleigh. The curfew was scheduled to run from 10 p.m. until 5 a.m. Saturday.

One protest was over the police shooting and killing of Walter Wallace Jr., a 27-year-old Black man in Philadelphia. That protest had been planned from 3 to 6 p.m. on Fayetteville Street but was canceled after the curfew was called and police were deployed downtown.

A second protest was set to begin at about 7:30 p.m. at LeVelle Moton Park on East Lane Street was also canceled around 8 p.m., according to the group Smash Racism Raleigh.

At around 7:30 p.m., about 50 people gathered at the park. There has been a heavy law enforcement presence in the area Friday night with barricades put up around the courthouse and Capitol building, similar to the ones put up for previous protests. Many downtown businesses also boarded up in anticipation of vandalism during the protests.

Raleigh police did not charge or arrest anyone for trespassing, according to officials. One person was cited for a seatbelt violation. 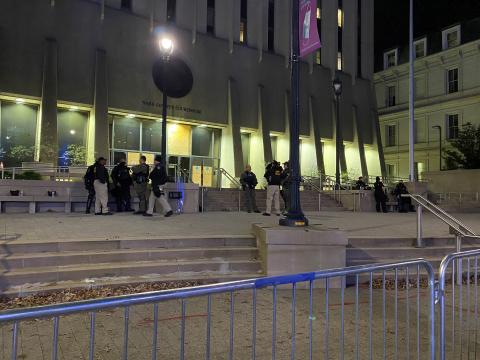 "Most people feel empathy toward the whole equality issue and want to do something about it," Baldwin said. "[But] everybody is still remembering May. It's hard to forget – our downtown still is in recovery mode."

The death of George Floyd in Minneapolis sparked nationwide protests in May. In Raleigh, some of those protests led to vandalism, looting and arson downtown.

To break up the demonstrators, Raleigh Police used foam bullets and tear gas.

'Destruction is not the answer:' After Raleigh riots, those arrested express regret

"Every time we have a protest with vandalism, it angers people," Baldwin said. "What we want to see is peaceful protests. We want to protect your constitutional rights, but we also want to respect others just like you want to be respected."

Police have been going door to door downtown this week to warn businesses and nearby neighborhoods about the protests, handing out fliers and encouraging people to enable any security cameras they have, to close and secure doors and to be alert.

“It just said that (Friday) night, there’s a protest, and it was a black flier with a pumpkin on it,” said Debra Hison, who lives in the historic Oakwood neighborhood.

Hison said police stopped by her house Thursday morning to warn her about protests possibly getting out of hand. She said this was the first time she’s seen Raleigh police approach her for something like this and said she plans on staying home.

“I’m going to see what’s going to happen, but I really have no control over what people are doing,” she said.

“[It's] just to let us know the details and size, but they just wanted to keep us informed ahead of the curve,” Oakwood resident Tedd Weigele said about the notice.

The Raleigh Police Department said it will provide security, crowd control and traffic direction. State Capitol Police placed some 300 gates around the Capital for security.

Employees at several downtown businesses said police also warned them about potential protests, but some business owners didn't want to speak publicly for fear of being targeted Friday night.

For the fourth time since May, businesses downtown boarded up their windows Friday morning in preparation for the protests.

Reliable Jewelry & Loan on Wilmington Street had major damage and looting during protests in late May, and owner Alan Horwitz said he has since installed special glass that won't shatter. Still, his staff was putting up boards.

"We've upgraded our security measures, which I never thought I would have to do in downtown Raleigh. But right now, everything is so unpredictable, and I don't want to take any more chances," said Horwitz, whose family has owned the store since the 1930s.

"We're just getting tired of having to take these precautions every time something happens in a different city," he said. "None of us have a problem with marching and protesting as long as it's not taken to that other level of affecting business owners who have done nothing wrong."

"I am praying for peace and grace. We need that right now," she said. "We need to bring our community together, not tear it apart. Destroying property doesn't do that. It has the opposite effect."

Weigele said he’s not too concerned and welcomes the right to protest.

"I don't feel like anyone needs to board up or anything but just keeping an eye on everything," he said. "To me it's a beautiful thing ... people able to practice democracy. But there's obviously a lot of tension, so I feel everybody's pain."

Downtown Raleigh Alliance officials said they were aware of the possible protests and had sent a memo to many business owners to warn them and provide tips on how to protect themselves and their business if things get out of hand.