After Lives on the Streets, Mexican Women Find a Haven for Healing 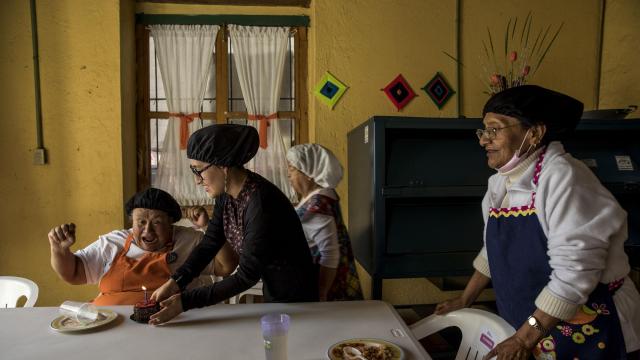 MEXICO CITY — Marbella Aguilar keeps her collection of used books tucked into a hidden shelf in her room at Casa Xochiquetzal, a big yellow colonial house in the heart of Mexico City’s bustling downtown.

“I love reading and writing,” said Aguilar, 61. “Poetry, prose, anything. I can’t go to sleep without my books next to me.” She mentions “Les Misérables” and “Lolita” and the works of Pablo Neruda and Leo Tolstoy.

But her own experiences could fill a book, because she has not had an ordinary life. And Casa Xochiquetzal is no ordinary house: It is a shelter for retired or semiretired prostitutes.

Casa Xochiquetzal, named after the Aztec goddess of beauty and sexual love, opened its doors in 2006 after Carmen Muñoz, a former prostitute, discovered some of her former colleagues sleeping under cardboard in La Merced, a popular red-light district nearby. After a lifetime spent working the streets, the women were destitute and alone, and had nowhere to go.

Muñoz took them in and began looking for allies. A group of prominent Mexican feminists offered to help, and with private and public money, plus a building lent free of charge by the Mexico City Mayor’s Office, they founded Casa Xochiquetzal, a haven where older prostitutes rescued from the streets could live with dignity.

“It is a recurrent fact that family members, even their children, abandon them, even hurt them, when they find out they are sex workers,” said Jesica Vargas González, the shelter’s director. “It is still a very stigmatized occupation.”

It is not easy to find the house. It is hidden behind a maze of street vendors. The large wooden doors to the entrance are usually locked. “Visitors are only allowed with a previous appointment made by email,” says a sign out front.

During a visit one recent morning, one of the residents, who asked to be called Sol, yelled, “Breakfast is ready!” from the patio, hands around her mouth and looking up to the wraparound balcony on the second floor.

The 16 current residents, ages 53-87, are responsible for cooking all their meals and cleaning their rooms and all the public areas. They follow a schedule that details mandatory tasks, but individual approaches to assigned work can cause bickering among them.

“I like it all sparkling clean,” said Rosa Belén Calderón Velázquez, 68,who seemed always busy mopping the floors or dusting. “My mother used to say, ‘Do it well or do not do it at all,'” she said with an exasperated look on her face.

Residents also have to take part in the two daily crafts and cooking workshops. The single television, in the patio, is turned on only after 6 p.m.; there is a rotating schedule for who gets the remote control. No drugs are allowed in the house.

Sometimes women who are not retired prostitutes are temporarily taken in, usually homeless women who are victims of abuse. All the women receive medical and psychological treatment.

“These are women who need much love, who feel much loneliness,” said Karla Romero Téllez, 29, the shelter’s volunteer psychologist. “But they are very strong. They are survivors. That is what defines them.”

Violence and abuse, damage and loss, are the threads that link all the stories in the house. Maria Norma Ruiz Sánchez, 65, was raped when she was 9, while walking back from school in a small rural town in Jalisco. The scar on her left thigh from the knife ripping off her school uniform is still there.

She ran away from home at 14, to escape her abusive brother. A truck driver gave her a ride to San Francisco. There, she spent her 15th birthday alone in a bedroom, eating chicken sandwiches and drinking beers.

But before long she returned to Mexico. She had the first of her four children at 16, worked in the fields, owned a cabaret, became a professional wrestler and had countless lovers but only one real love. She also tried to kill herself four times, the last time in a rented room at the Bar Nebraska on the outskirts of Guadalajara.

Sánchez still occasionally goes to her office, as she calls it, a park by the Hidalgo subway station where new clients and old memories converge in a haze. “I’m very tired, everything hurts,” she said. “I make jokes about my life so I can live day to day, but my sadness has no end.”

In the afternoon, the winter sun poured in, a yellow pleasant light filling the patio. It was quiet. The thick walls filtered the noise outside. The residents, once so familiar with the frenetic, overwhelming pace of the streets around them, now quietly watched life on those streets unfolding from a distance, peeking out from behind the house’s tall windows.

Aguilar works across the street, at a doll shop. She does not like to talk about her past, and every time she starts her story she cannot hold back the tears. Instead, she recited part of a poem she wrote:

I am the one who loves you

I am the one that warms you when you are cold

And even when you ignore me

I’ll always be there for you.