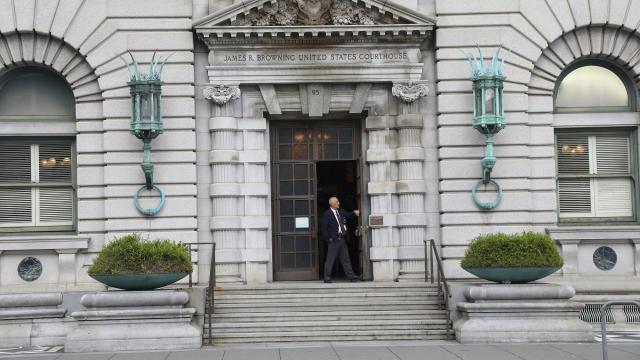 WASHINGTON — President Donald Trump lashed out on Tuesday against the 9th U.S. Circuit Court of Appeals, based in San Francisco, calling it a lawless disgrace and threatening unspecified retaliation.

“That’s not law,” he said of the court’s rulings. “Every case that gets filed in the 9th Circuit we get beaten.”

Trump’s remarks came after a federal trial judge ordered the administration to resume accepting asylum claims from migrants no matter where or how they entered the United States.

The ruling was issued by Judge Jon S. Tigar, of the U.S. District Court in San Francisco, and not by the 9th Circuit itself, which hears appeals from that court and others in nine Western states. The appeals court’s geographic jurisdiction is also sometimes called the 9th Circuit.

“This was an Obama judge,” Trump said of Tigar, who was indeed appointed by President Barack Obama.

Trump, who has suffered losses in courts across the nation, said he was frustrated by the ability of plaintiffs to file challenges to his administration’s policies in the 9th Circuit.

It is true that plaintiffs who have a choice tend to file their lawsuits in courts they hope will rule in their favor. Plaintiffs challenging the Obama administration’s health care, immigration and other programs often filed their lawsuits in Texas before conservative judges. The state of Texas alone sued the Obama administration at least 48 times, according to a survey conducted by The Texas Tribune.

Trump said courts in the 9th Circuit always ruled against his policies. “Everybody that wants to sue the United States, they file their case in the 9th Circuit, and it means an automatic loss no matter what you do, no matter how good your case is,” he said.

That was an overstatement, though the administration’s track record in the 9th Circuit has been poor. Just this month, a three-judge panel of the appeals court ruled that Trump could not rescind the Obama administration’s protections for some 700,000 “Dreamers,” young immigrants who were brought into the United States illegally as children.

Also this month, a federal trial judge in Montana, which is part of the 9th Circuit, blocked Trump’s decision to allow construction of the Keystone XL oil pipeline, saying the administration failed to present a “reasoned explanation” for the move and “simply discarded” the effect the project would have on climate change.

Trump pointed out on Tuesday that the Supreme Court in June had reversed a ruling from the 9th Circuit blocking his order limiting travel from several predominantly Muslim nations. Trump vowed to win the asylum case in the Supreme Court, too.

The 9th Circuit has a reputation for being frequently reversed by the justices, but its reversal rate is only a little higher than average and not as high as that of some other circuits.

Trump vowed to take steps to address his unhappiness with the court. “I’ll tell you what,” he said, “it’s not going to happen like this anymore.” But it was not clear what he proposed to do.

“The 9th Circuit is really something we have to take a look at because it’s not fair,” he said. “People should not be allowed to immediately run to this very friendly circuit and file their case.”

Limiting the court’s jurisdiction would require legislation and could raise constitutional issues. But there are other ways Trump could address his misgivings about the court.

The most obvious is to change its composition of 16 Democratic appointees and seven Republican ones. Trump has already appointed two judges to the court, and he has six more vacancies to fill. Once he does, the court, which is authorized to have 29 active judges, will be nearly evenly divided between Democratic and Republican appointees.

The court’s decisions affect a fifth of the nation’s population and a third of its land, in nine states and two territories. There have been periodic calls to split it into two or perhaps three smaller circuits.

But it is not clear that such a move would assuage Trump’s concerns. If plaintiffs challenging his administration’s policies remained free to file where they wished, they might continue to pick a federal court in San Francisco.