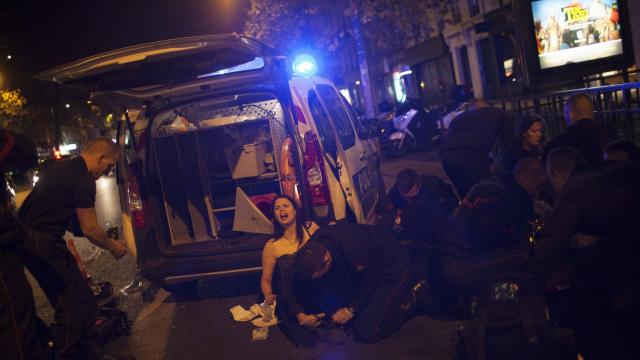 PARIS — Three years to the day after he lived through the worst terrorist attack in France’s modern history, Fred Dewilde and other survivors, neighbors and families of victims gathered Tuesday for a subdued commemoration in the area of Paris hardest hit by the violence.

“We don’t really know each other, but we do understand each other and we’re here for one another,” said Dewilde, 51, who was at the Bataclan concert hall on Nov. 13, 2015, and attended the memorial held in a square nearby, where the crowd released balloons into the sky. “We’re all citizens of the 13th.”

For France, especially for the Paris area, the initial sense of horror gave way to an outpouring of grief, then public defiance. But enough time has passed that many of those who lived through the attacks — like Dewilde, a medical illustrator turned graphic novelist — have moved on to processing the trauma through writing, film and the arts.

A spate of books, graphic novels, documentaries and exhibitions has emerged, as artists and their audiences try to capture and understand that terrible day.

“It is the media, the history books, the artistic works, the graphic novels that circulate widely that are going to help in the construction of a collective memory,” said Denis Peschanski, a historian at the National Center for Scientific Research in France. He is a co-leader of a project that uses the events of Nov. 13 to study how the memory of trauma changes over time.

“Memory is a puzzle,” Peschanski said. After a traumatic event, whether people were in immediate danger or just watching on television, they instinctively want to “find the pieces of a puzzle,” he said.

Creative works are now filling in some of those gaps.

They are personal, but also trace aspects of the attacks that many people will recognize — a body of art that also serves as shared testimony. In addition to the therapeutic value they have for victims and witnesses, the artistic endeavors, many of them open to interpretation, can help others understand what they and their society are going through.

The documentary film “November 13: Attack on Paris,” which was released on Netflix in June, immerses the viewer in an overwhelming event, showing the trauma to individuals, to a neighborhood and to Paris, but it also shows how ordinary people could and did survive it.

Catherine Bertrand, who returned to the Bataclan on Tuesday for a ceremony for survivors and families, is one of those who lived through the massacre and was moved to express her experience artistically. Her graphic novel “Chronicles of a Survivor” tells of her struggle with post-traumatic stress, depicting it as a crushing black ball, far larger than she is, that waits for her when she wakes up in the morning and weighs her down, day after day.

The ball brings nightmares, erases her memory of how to do her work and makes her cry easily. She feels distant from friends and family.

She learns about her condition and accepts that she needs help, and gradually, the immense ball shrinks. By the book’s end, she can hold it in her hand and says: “One day I will manage to throw that ball away and free myself.” Even people who had experienced traumas unrelated to the Paris attacks have told her they found solace in her work, she said.

“A father told me that he had lost his son and that after that he had cut himself off from those close to him because they did not understand,” said Bertrand, 38. “When he read my book it made him feel so good that he wrote to thank me. This is my most beautiful success.”

While ambitious ideas for tributes to the victims have been met with skepticism, even scorn — including a proposal by the American artist Jeff Koons to install a colorful sculpture representing a bouquet of tulips, and a government plan to dedicate a “museum-memorial” — more-personal creations have flourished.

“With my book, I wanted to lay one little brick that I thought may help rebuild the wall destroyed by this tragedy,” said Aristide Barraud, 29, the author of “But Don’t Sink,” one of several memoirs written by survivors.

Barraud, a former professional rugby player, was shot three times as he shielded his sister with his body. He nearly died, suffering injuries that ended his playing career.

For him, writing the book was a way to cope with the trauma, and to fill the void left by his sport.

Like Bertrand, Dewilde, 51, was moved to use illustration to express his struggles. One of his two graphic novels about the attack, “The Bite,” illustrated with finely drawn pen-and-ink sketches, is as much a parable of transcending hatred as it is a memoir.

He depicts his emotions in “The Bite” as a black stain on his arm that spreads and morphs into a serpent, and portrays the Bataclan killers as skeletons. The stain feeds on each of the successive terrorist attacks that touched France over the following year, including the killing of a priest and the use of a truck to mow down scores of pedestrians in Nice on Bastille Day 2016.

At the book’s end, Dewilde’s character vanquishes the dark stain and malevolent serpent, finding that he has the strength to leave them behind.

While no one work can contain an event as vast as the Paris attacks, the documentary “November 13: Attack on Paris” by the award-winning filmmakers Jules and Gédéon Naudet manages to capture the day in its alternating normality, horror and heroism.

As Paris natives who had made a documentary about the 9/11 attacks on the World Trade Center, they were drawn to do the same for Paris.

Their Nov. 13 documentary relies on eyewitnesses — victims who survived, firefighters, police officers and government officials, including the president at the time, François Hollande. They obtained contemporary footage from a television crew traveling with some of the firefighters who responded, and from the offices of the emergency dispatchers.

The result is a remarkable three-part account that opens with the kind of postcard images of sunrise over Paris that are beloved by morning news shows, and moves through the day and night, intersplicing interviews with 42 people who were there.

The main point is not to forget either the good or the bad, or to become too emotionally distant from what happened, Gédéon Naudet said.

In New York, “firefighters, family, friends, the people who survived, they are extraordinary, their basic response was positive in the sense that they did not want to let what happened to them destroy them,” he said. “It was the same spirit in Paris.” They were in Manhattan on Sept. 11, 2001, so their cameras captured the disaster as it unfolded.

“In 9/11, you were there because we were there,” said Jules Naudet. They did not witness the Paris attacks, but wanted the same immediacy, so they asked those they interviewed to speak in the first person and in the present tense.

“Here we wanted to recreate the same thing but without the images, with only being in the people’s heads,” Jules Naudet said.

The Naudet brothers decided to show not only the horror and destruction of terrorism, but also the resilience that survives.

“None of the survivors talk about hatred, revenge, and killing,” Gédéon Naudet said. “You have a choice: You go the dark way or you go the way with light.”