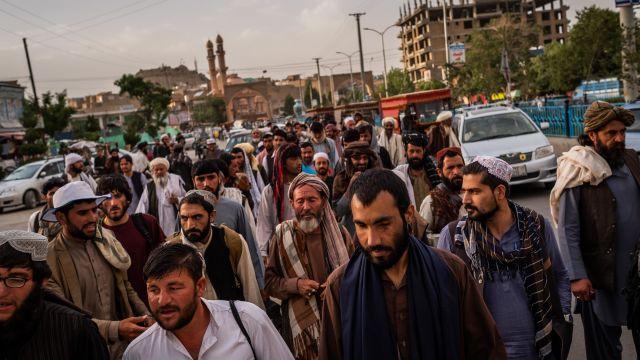 GHAZNI, Afghanistan — The Afghan government declared Saturday that there was no longer a cause for concern about the strategic southeastern city of Ghazni falling to the Taliban.

However, a reporter for The New York Times who entered the city Saturday morning found insurgents confidently in control at every intersection. At Sanayi High School, where the day before there had been a large Afghan police check post, now there were a half-dozen Taliban fighters armed with rocket-propelled grenade launchers and AK-47s.

“As a civilian your life is important to us, so you should go back to your village or home now,” their leader, wearing a black turban, told the reporter. “We don’t want to kill you, but we have orders not to allow civilians out in the city.”

Both the government and the insurgents claimed to be in control. With cellphone towers destroyed, communications were sporadic and information from Ghazni was scarce.

A city of about 280,000, Ghazni is on the main highway between Kabul, the capital, and the country’s second-largest city, Kandahar.

Taking Ghazni, even briefly, would be the Taliban’s most important victory yet. While they had briefly overrun the small cities of Farah, earlier this year, and Kunduz twice, in 2015 and 2016, neither of those cities have the symbolic and military importance of Ghazni. Taliban control of the city would not only cut off northern Afghanistan and the capital from the traditional Taliban homelands in the south, it would also prove a severe defeat for the U.S. and Afghan strategy of holding population centers rather than territory.

Afghans also revere Ghazni as a seat of ancient culture, once the capital of a vast empire that ruled modern-day India. Its many monuments and archaeological sites earned it a designation as the Asian capital of Islamic culture in 2013.

Residents fleeing the city described streets littered with the unrecovered bodies of policemen, insurgents and civilians a day after the Taliban staged a large-scale attack in an effort to overrun the strategic city. And they saw no sign of any government counterattack. Government radio and television was shut down and only Radio Shariat, a Taliban station, was broadcasting.

It was a picture completely at odds with what Afghan officials were saying in Kabul.

“Overall, the situation is under our control in Ghazni, and the problems are not that serious,” Najib Danish, spokesman for the Ministry of Interior, said at a news conference. “The concern about the collapse of the province to the Taliban is gone now.”

Danish confirmed that 25 Afghan security forces, as well as one Afghan journalist, had been killed in the fighting.

Along a 3-mile stretch of the city, there were four Taliban checkpoints, each with a commandeered car and a pair of motorcycles among four fighters, who appeared on their guard but unworried.

There was no sign of U.S. airstrikes or helicopters Saturday, as there had been the day before.

On the city’s outskirts, families were streaming out of the city. A woman named Mina, a widow traveling with her five small children, said insurgents had come to her house the night before and set up a fighting position on her roof.

“You can stay downstairs if you want to — or leave, it’s OK — but we are going to fight from your home against the police,” she said the Taliban told her. She and her children carried only a small bag of clothing each and the children were barefoot. She said on the way she had counted at least 17 bodies in the street — police, Taliban and civilians.

“I stopped counting because we were too scared,” she said.

Taliban sources had little to say Saturday, other than claiming to have destroyed many checkpoints in the city. They said they were continuing to fight.

The Taliban spokesman, Zabihullah Mujahid, did claim in a Twitter post that the insurgents had “liberated” the city’s prison, releasing everyone inside. He did not say how many prisoners were inside.

Afghan reinforcements traveling to Ghazni from Gardez, to the east, and from Kabul, to the north, encountered repeated ambushes, destroyed bridges and delays, according to Afghan officials.

A pro-government militia commander, Ali Zafar, who was guarding a portion of a highway between Kabul and Ghazni, said Saturday that his positions had been repeatedly attacked by the Taliban. But his group had managed to keep the road open for a reinforcement convoy of more than 150 vehicles, he added.

“Today, the road is blocked and yesterday they blew up a bridge on the highway, but that was after the reinforcement convoy passed,” he said, adding the situation in Ghazni was not good.

Ahmad Farid Omary, head of Ghaznawyan TV, a Ghazni station, said most broadcasters were forced off the air because their employees had fled. The only broadcaster still operating, Omary said, was Radio Shariat, a Taliban station, which was using a mobile van to go on the air, changing its location frequently.

“Reinforcements got to the city yesterday, but they haven’t started fighting,” Omary said. He said that many Taliban fighters had taken refuge in people’s homes, but that government forces were preparing a counterattack to recover lost ground. Many of the reinforcements that arrived were apparently holed up in the army’s battalion headquarters about 5 miles north of the city proper.

What was normally a two-hour trip took all day, Zulfiqar said, and they arrived at the army’s battalion headquarters after dark.

He added: “Yesterday they controlled 100 percent of the city except for the governor’s office and the Police Headquarters.”

Danish, the Interior Ministry spokesman, said the government was being cautious about what he called a “clearance operation” because of risks to civilians.

There was no evidence, however, that the city had been cleared of insurgents by the end of the day, when fighting appeared to be spreading to the districts bordering Ghazni city as well.

City residents continued throughout the day to flee Ghazni, but only on foot as the insurgents had mined the roads heavily and were refusing to allow civilian traffic.