Cary, N.C. — Investigators have determined that a house fire in December was linked to a faulty surge protector.

According to Tuesday's statement from the Cary Fire Department, the Dec. 28 fire is at least the fifth in Cary to be connected to a specific kind of surge protector, which is often installed with heating and air conditioners by contractors. 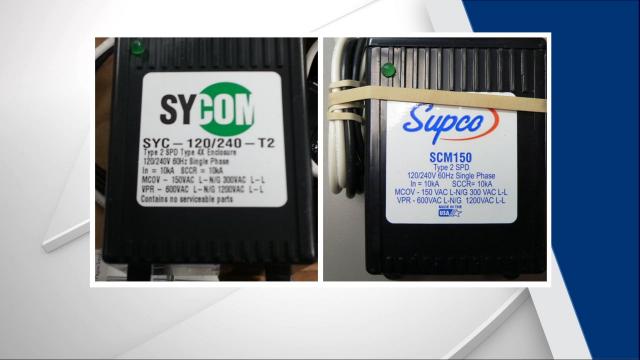 According to Cary officials, these models are deemed potentially hazardous by UL, a global safety consulting and certification company.

Homeowners are asked to spread the word and check their surge protectors. In the most recent fire, investigators determined that a Supco surge protector on the home's A/C unit caught fire, scorching the side of the home.

"My husband and I were sitting in the kitchen...I looked outside the side window and I saw smoke coming off the ground, I thought it was a haze from the weather," said Judy DiDonato. "I opened the door and I smelled something and my son ran out front, and when I went out behind him he said, 'Do you have a fire extinguisher?'"

If a device bearing one of the labels below is identified at the home, citizens should contact a licensed electrician or heating and A/C contractor.

More label information can be found on the town's website.