Durham, N.C. — Genevieve Burbridge is mourning the loss of her pet, Pom Pay, after the horse was struck by a car Saturday night.

Burbridge was walking Pom Pay on North Willowhaven Drive around 9 p.m. when she saw headlights coming at her. The crash was so sudden that she did not see her horse get hit, but her sister-in-law, who was behind her, did.

In the darkness, the women were not able to get a vehicle description or license plate number, but Burbridge hopes evidence found at the scene, including a windshield wiper, will help authorities track down the driver.

The Durham County Sheriff's Office said they are treating the crash as a hit-and-run investigation. It was so dark when Pom Pay was hit that the driver probably didn't know if they hit a person or an animal, officials said. It's important to find the driver so it doesn't happen to another animal -- or person.

"They made the point that the same driver could hit a human next time," Burbridge said. 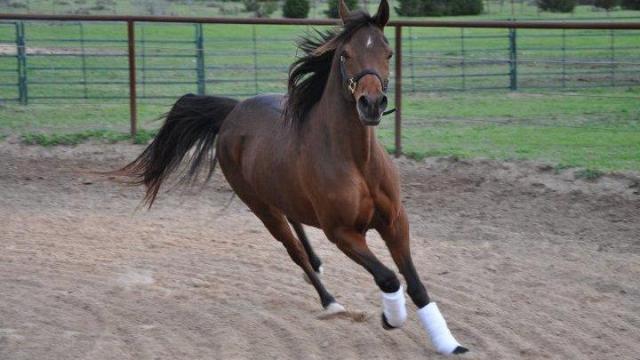 Officers called a veterinarian to the scene to assess Pom Pay's injuries, and the horse was euthanized at the site of the crash.

"It was a gruesome few hours," Burbridge said. "For the first few days I was traumatized."

Seven years ago, Burbridge got Pom Pay, a beautiful Arabian horse, from a friend. Burbridge hadn't owned a horse before but learned to ride with Pom Pay and quickly became a dedicated horse owner.

"When I met her, it was one of those weird things," she said. "It was an immediate connection. I just learned as fast as I could how to take care of her."

Since the crash, Burbridge said residents from at least 12 surrounding neighborhoods have been posting their concerns about the road on Nextdoor.

"It's amazing what people have been saying," said Burbridge. "The number of people who came out that night was surprising."

Burbridge said, the night of the crash, she heard even more stories.

A mother of two said her kids play near North Willowhaven Drive. She told Burbridge she successfully petitioned four years ago to have the speed limit reduced to 25 mph, but it never helped.

"She said since then it's almost like the speeding has gotten worse on that road," Burbridge said.

Another woman told Burbridge she walks her dog along the road often and is constantly having to jump out of the path of speeding cars. A third neighbor said her daughter was hit by a car 30 years ago while sledding in the area.

The neighbors are considering asking for changes like more patrolling or speed bumps. "A lot of people have said we can't let this continue, we have to do something about it," said Burbridge, who hopes the death of her horse could somehow make a difference.