After a California Wildfire, New and Old Homeless Populations Collide 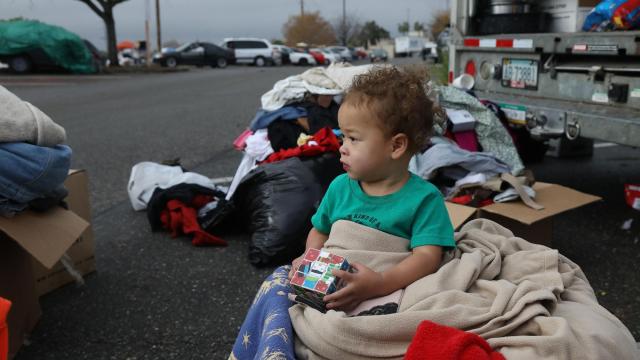 CHICO, Calif. — Even before the first flames of the Camp Fire ignited, there was already a state of emergency in the wooded hills and farmlands north of Sacramento.

The homeless situation in parts of Butte County was so bad that the county formally declared a crisis in October in order to secure millions of dollars in state aid.

And then came the fire, destroying nearly 14,000 residences and adding an entirely new population of tens of thousands of people to California’s long-entrenched homeless crisis.

“It was already a pretty dire situation,” said Laura Cootsona, executive director of the Jesus Center in Chico, one of a handful of primary homeless shelters in the county.

In the post-fire reality, after 52,000 people were evacuated, the number looking for some place to live has grown exponentially almost overnight.

“If they end up in the county and need homes,” Cootsona added, “that’s just the largest disaster you can imagine.”

Now, almost a month after the fire erupted, with the weather worsening and evacuation shelters closing or relocating farther away, tensions are growing between those who were already homeless and the newly homeless, as each group reaches for the other’s resources.

Local providers of shelter and aid are bracing for an influx of new people in need, putting even more pressure on the shelter system and forcing difficult decisions about who should get priority for limited space.

Butte County alone already had about 2,000 homeless before the Camp Fire, with less than half of them making use of the county’s emergency shelters and transitional housing, according to a report by the Butte Countywide Homeless Continuum of Care. Many more choose instead to live on the streets or in tents.

Advocates say that in most cases, the goal of the shelters is to get people into temporary housing, support them on a path to self-sufficiency and eventually get them settled in a permanent home. Along the way, there are fundamental issues to address, like mental illness, addiction and lack of income. But one of the biggest barriers to ending homelessness in Butte County is a dire shortage of available, affordable rental housing.

The death toll from the fire stands at 88, with the number of missing at 25 as of Sunday, according to the Butte County Sheriff Department. Before the Camp Fire, the county had a housing vacancy rate of just 1 to 2 percent, much lower than the 2 to 5 percent needed in most healthy housing markets, according to Jennifer Griggs, the Continuum of Care coordinator. After the fire, “not only did all of that vacancy rate get swooped up right away, but now it’s even more of a challenge to find any type of housing for anybody, regardless of their housing status prior,” she said.

James Brown, 50, who lived in Magalia before his trailer was incinerated and has been sleeping since then in his car in the Walmart parking lot in Chico, said he would definitely move into a homeless shelter if he could find one with space.

“Where is all the housing?” he said as he walked through the tent city outside the store, where the displaced and the homeless are camped side by side in an open field. “The housing sucks. I mean, for a disaster area? It sucks. These people need housing, and tents are not good enough in this weather. They really ain’t.”

The Esplanade House, part of the Community Action Agency of Butte County in Chico, offers transitional housing for homeless families with children. On Sunday, roughly 150 of its 200 spots were taken, after two evacuee families arrived last week, according to Tom Tenorio, the agency’s chief executive. He said he expected the remaining spaces to be filled within a week.

As he and his staff consider applicants — some of them evacuees, others previously homeless — they bear the weight of having to choose some and turn others away.

“It’s heart-wrenching, because you know the people sitting across from you really, really need to be able to be housed,” Tenorio said. “I’ve had my staff in tears; it’s a tough thing on our end.”

But, he added, “it’s trying to preserve the initial purpose and mission of this house: to provide supportive services to homeless families. That’s why we’re not going to give any empty units to single people.”

In that case, Roslyn Roberts, part of the older population disproportionately affected by the disaster, wouldn’t qualify.

“I’m going to stay here in Chico and just become one of Chico’s homeless people until I can get back up the hill,” said Roberts, 73, who lost her home in Paradise and had been staying with her dog, Princess, at the Neighborhood Church shelter in Chico, an official Red Cross site that closed and moved farther away last week. “FEMA couldn’t seem to help me, the Red Cross couldn’t seem to help me, I haven’t had one penny for relocation, I haven’t been approached that there’s a room in town — other people have, but I’ve received nothing, and we don’t have anywhere to go.” Sites like the Walmart lot, where many self-described “burnouts” — those who lost their homes to the Camp Fire — have taken refuge, pose considerable dangers. Several volunteers said they had seen people who were displaced by the fires become targets for theft by those who were already homeless.

“They’ve been through the good, the bad and the ugly here,” said Rich Wilson, 68, a volunteer outside Walmart.

James Tyler Steen, 49, who had been homeless in Paradise for five years and has been living on the grass outside Walmart since the fire, said there is “a big difference” between the original homeless population and more recent additions.

“You’ve got the parking lot, and then you’ve got the field,” he said, referring to the division of space outside the shop. “Money is the difference. Their needs are met; these needs aren’t. These guys take their needs, these guys buy their needs.”

Brown acknowledged that there were tensions, but he added that in the midst of it all, there was also some camaraderie and a shared sympathy for the desperation of the situation.

“The homeless here are actually teaching the people who have never been homeless how to survive,” he said, like how to stay safe in the tents, where to find food, and how to keep warm as flash floods bore down from the recent rains. “And that’s a big positive,” he said.