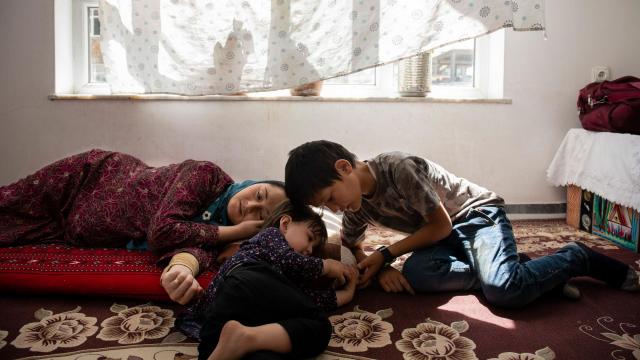 KABUL, Afghanistan — As evening takes over Kabul, daylight fading to gray, 3-year-old Benyamin senses that his father should be coming home from work about now.

But it’s been months since a bombing killed his “Aba,” Sabawoon Kakar, and eight other Afghan journalists. Benyamin cries and nags his mother, Mashal Sadat Kakar: Where is Aba? When is Aba coming home?

How do you explain death to a 3-year-old? Kakar, her baby, Sarfarz, in her arms, tries to distract him with toys. But when Benyamin keeps crying, she takes him to the balcony and points to the brightest star shining through Kabul’s polluted sky.

The war in Afghanistan is disproportionately killing young men, and it is leaving behind a generation defined by that loss. Children like Benyamin will have only early memories of their fathers, and the deaths will shape their lives even as true recollections fade. Babies like Sarfarz will have even less, with death taking fathers they will never know.

Carrying it all are the tens of thousands of widows the war has created since 2001. Like Kakar, they are left to raise families in a country with a dearth of economic opportunity and plagued by a war that kills 50 people a day.

And more, the women are made painfully aware that their society sees them as possessions. A new widow often must rely completely on her husband’s family, which is likely to demand that she marry the next available brother or cousin. The women usually have little say, though some try to resist.

Over months this year, as Afghanistan’s long war took an even deadlier turn, we followed several young women making the cruel transition to widowhood.

Overnight, their lives became a struggle that deprived them of even the chance to mourn. For a couple of them, including Kakar, their grief was punctuated by the pain of childbirth, bringing babies into a world consumed by despair. Reminders of their lost loves became their anchors in a newly unstable world.

Rahila Shams was also widowed — at age 22, six months pregnant with her second daughter. Her husband, Ali Dost Shams, a district governor, was killed in a Taliban raid in April. When her daughter was born, the family named her Shamsia, after the father she will never meet.

“I lost my love, my friend, and the father of my two daughters. Everyone says, ‘Stay strong,’ but no one says how,” Shams said.

“I feel everything is finished. But I’m trying to stay strong because I promised him that I’d look after our daughters,” she said.

Each of the women said she had found love in marriage, even if it took time in a culture where arranged matches remain the rule.

Rahila was in the ninth grade in Malistan District, southwest of Kabul, when Ali Shams, a distant relative, saw her at a wedding and sent his family to ask for her hand. She was half his age but found him handsome, she said, and he had been well on track for a government career.

“There wasn’t any beauty salon in our village,” Shams recalled. “It was a simple wedding party — I think about 1,000 people — simple and lovely.”

The couple moved to Kabul, where she enrolled in nursing school. Ali Shams became a district governor in Ghazni province and was away from home for long periods. They had their first child, Sofia, four years into the marriage, which quickly was forged into a partnership. But Shams now cannot help feeling that much of it was preparing her for the inevitability of a life on her own.

For Sabawoon and Mashal Kakar, their marriage was a love match from the start.

The two met while taking evening law classes. Both were young professionals with day jobs: Mashal worked for an aid organization, and Sabawoon as a radio journalist. Sabawoon had moved to Kabul from Helmand province, the battlefield area where his family still lives. Their relationship blossomed over a year spent chatting on the phone and sneaking out of their offices for quiet lunch dates.

After their families made their engagement official, the couple combined their savings — she was making more than he was — to buy an apartment. They decorated it piece by piece before they married.

“We invited only 300 people to the wedding,” she said. “It was enough for both of us. He was a good man and loved me a lot, and I love him, too — forever and for the rest of my life.”

Their son Benyamin added joy to the fulfilling life they were building together.

Kakar was at her desk at work the morning of April 30 when she got a message alerting her to an explosion in the Shashdarak neighborhood, where Ali Kakar’s office was.

Eight months pregnant, she arrived at the hospital and searched room to room until she found him on the second floor.

Sabawoon told her he had a hole in his back and might not make it, but as he was wheeled away for surgery, she thought he would. She sat down, exhausted, falling asleep as she plotted all the nutritious foods she would cook to help him recover.

She was woken up and told that Sabawoon had died. “Everything turned dark, like night,” Kakar said. For the Shams family, tragedy pierced the joy of Ali Shams’ expected return. The night before he was killed this past spring, he called his wife and their daughter, Sofia, and promised he would be home in a day or two. Sofia could not contain her excitement, jumping and chanting: “My Atai is coming! My Atai is coming!”

Taliban fighters stormed his office the next day and shot their way in. Ali Shams had told his staff they should flee if they could, but no one left. All were killed.

His body was transported back to Kabul. “They just showed me his face, like a photo in a frame,” Shams said.

In the months after their husbands were killed, the young widows were not only grappling with grief and their children’s confusion, but also dreading the inevitability of being passed along within their husbands’ families.

Kakar’s in-laws called her and asked her to join them in Helmand — for a break, they said. She politely turned them down. They grew more blunt, she said, arguing it was not good for a young woman and her two children to be in Kabul on their own.

“I told them I’m an educated woman and I can handle my life,” Kakar said.

She went back to work. But all along she had an eye on an exit. The everyday vulnerability of being a young, single woman in Afghanistan furthered her resolve to leave the country.

She started receiving unwanted messages from male friends and colleagues and felt like prey when taking care of paperwork alone in government offices. Yet asking male friends or family members for help would puncture the image of strength she was clinging to.

As months passed, Benyamin stopped asking when his father would come home. But at dusk he still grows restless.

“After Sabawoon’s loss, I was numb, but my heart was burning,” Kakar said. “I would ask other women who had lost their husbands whether the pain eases with time, and they would say, ‘No, it does not.'”

For other women, the prospects are grim, their choices and say in shaping their futures much more limited. Without a job, and still trying to complete her education, Shams is bound to her husband’s family. He had been earning about $900 a month as a district governor. The family is entitled some post-death benefits, but Shams doesn’t know the amount, as her husband’s oldest brother collects the money. She said she was uncomfortable about asking because she and her children live at his house now.

She feels an implicit expectation that she should marry Ali Shams’ younger brother, though the topic has not been openly discussed. The brother-in-law is a more frequent presence in their lives and has grown more possessive, she said.

“I am afraid to get remarried,” Shams said just days before giving birth to Shamsia.

Shams and her husband had known their second child would also be a girl, but she kept wishing the baby could somehow be a boy to take care of her and Sofia.

“If my child is a son, he could save my life,” she said during one visit to the gynecologist.

The doctor attempted to console her by telling a story of her own cousin who was killed in the west of the country just months earlier.

“You are not alone,” she told Shams. “There are many women like you in Afghanistan.” In the hours after her healthy daughter was born, Shams broke down.

“I was in pain, but the loneliness of it was much stronger,” she said. “I cried a lot — for being a woman, for being a widow at 22, for being the mother of two girls. I thought about the future, about Shams, about loneliness.”

She added, “I think loneliness is the strongest pain in the world.”

For Sofia, her firstborn, the baby sister was a welcome distraction. But the older girl still struggled. Every time the phone rang, Sofia would think her father was on the line. She would cry and wanted to talk.

More recently, Sofia has stopped asking about him. She hates the phone, and she has started referring to her uncle as father.

But the reminders of Ali Shams will always be there, in the framed photos on the wall, in the visits to his grave, her hand in her mother’s hand. And in something more personal, her birthday: On April 12, the day her father was killed, Sofia turned 3 years old.

Rahila Shams recently felt a glimmer of hope. A relative told her he could help her find a job as a vaccinator, a small step toward breaking the shackles of dependence and shaping her own future.

Days later, the relative was killed in a suicide bombing outside a demonstration in Kabul.

“I just want to leave this country and go somewhere peaceful,” she said. “Somewhere where no one is killed and no one loses their life.”