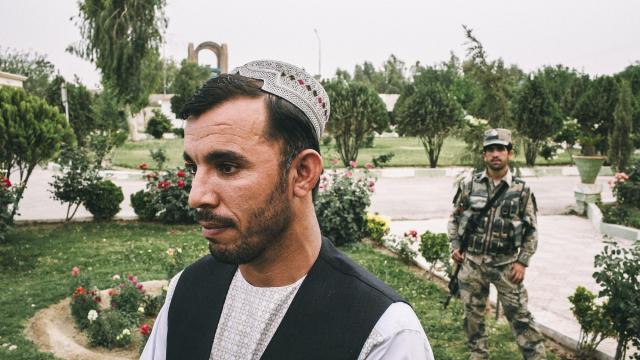 KANDAHAR, Afghanistan — One of the most devastating Taliban assassination strikes of the long Afghan war on Thursday killed a regional police chief with a larger-than-life reputation as one of the last stalwarts against the militants. The top American commander in Afghanistan narrowly escaped injury.

In what appeared to be an insider attack, at least one gunman killed the police chief, as well as the provincial intelligence chief. The governor of Kandahar and another senior police commander were also targeted; reports about their fate were conflicting.

The police chief, Gen. Abdul Raziq, had survived dozens of attempts on his life and was widely considered an indispensable U.S. ally with influence across critical areas of southern Afghanistan, in the Taliban heartland. A fierce commander, he pacified Kandahar province, once one of the most troubled spots of the war, and then held it secure for years even as the Taliban gained large swathes of territory all around it.

Raziq, 39, was a survivor in a region where few have managed to evade insurgent campaigns to kill influential leaders. Often accused of having committed torture, extrajudicial killings and other serious human rights abuses, the general nevertheless was a major presence in the national psyche of a country battered and demoralized by the Taliban. His killing was bound to affect the voting not only in Kandahar, but also in wider parts of the country.

“This killing is the most significant military victory for the Taliban in recent memory,” said Graeme Smith, a consultant with the International Crisis Group who spent years as a reporter in Kandahar. “The insurgents’ main enemy has now disappeared in the southern heartland where the Taliban movement was born.”

Raziq’s death will also complicate the mission of U.S. forces in Afghanistan.

The U.S. military now stands to lose a diverse network of informants capable of monitoring threats and infiltrations from the Taliban and other groups, a U.S. military official said. Raziq acted as a central point of contact who helped the West contend with a region awash in different ethnic and family factions. If a capable successor does not emerge, the official said, the Americans may have to deal with exponentially more power brokers in the south.

He said that Raziq had also been integral to shoring up the local police forces, and that without him, U.S. forces may have to pour more resources into that effort.

The attack took place Thursday afternoon after a meeting between Afghan and American officials at the governor’s compound.

“At 3:30 p.m., after a meeting about the security of elections, when the high-ranking participants were heading to helicopters, an enemy infiltrator opened fire on them,” the deputy interior minister, Gen. Akhtar Mohammad Ibrahimi, said at a news conference. “The police chief, Gen. Raziq, and the provincial intelligence chief, Gen. Abdul Momin, were killed.”

In a statement, the Taliban claimed responsibility for the attack, saying it had been aimed at Raziq and Gen. Austin S. Miller, the top American commander in the country.

The U.S. military released a statement saying that Miller had not been hurt, but that three Americans had been injured. A U.S. official, without offering details, said Raziq had been a target, but not Miller.

Eyewitnesses said the shooting took place as Raziq was walking the U.S. delegation to its helicopters. They said that a member of the governor’s compound guard had opened fire on Raziq and that a shootout involving Afghan and American security personnel had ensued.

The eyewitnesses said Raziq had been hit four times — twice in the leg, once in the abdomen and once in the chest.

“Today, I lost a great friend, Lt. General Raziq,” Miller said on Twitter. “We had served together for many years. Afghanistan lost a patriot, my condolences to the people of Afghanistan. The good he did for Afghanistan and the Afghan people cannot be undone.”

Raziq was the third of the last four Kandahar police chiefs to be killed on the job.

Smith said he had brought a measure of calm to a city that was experiencing daily explosions when he took command of the province’s police force in 2011. But his methods, he said, often involved “a savage campaign” against the Taliban, tactics that were celebrated in the city but terrified people in the countryside.

Raziq was 17 when he picked up a gun, and for years he was known to boast about Taliban body counts. But he mellowed in recent years, the war visibly changing him.

“I was a young man and then thought it was a good thing,” Raziq said in an interview in 2015. “But I have come to despise it. I have come to realize this can’t be done through death and blood.”

Initially, there were conflicting reports about whether the Kandahar governor, Zalmai Wesa, and Gen. Nabi Elham, a police commander responsible for several provinces, had survived the attack. Ibrahimi said both “are wounded but are under medical operation,” but other officials, including one of Wesa’s deputies, Agha Lalay Datagiri, said the governor had been killed. Other officials said the police commander had been injured.

In a brief televised message, President Ashraf Ghani said he had dispatched his intelligence chief and other senior officials to Kandahar to investigate the shootings. “I promise the Afghan people that soon the situation will get normal in Kandahar,” Ghani said.

The loss of Raziq casts a further shadow on a political season already marred by bloodshed. One-third of polling stations will not open because of security concerns, and at least 10 candidates and dozens of their supporters have been killed. The Taliban have threatened to attack polling places. Now, the attack in Kandahar has diverted the attention of the country’s security leadership to the province at a time when it is needed nationwide for the election. Last year, another major attack inside the Kandahar governor’s office took a heavy toll on officials, killing a deputy governor, the ambassador of the United Arab Emirates and members of parliament. The governor at the time survived with burns and wounds. Raziq had just stepped out of the room before the attack.

Raziq’s rise from lowly border guard to one of the most important U.S. allies and Afghan security leaders was a story only possible in the context of the Afghan war.

He had basic literacy, and as a teenager he made money doing small trades at a border crossing with Pakistan. His friends said he had picked up arms as a 17-year-old under the command of his uncle, an anti-Taliban leader, and was hardened by a sense of revenge after a large number of his family members were lost in the fight against the Taliban.

After the U.S. invasion, he became a border guard and rose through the ranks as a skilled, if ruthless, leader. When the former police chief of Kandahar was assassinated by the Taliban in an explosion in 2011, Raziq was appointed the provincial police chief with the immediate task of securing a city under siege.

In the initial days, Raziq relied on a tight group of loyal border guards to reverse the Taliban’s gains, his often dirty and disheveled men roaming the center of the city providing an odd sight for residents. Over the next few years, Raziq not only established himself as one of Afghanistan’s most important security leaders, but also grew as a major politician and power broker.

In recent years, he rarely wore his uniform and cared little about the chain of command. He frequently criticized Ghani, the Afghan president, and did not mince his words. Ghani repeatedly considered firing the general for insubordination and the possibility of corruption, but was advised against dismissing him by his U.S. allies and his own officials. They feared firing the general would bring additional instability in the south.

With the province and a major border crossing under his control, and with businesses abroad, Raziq grew enormously rich. He spent time in Dubai and had been heavily involved in the horse-trading that is part of the coalition-building ahead of Afghanistan’s presidential elections next year. Because of his influence and his wealth, he was seen as an important man to be won over — and someone who could deliver the south.

Some of Afghanistan’s highest-profile assassinations have come at times when peace efforts were underway. In 2011, Burhanuddin Rabbani, a former Afghan president who led a group seeking negotiations with the Taliban, was killed by an assassin who carried explosives in his turban.

Raziq’s death comes at a time when U.S. officials are meeting with the Taliban to push for formal peace talks. The general was believed to have been crucial to making sure the stalemate in the battlefield, particularly in the fragile south, did not tilt in Taliban’s favor before a negotiated settlement.

Although Raziq’s views on the Taliban may have changed in recent years, he still considered the group as a proxy fully at the mercy of Pakistan.

“If my death translates to peace, I have no problem with it,” he said in the 2015 interview. “What I fear is it won’t lead to peace. It is an illusion for the Taliban to sit down for talks. They have no control on that.”