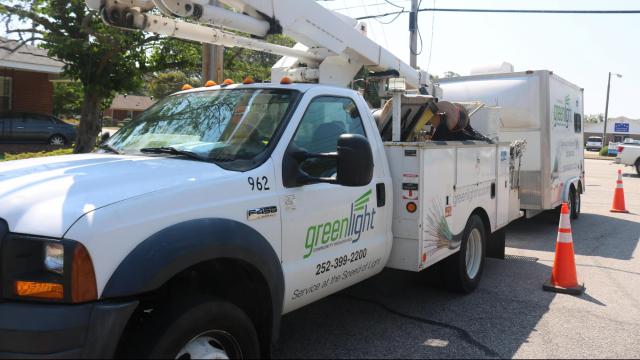 Pam Redding was born and raised in Wilson and left only for a short period to attend North Carolina State University before returning home and settling down. Married to another Wilsonian, she said she wanted to raise her family in the place she grew up.

"We have family here and the hometown atmosphere in Wilson is great," said Redding. "We also wanted to be able to take care of our aging parents and work here. We have enjoyed living here and it's been wonderful to raise our children here."

In addition to the small-town charm of Wilson, Redding noted the school system, local athletics programming, city amenities like Wilson's high-speed Greenlight gigabit internet, and the affordable cost of living as reasons why Wilson is an attractive place to live.

Her knowledge and love of the area comes in handy for her job as a real estate agent. A local RE/MAX realtor in Wilson, Redding has been helping people find houses and make Wilson their home for the past 19 years.

"It's a complete seller's market — houses sell here as soon as they hit the market," said Redding. "Existing and new construction don't last long here at all."

This is evidence of Wilson's growth over the last few years. According to the most recent census data, Wilson is growing at a rate of 0.09 percent annually. This steady, but manageable growth, allows the city to adapt and expand strategically to residents' needs. Additionally, the controllable growth encourages a stable housing market that isn't inflated due to a surplus of demand and inadequate supply.

Redding said builders see the value in Wilson's available land and the housing options are a lot more affordable at price per square foot compared to other areas like Raleigh and Durham, all while having a close proximity to Wake County — without the congestion or traffic.

Nationally renowned builders like D.R. Horton, a home builder that "believes in a vision of homeownership for everyone and a home for every stage in life", understands Wilson's unique value proposition. D.R. Horton sells single-family homes in an array of price ranges and floor plans.

"We believe there is solid buyer demand in this market, in addition to [Wilson being] a municipality focused on growth," said Zach Anderson, land acquisition manager for D.R. Horton - Central Carolina.

Anderson also noted the appeal of Wilson's Greenlight high-speed gigabit internet to both land developers and potential residents alike, especially during a time where many people are homebound and planning to work from home for the foreseeable future.

"We believe the City of Wilson and Greenlight go hand-in-hand. Having built homes in Wilson before, we have direct knowledge that it's a great selling point. We expect broadband as a bare minimum for our communities, but the gigabit service from Greenlight is extremely appealing to buyers, especially in smaller markets. This infrastructure can make an otherwise distant and rural neighborhood accessible to more workers in other markets," added Anderson. "We believe the ability for more people to work remotely may allow us to increase our geographic footprint to even more smaller markets than those we already operate in."

In addition to D.R. Horton homes, new subdivisions like Walkers Trace by Capitol City Homes in Wilson offer home buyers single-family homes in the $200,000 range that are bright, modern and stylish. However, if you're looking for existing construction — there's plenty of that too. Redding also mentioned she's also heard murmurs of a new community of potential townhomes being built soon.

And while houses may sell quickly in the area as Redding highlighted, it doesn't mean you can't find what you want or a home won't be affordable. Just like any other market, there is an array of housing options in Wilson from townhomes to large estates, but Redding said the most popular price points tend to hover around $215,000.

"You can get a 3,000-square-foot home here in the $300,000 to $350,000 price range in a very nice, well established neighborhood with a two-car garage," said Redding. "You essentially get more bang for your buck here compared to Wake County."

As a young girl, Redding didn't necessarily see herself staying so close to home, but now, it's hard for her picture herself living anywhere else. With amenities galore, small town charm, proximity to downtown Raleigh, and an affordable cost of living — living in Wilson is hard to beat.

"Our town has so much to offer — from the affordability of housing, to the great doctors, to the schools and great restaurants," said Redding. "Our community sticks together. My family loves calling Wilson home."