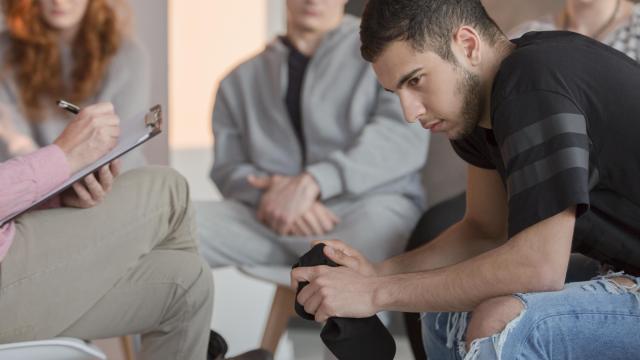 This article was written for our sponsor, KidsPeace.

For many young adults, turning 18 is a milestone birthday to look forward to. It's a time when young people fly the nest and eagerly head toward independence, whether they're applying to college or gearing up for their first full-time job.

However, foster kids who are about to "age out of the system" often see this milestone birthday as an unnerving time of unknowns and unpredictables.

"When I had that big birthday at 18, I could go out and live on my own and try it. But if I failed, I had somewhere to go back to. That's the difference for a foster kid who is aging out of the system," said Danica Manning. Manning is a therapeutic foster parent with KidsPeace, a private charity organization that serves the behavioral and mental health needs of children, families and communities.

Roughly 20,000 youth age out of foster care each year without familial support or family connections. Within 18 months of emancipation, it's estimated around half of these youth become homeless. Additionally, the National Law Center on Homelessness & Poverty estimates 5,000 unaccompanied youth die each year as a result of suicide, assault or illness.

A scholarly article published in the Children and Youth Services Review journal stated, "When foster youth turn 18 — or, in some states, 21 — they lose access to the financial, educational and social supports provided through the child welfare system. These youth fare poorly compared to their peers across young adult domains, including mental health problems, substance abuse and underemployment."

In Manning's opinion, this is why adult foster care programs, like the one KidsPeace offers, are so important. This foster program, for young people ages 18 to 21, is intended to support young adults during a critical time in their development and is designed to help them achieve better outcomes.

Program participants get a monthly stipend and must maintain employment or be in school. KidsPeace workers check in on participants once every two weeks to make sure they're tracking toward their goals and to provide mental health support.

"They get a stipend each month and start learning how to budget and open up a checking account. It sounds like a no brainer, but when you have kids that haven't been taught these things — there's certain things that they don't know," said Manning, who is currently fostering an 18-year-old. She's assisting him with his independent living plan post high school and is helping him learn how to do things like plan meals for the week and grocery shop.

Manning's job as a licensed clinical social worker and her husband's work as a pastor helped prepare them for foster parenthood. Both had experience working with teens before becoming foster parents in 2018 and the couple wanted to continue working with this age group, knowing that adolescents are harder to place in homes.

"We have always had a passion for youth in foster care and have always wanted to help out. When it comes to adult foster care, the hardest group to place is teenagers," Manning said. "With my clinical background and my husband's pastoral background, we actually love working with teenagers. It's been a great fit for us and has worked out well."

Parenting a young adult can be tricky, but the Mannings have implemented different rules for their 18-year-old than they have for their younger children, and have made it clear this is his forever home on the condition that he be in school or working. The Mannings are consistently working with their foster son to "make sure that his life is moving in a positive direction and systematically giving him freedoms."

Jessica Tomlinson, who is also a KidsPeace therapeutic foster care parent, welcomed her foster son into her home when he was in the 11th grade.

After graduating high school, he entered into the adult foster care program and went to college, but found himself struggling there and instead transitioned into independent living. He now works full-time and coaches part-time with his former foster father, Tomlinson's husband, Ben, who he calls "dad."

"He's over here eating dinner every Sunday, checking on me and texting me," Tomlinson laughed.

In addition to their former foster son, who is still part of their family, the Tomlinsons have two biological children of their own, a former foster child who is now an adult but has mental health needs, and a goddaughter who they've taken into their home. Tomlinson said she was raised in the "it takes a village" generation and though she grew up an only child, her house was the one everyone was welcome in.

Later in life, both of her parents, now separated but still best friends, would each become foster parents and Tomlinson looks to their examples as inspiration. Her father-in-law and stepmother-in-law are also foster parents. Put simply, the Tomlinsons are embedded in the foster community. However, they have had their fair share of ups and downs throughout the years, and fostering an adult is a particular type of challenge all its own.

"Caring for young adults is totally different than caring for a child. I would say that roughly 80 percent of the kids who have left my home and exited out of the foster care system, of the ones I keep in contact with, 70 percent struggle with mental health, homelessness and budgeting," Tomlinson admitted.

Tomlinson mentioned that with teenagers or young adults, it can be more of a struggle for them to see you as an authoritative figure. When children are placed with foster parents in their later years of adolescence, building a foundation of trust is oftentimes harder compared to younger children, since they have usually experienced more transition. Compounding this is the fact that young adults are facing the fear of being out on their own for the first time.

"My foster son, when he turned 21, he was going through a crisis because he knew that his time [in the foster care program] was ending. He didn't feel like he was ready. His anxiety was heightened," Tomlinson said. "Personally, I feel like these programs should be extended until 25, because by then you're just getting them to experience life."

"When it comes to our young people in treatment in foster care, therapy is hopefully giving them what they need, but you can't go faster than where they are emotionally. You want to make sure that you're assigning responsibilities and freedoms that they can successfully master. Which is why that cut off of 21 is so unreasonable. They might be 21 physically, but be 15 emotionally," she said. "There's a problem that a number equals a certain level of maturity. This program gives these kids more time to get it right while having support in place that can protect them and keep them safe for a little longer."

Manning said she often gets complimented on "how she is providing" so much to her kids, but believes the reverse is true.

"It's absolutely a calling. Our kids have been able to teach us so much about life and love and the resiliency of the human spirit," she said. "Seeing them bounce back from hardship, watching them succeed at something that they thought they couldn't do, and witnessing that conversion from them calling you mister and missus to mom and dad. Watching them realize that there's hope for them and that they can live a normal, regular life. It's a sacrifice, it's not easy, but it's beautiful, inspiring and very fulfilling."

This article was written for our sponsor, KidsPeace​​​​​​​.