Durham, N.C. — Actors Kerry Washington and her husband, Nnamdi Asomugha, were in Durham on Saturday with a mission in mind to encourage people to vote early.

The two made several stops in the city, including polling places to encourage people to vote for Democratic presidential nominee Joe Biden. Washington said she was in Durham because the Tar Heel state will have a huge impact on the election.

During Saturday's stop, the duo held a rally encouraging voters to get to the polls early. Both actors later met with volunteers to pick up campaign items to distribute in the community. They also gathered alongside local business owners and local leaders to discuss bringing about change.

"Here in North Carolina, you're voting on senator, governor and president," Washington said. "You're also voting on local, state reps ... there's so many races and all of those people have an impact on the decision that impacts your life."

Erin Perrine, Director of Press Communications for President Trump, said celebrities like Washington are too out of touch to appeal to everyday people. 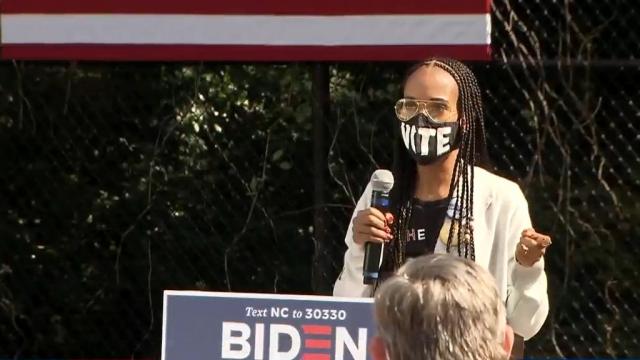 "North Carolina was a huge part of the victory in 2016, and it will be again in 2020," Perrine said. "It's part of our strategy in the campaign to protect the 2016 map and expand the opportunity."

Biden will be in Durham on Sunday. President Trump will be in Gastonia on Wednesday. Saturday evening, the Trump campaign announced Donald Trump Jr. would be in Arden, N.C. on Monday for a 2:30 p.m. rally. He'll also make a stop in Kernersville on Monday at 6 p.m.