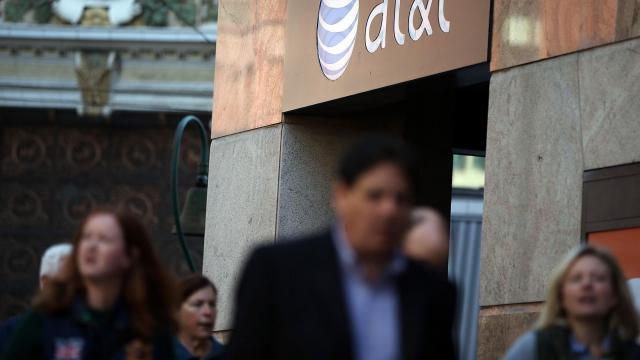 CNN — Ellliott Management, a top activist shareholder firm, disclosed Monday that it has taken a $3.2 billion stake in AT&T.

In a letter to AT&T's board, Elliott Management partner Jesse Cohn and associate portfolio manager Marc Steinberg wrote that AT&T's stock could potentially surge to above $60 a share by 2021 if the company "increased strategic focus, improved operational efficiency" and "enhanced leadership and oversight." That would be a more-than 65% increase from Friday's closing price of $36.25.

Shares of AT&T soared more than 5% in early trading to around $38 a share.

Elliott wants AT&T to sell many of its non-core businesses that are "distractions and should not be part of the portfolio," proposing AT&T discuss spinning off DirecTV, its Mexican wireless business, and several other operations.

"Any assets that do not have a clear, strategic rationale for being part of AT&T should be considered for divestment," Elliott said.

AT&T has purchased several large assets over the years, including its $85 billion purchase of Time Warner, which it completed last year after a lengthy court battle with the US Department of Justice.

"While it is too soon to tell whether AT&T can create value with Time Warner, we remain cautious on the benefits of this combination," the fund said in a letter. "AT&T has yet to articulate a clear strategic rationale for why AT&T needs to own Time Warner."

"We look forward to engaging with Elliott. Indeed, many of the actions outlined are ones we are already executing today," the company said in a statement. "AT&T's Board and management team firmly believe that the focused and successful execution of our strategy is the best path forward to create long-term value for shareholders.

President Trump, a frequent critic of CNN and other mainstream media outlets, applauded Elliott's decision to take an activist stake.

Trump said in two tweets that the Elliott stake was "great news," adding that perhaps Elliott "will now put a stop to all of the Fake News emanating from its non-credible 'anchors.'"

Elliott would not have any operational control over AT&T writ large, let alone WarnerMedia and CNN. It's also worth noting that Elliott's stake, while significant, makes it just the sixth-largest institutional owner in AT&T, at a little more than 1%.

Giant mutual fund firms Vanguard, BlackRock and State Street, which don't tend to take activist stakes, are the three largest owners of AT&T. They collectively hold more than 16% of AT&T's outstanding shares. Vanguard and State Street declined to comment on Elliott's plans. BlackRock did not immediately respond to a request for comment.

Elliott took issue with some aspects of how WarnerMedia has been run after the AT&T deal closed, saying that "there is still confusion over strategy and a growing sense that AT&T doesn't have a plan" — particularly with regards to the HBO cable network and streaming media. AT&T is set to release HBO Max, its streaming play, early next year.

Elliott also noted that WarnerMedia has "suffered from alarming executive turnover." But there was no specific mention of CNN whatsoever in Elliott's letter to AT&T.

Elliott also criticized AT&T for not focusing enough on its core wireless business. The activist said that it has lost ground in the marketplace to top rival Verizon as well as T-Mobile and Sprint, which are in the process of merging.

"Verizon took up the premium end of the market, Sprint targeted the low end and T-Mobile was the disruptive innovator. By contrast, AT&T was comparatively static, without clear brand positioning," Elliott said.

Adding insult to injury, Elliott argued that AT&T's failed attempt to buy T-Mobile in 2011 helped strengthen T-Mobile because AT&T wound up paying T-Mobile a break-up fee of $6 billion and made several other important agreements when it walked away from the merger.

"AT&T paid the largest break-up fee of all time and provided T-Mobile with a seven-year roaming deal and the invaluable spectrum it needed to develop from a then-struggling competitor into the thriving force it is today," Elliott said.

Elliott Management is run by billionaire investor Paul Singer, who famously battled Argentina over its mutlibillion dollar debt defaults. He won a more-than-a-decade-long legal battle with the South American nation in 2016, forcing Argentina to settle with its creditors.

Elliott also owns Italian soccer club AC Milan and it bought struggling bookstore chain Barnes & Noble in June for about $683 million. The fund also took a stake in eBay earlier this year and is calling for the company to sell off StubHub and other assets.