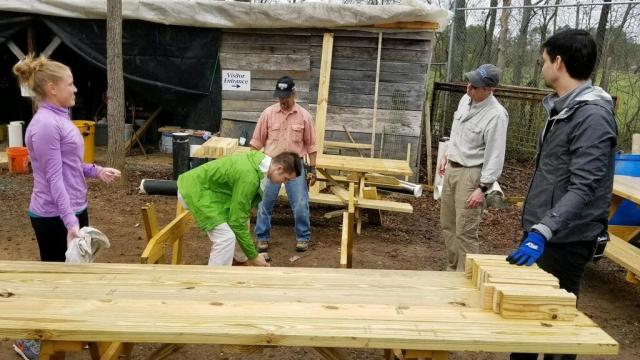 Bob Holton remembers the resident who withdrew after her husband’s decline. She didn't visit with friends, and her apartment became messy.

Then a new resident came to town and immediately started recruiting neighbors to help her make Linus blankets for children in the nearby hospital. Something about that project appealed to the widow, and she offered to help.

Later at the widow's 90th birthday party, she said making Linus blankets for sick children had "saved my life."

Holton noted that her apartment was in order. "She had a reason to live."

Holton is one of the many volunteers at Galloway Ridge at Fearrington, a Life Plan Community near Chapel Hill. He keeps a spreadsheet that captures the time that residents spend serving the greater community of Chatham County as part of the Volunteer Services Coordinating Committee.

Holton's spreadsheet shows that residents collectively performed 32,000 hours of community service last year. "And that doesn't include everybody," he said.

At least 10,000 hours were with organizations such as the Boys & Girls Clubs and the Chatham Literacy Council.

The rest were with Galloway Ridge projects, such as the Turnaround Shop. Residents donate items, and sales support the Employee Emergency Relief Fund and the Residents Benevolent Care Fund. Unsold items are donated to the Habitat for Humanity ReStore.

Holton's 35 years as a volunteer with the Boy Scouts was the basis for a lifetime of volunteering that shows no sign of slowing down.

The Holtons moved to North Carolina from Concord, Mass., in 1998. They moved to Galloway Ridge six years ago and immediately jumped on the many opportunities for engaging with the community for mental and physical stimulation.

"To sit in a rocking chair is a waste of both ends," he said. "We have wonderful people here. You can learn from them and from doing things together. Being a couch potato is a huge waste of time."

Most of Galloway Ridge’s residents seek out opportunities to engage with the community, according to Scott Richardson, senior director of resident and community engagement.

"They've been leaders in industry and education, and always strive for a greater purpose," he said. "That drive and purpose doesn't go away. It may slow down a little, but it doesn't go away."

On average, 15 to 16 local agencies share approximately $80,000 from the Charitable Fund per year.

One particular organization that has benefited from that generosity is the Chatham Habitat for Humanity, according to Anna Tuell, the organization's development director. The $100,000 pledge the residents made over five years will help pay for the water and sewer lines going into a new Habitat community, Robert’s Run in Pittsboro.

Galloway Ridge volunteers also help with running and donating to the ReStore.

"We have fun," Tuell said. She noted that resident Lee Cope, "ringleader of the Galloway group," has volunteered in the ReStore so frequently that she is essentially full-time staff.

Holton said it takes three years for most people to retire. "They have to deactivate," he said.

"Then they want to get involved and do things. We're always looking for people who want to live long and die short," Holton added. "Giving back to a community, it's one of those things -- the more you give, the more you get."

To live an engaged life, he said, is "empowering, rewarding and energizing."