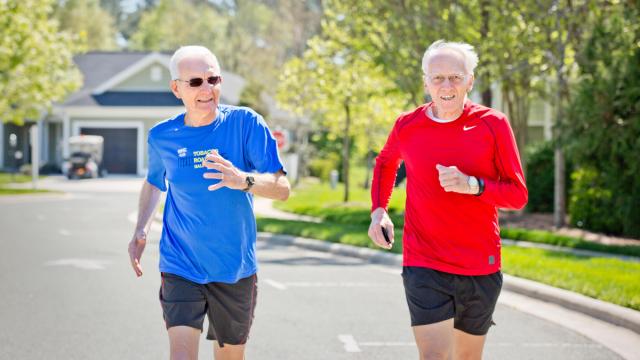 Becky Sbrollini's "warm and fuzzy" grown daughter would talk about having her parents live with her and her family someday when they got too old to live alone. But Sbrollini, 76, and her husband had other ideas.

They'd watched their parents and friends grow old and feeble and need help from their family, and they didn't want to put that responsibility on their children.

"I didn't want them to go through that," she said. So Sbrollini and her husband moved into Galloway Ridge at Fearrington, a Life Plan Community near Chapel Hill, where their needs will be taken care of, even if skilled nursing care is required someday.

When the Sbrollinis moved into Galloway Ridge, she sent her kids a note.

"Congratulations to you," it said. "Your parents have moved into this place, and you have nothing to worry about."

The move was "a present to our kids," Sbrollini said. Sure, the money could have been used for something else, but how can you put a price on peace of mind?

Dementia in the Family

Both of Bob Marshall's parents had dementia. He knew what he may face some day. He decided to make a change, rather than wait and risk putting those decisions on his family.

"As my oldest son put it, 'Dad, you're in great shape now, but the day is coming when we are not going to be eager to drive eight hours to change your diaper,' " Marshall recalled. "That boy has a way with words, and it hit home. It was time for a change."

So Marshall, 76, left Tennessee three years ago and moved to Galloway Ridge to be closer to his children and grandchildren living in the Triangle. Most days he exercises in the gym, hikes, gardens, attends lectures and leads discussion groups. But if the same fate that befell his parents hits him, he can stay right where he is for care.

Marshall explained that he and his sisters had to place their parents in a home when the time came, but he said he's glad he's already living at a place that will provide the care if he should need it in the future.

Marshall added, "What a gift to my children to be free of what I had to discern for my parents. A friend wisely observed that 'It's better to be 10 years early than five minutes late.' "

Marshall likes the financial structure. After paying an entry fee, the monthly fee remains the same no matter how much care a resident may need someday.

"You're not nickel-and-dimed for everything down the road," he said.

Maybe We Should Have Told the Kids

Looking back on their decision to move to Galloway Ridge, Flo Phillips, 80, thinks maybe they should have told their grown children sooner that the large house by the lake was becoming a burden and that they didn't like living 50 miles from their physician.

Instead, the Phillips decided to quietly look into Life Plan Communities. They took their time and eventually decided on Galloway Ridge.

On the last night of a week long family vacation at the beach five years ago, they told their kids their plan.

"Larry and I have always been very active, and our kids have always seen us that way," she said.

Across the table she watched her youngest son turn pale.

Was something wrong? Are you sick? She assured him they wanted to simplify their lives and be free to "do as we please."

Tears rolled down his cheeks. As a salesman of medical equipment such as wheelchairs and walkers, he had visited many nursing homes full of frail old people – the kind of places where he didn't want to see his active parents.

Only after visiting Galloway Ridge on his own and taking a tour did he begin to understand the difference between a nursing home and a Life Plan Community full of activity. When the time came, their son helped move in their furniture.

"It never dawned on me that we should have gotten them involved in the process of looking [at Life Plan Communities]," she said. But her son gets it now. He's talking about moving in himself.