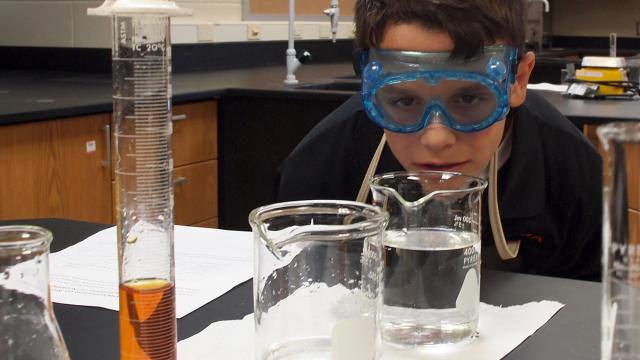 Parents have a number of motives for sending their children to a private school. What these motives are will determine where the parents begin to look for alternate schooling and where they ultimately apply.

When a local public school does not provide the level of academic rigor that would challenge a gifted or ambitious student, parents often begin to look for other options. Private schools offer a wide variety in the degree of academic difficulty they present. Some are meant more as remedial schools and others are intended to encourage excellence.

"Because of Hargrave, his GPA has risen, he got a full four-year scholarship to Alabama, plus an engineering scholarship on top of that," said Calyx Harris, whose son, Hayden Bressoud, graduated in 2017. "He found fraternity and camaraderie here at Hargrave; it's just been a fantastic experience."

Discipline and other character virtues

Schools may also focus on a certain set of values which are attractive to the family as they search for the right place for their child.

Children can have a difficult time finding ways to avoid time killers like social media and video games. A school environment that focuses on discipline can free the student from this and build integrity so they can choose to do the right thing themselves.

"The changes that have been made in Corey are dramatic. He's a different person. He's respectful, prompt, cares about what's going on, and cares about his future," said David Renaker, whose son, Core Renaker, graduated in 2016. "I can't say those were character traits he had before going to Hargrave. Hargrave made a tremendous difference in his life and ours."

A common concern about public schools is a lack of order and decorum on campus that can create a lack of safety for the students.

Many private schools offer students strict schedules, rules of decorum, uniforms and the expectation of disciplinary action. This all creates a sense of order that prevents the chaotic, and sometimes violent, environments seen at poorly-run public schools.

Even some private schools experience these problems when order is not maintained.

Preparation for college or career path

Parents who want to see their children enter college or a promising career path often rely on private schools to provide this preparation. Extra tutoring, study hours and smaller class sizes are all available at many schools.

"I believe God put me on the right path to be successful. If I hadn't gone to Hargrave, I’d have had a much harder time adjusting to life at Clemson in my freshman year," said Shaq Lawson, 2012 postgraduate and 2016 first round NFL Draft Selection. "Going to Hargrave changed the way I carry myself. It made me more accountable, more responsible, more of a man."

Options for where to apply

There are many types of private schools that parents can apply to. If they decide that a single-sex, academically rigorous, structured environment with an eye towards the student's post-graduation success is the right path, a military school could be the right fit.

Applying for a military school can be a competitive process, but it generally begins by contacting the admissions office at the school and asking what steps need to be taken.