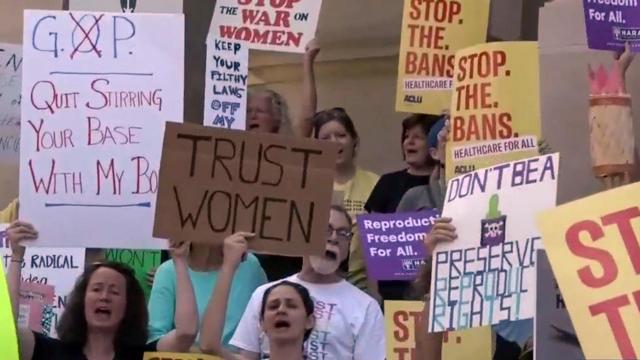 “Our patients deserve to access abortion without having to jump through the many hoops state legislators have implemented,” Kelly Flynn, president and chief executive of the A Woman’s Choice clinics, said in a news release announcing the suit.

“These restrictions force our patients to travel long distances and delay their care, and they force us, the providers, to give them medically unnecessary, biased information about abortion," Flynn said.

The suit names House Speaker Tim Moore and Senate President Pro Tem Phil Berger, the top Republican leaders in the state's Republican-majority General Assembly. It also names the state's attorney general and a number of local district attorneys, who have the authority to prosecute violations of state restrictions.

Moore spokesman Joseph Kyzer said in an email that legislative leaders "will vigorously defend" the state's abortion laws "against another attempt by the radical left to use the courts to overcome voters’ rejection of their fringe agenda."

Berger spokeswoman Lauren Horsch said the laws targeted "are intended to protect the health and safety of women and have been on the books for years."

The lawsuit targets a number of state laws, including:

In announcing the lawsuit Thursday morning, the groups noted U.S. Sen. Thom Tillis' role in passing 2013 abortion restrictions as speaker of the North Carolina House and made a passing reference to the "McCrory-Forest administration," thus naming the two most prominent North Carolina Republicans on the ballot this November: Tillis and Lt. Gov. Dan Forest, who's running for governor.

The groups said abortion access is limited in North Carolina "as a result of decades of political attacks that reached a fever pitch under former Governor Pat McCrory" and that barriers Republicans erected "serve no medical purpose."

In 2017 in North Carolina, the state recorded 22,677 induced abortions, according to Department of Health and Human Services statistics. That's compared to 121,000 live births in the state that year.