A woman read 'The Secret Garden' as a child, then gave it away. She just found her old book in a museum 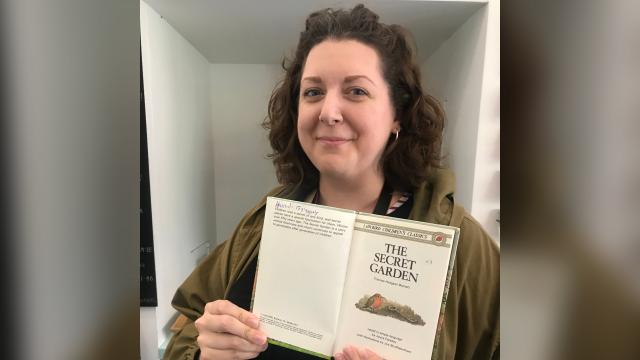 CNN — Like many British children, Zoe Andrews and her sister Hannah loved "The Secret Garden," the 1911 classic novel by Frances Hodgson Burnett.

In the inside cover of the Ladybird Children's Classics edition, they even wrote Hannah's name in hieroglyphics.

Andrews grew up, and eventually donated the beloved children's book to a local Oxfam charity shop.

She found it again, decades later, in a museum in Reading, England.

Andrews, who's now 35, said the book felt like her copy, when she picked it up, so she flipped through it until she found her handwriting.

"I stood there dumbfounded," she said.

She texted her mother to tell her about her find.

"I thought 'well, I have to buy it, it's meant to be,'" Andrews told CNN in an email. "I went to the counter to purchase it and I told the lady that this was my book from when I was little, and she kindly informed me that she was the person who had picked it up at a charity shop in Wallingford."

The discovery happened last week, as Andrews was flipping through the pages of second-hand books at the Museum of English Rural Life shop.

"It's not every day that you pick up a book, open it, and, in the inside cover, find your sister's name, in hieroglyphics ... the ones you wrote when you were kids," the MERL's digital editor Joe Vaughan sad in a Twitter thread recounting the incredible discovery.

The unusual purchase "was only a quid (one pound)", Andrews said.

The book was purchased from a charity shop in Wallingford before making it to the store for reselling.

"It's a very bizarre feeling to find something you loved as a child and to think of its journey. How many other children owned and read that book?" Andrews said.

Danielle Eade, who works at the museum, said in a statement to CNN: "I was standing in the shop near Zoe as she was buying the book, and she almost didn't tell us the story behind it!

"When she did, I couldn't let her leave without finding out more and asking her for a photo. It was such a lovely and heart-warming tale."

Kate Arnold-Forster, director at the MERL, added: "One of the most unexpected yet fascinating aspects of libraries is discovering books that bear traces of their readers' lives, moving us to speculate about how they were read and enjoyed.

"That it's The Secret Garden -- a novel that's survived generations and provided a magical escape for so many readers -- makes this story all the more wonderful."

Andrews said she was home from work because she's been unwell and had taken a short walk. "After three weeks of feeling very under the weather, it was a perfect pick me up," she said. "And now, it is back on my book shelf, where it will stay."