A Veteran Had a Yard Sale to Pay for His Own Funeral. Two Men Helped Him Raise $58,000. 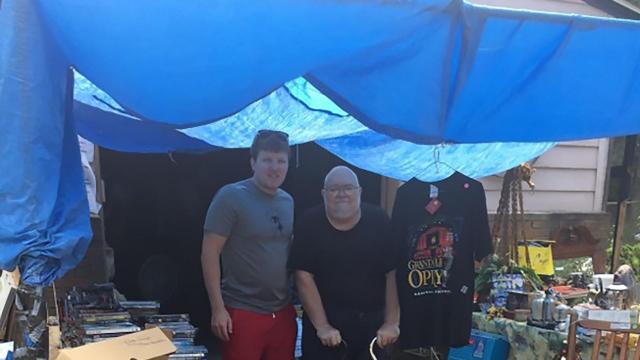 When two men visited a yard sale in Western Pennsylvania last month, they browsed under the shelter of a blue tarp through the typical wares: dishes and vases, books and DVDs, old paintings and used clothes.

They spent about $10 between them. One of the men, David Dunkleberger, 27, picked up a carton of glass bottles and some newspapers from the summer of 1977, when heavy rains brought catastrophic flooding to the area. The other man, Ed Sheets, 27, bought a railroad stock certificate.

They also spent time talking with the man selling the items, Willie Davis, a Navy veteran who explained that he was trying to raise money for a funeral.

“I said, ‘Whose funeral?’ And he said, ‘Mine,'” Dunkleberger recalled Saturday. “I can only imagine my face when he said that to me.”

Davis, 66, had received a diagnosis of terminal cancer and was trying to get rid of his possessions. He figured it would cost thousands of dollars to pay for a funeral and a burial in Culpeper, Virginia, next to his parents.

After Dunkleberger and Sheets left the yard sale in Johnstown, Pennsylvania, they could not stop thinking about Davis’ final wishes. “To me it was such a heartbreaking story,” Sheets said. “And the fact that he didn’t want to be a burden to anybody else — I just found that incredible.”

The next day, the men set up a fundraising account to help cover the funeral costs. For about a month, they relied on friends and relatives to spread the word, collecting about $475.

But when a local news outlet, WTAJ, covered the story Monday, things really began to pick up steam. Donations began pouring in from across Pennsylvania, and then from across the country.

Davis, who has squamous cell carcinoma, a form of skin cancer, learned of his terminal diagnosis this year. He said he did not want to know exactly how long he has to live because getting his affairs in order has been hard enough.

He described the wrenching process of finding owners for his three dogs, his constant disappointment with the health care system for veterans, the odd feeling of deciding which of his treasured possessions should be put out for sale, and the nagging worry that his sisters might be saddled with funeral costs after he died.

That last worry, at least, has been eased by the fundraiser’s success.

“I was trying to do it all on my own,” he said. “Then two wonderful people came through and decided they were going to help me.”

Because the donations should more than cover the cost of his funeral arrangements, Davis said he was working to start a foundation that could help pay for the funeral or burial costs of other veterans.

That goal, he said, has helped him to deal with his terminal diagnosis. “I’m dying,” he said. “So I was seeking something that would give me more purpose.”