200 hospitals have been at full capacity, and 1/3 of all US hospitals are almost out of ICU space 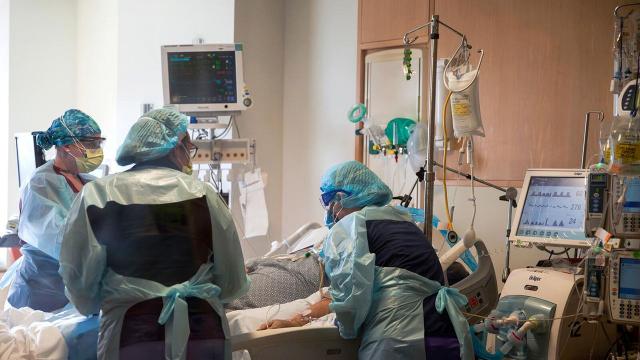 CNN — More Americans who don't even have coronavirus are suffering from soaring Covid-19 hospitalizations.

Newly released data from the US Department of Health and Human Services show at least 200 hospitals were at full capacity last week.

And in one third of all US hospitals, more than 90% of all ICU beds were occupied. Coronavirus patients occupied 46% of all staffed ICU beds -- up from 37% in the first week of November.

Doctors say the numbers will keep getting worse, as the predicted post-Thanksgiving surge has led to widespread infections and record-setting hospitalizations and deaths.

"What we have seen over the last few weeks is a sharp rise in infections. And what we know -- from the beginning of this pandemic -- is infections are followed by hospitalizations, which are then followed by death."

Across the country, more hospitals are running out of health care workers or ICU beds, forcing some doctors to send patients out of state.

"The impact is not just on people with Covid. It's an impact on anybody who needs hospital care," Jha said.

"The hospitals are running out of beds for everybody. So it's a much broader public health problem than just a Covid problem."

A day of extreme hope and despair

Thursday should have been a day of great hope, as a Covid-19 vaccine could get authorized for emergency use very soon.

But it's also a day of devastating loss. The single-day death toll from Covid-19 reached a record high of 3,124 Wednesday, according to Johns Hopkins University.

That's more deaths than those suffered in the 9/11 attacks. And experts say the death toll will get worse.

A new composite forecast from the US Centers for Disease Control and Prevention projects a total of 332,000 to 362,000 Covid-19 deaths by January 2. That forecast combines modeling from 40 independent research groups.

Covid-19 hospitalizations also reached a new record high of 106,688 on Wednesday, according to the COVID Tracking Project.

And more than 221,000 new infections were reported on Wednesday alone -- inevitably leading to even more hospitalizations and deaths.

"We are in a totally unprecedented health crisis in this country," former Health and Human Services Secretary Kathleen Sebelius said.

The 'light at the end' of a very long tunnel

Vaccine advisers for the US Food and Drug Administration met Thursday to discuss the Pfizer/BioNTech vaccine, which has shown high rates of efficacy in a clinical trial.

If the FDA grants emergency use authorization in the coming days, the first Americans outside of clinical trials could start getting inoculated this month.

These are the criteria that the FDA will use to determine whether to grant emergency use authorization, according to Dr. Doran Fink, deputy director of the FDA's Division of Vaccines:

-- The authorization must address an agent that causes life threatening disease or conditions.

-- There must be reason to believe the medical product may be effective to prevent, diagnose or treat that disease or condition.

-- The benefits of the product must outweigh the risks.

-- There should be no other adequate product already approved and available for diagnosing, preventing or treating the disease or condition.

Officials will meet again later this month to evaluate the Moderna vaccine, which has also shown to be highly effective in a clinical trial.

Covid-19 vaccines are a "really significant light at the end of the tunnel," Sebelius said.

But the US probably won't see any significant impact from vaccines until well into 2021 -- and that's only if enough people choose to get vaccinated, said Dr. Anthony Fauci, director of the National Institute for Allergy and Infectious Diseases.

"Let's say we get 75%, 80% of the population vaccinated. I believe if we do it efficiently enough over the second quarter of 2021, by the time we get to the end of the summer ... we may actually have enough herd immunity protecting our society that as we get to the end of 2021, we could approach ... some degree of normality that is close to where we were before," Fauci said at a Harvard T.H. Chan School of Public Health virtual event Wednesday.

But with many more infections and deaths expected before widespread vaccinations, personal responsibility is key to getting through this winter.

That means wearing face masks and hunkering down in your Covid-19 social bubbles.

"We've got to take what we've learned in the last eight months and really put it into practice so we don't continue to have this unthinkable death toll and disease toll," Sebelius said.

State and local leaders from both parties are doubling down on safety mandates as coronavirus runs amok across the country.

"Baltimore City has not had to implement such severe restrictions since the very earliest days of the pandemic and the implementation of the stay-at-home order," the city's health department tweeted.

"Unfortunately, with the volume of new cases that we are seeing and the implications it has on hospital utilization, during a period of widespread, community transmission, activities such as eating, drinking and smoking in close proximity to others, should not continue."

In Mississippi, Republican Gov. Tate Reeves signed a new executive order adding stricter limitations on indoor and outdoor gatherings and moving more counties to the state's mask mandate list -- meaning 61 of the state's 82 counties are under a mask mandate.

Holcomb also announced new caps on social gatherings starting this weekend, based on which color zone (determined by weekly cases per 100,000 and seven-day positivity rate) counties are in.

And North Dakota officials announced the extension of two orders that require face coverings and limit capacity at bars, restaurants and other event venues.

20 million people could get vaccinate in the next few weeks

The first emergency use authorization for a vaccine is expected soon, and about 20 million people could likely get vaccinated in the next few weeks, Secretary of Health and Human Services Alex Azar said Wednesday.

In the UK, thousands of people were already vaccinated Tuesday, the first day of the Pfizer/BioNTech vaccine rollout there, according to the National Health Service (NHS).

A day later, health officials said people with "a significant history of allergic reactions" should not be given the vaccine, after two health care workers experienced symptoms after receiving a shot.

The FDA will not "cut any corners" when deciding whether to authorize the vaccine, Azar said, saying he was sure what happened in the UK would be "something the FDA looks at."

Azar said he remains confident that by the end of the second quarter of 2021, any American who wants a vaccine will be able to get one.

But "even as we have such a bright future ahead, we face extremely concerning trends in the spread of the virus," he said.

"For now, we need to double down on the steps that can keep us all safe."