A Tapestry of Gestures and Mesmerizing Eyes 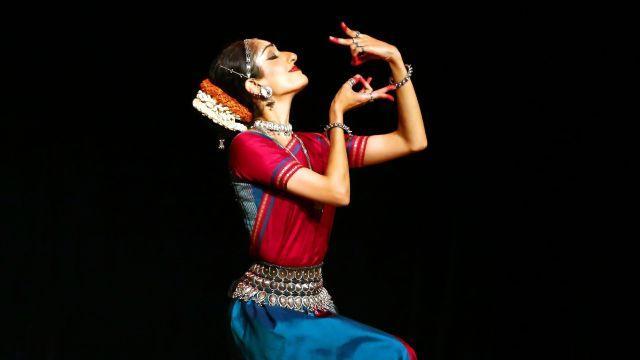 NEW YORK — Radha, goddess and lover, consumed by love for Krishna, has awaited his arrival all night long. But when he comes, his eyes are heavy with sleepiness and his lips are dark with kohl from the eyes of another woman. Radha disregards his excuses. She tells him to leave her alone.

The Indian classical forms tend to divide into abhinaya, expressional movement with a striking mime emphasis; and nritta, dance as pure form. Mudgal, dancing to taped music, had already proved herself a beautiful exponent of nritta, marvelously coordinating lower-body steps, upper-body gesture, facial expression and changes of direction. But in the third item on the program — “Ashtapadi,” a sustained example of abhinaya — her spell immediately deepened.

Watching Mudgal’s program, I began to feel, as I have sometimes in the past, that no other dance forms match the classical ones of India. I had seen her dance before, but sharing the space with other performers. On Monday, when she danced alone, I was amazed by how fully she seemed one of India’s most remarkable dancers.

All Radha’s emotion is hushed, even when at one point she falls to the floor. And there are moments of phenomenal stillness, as when Radha sits, arms sculpturally but gently folded above her head: waiting, waiting. Now the flute, instrument of Krishna, sounds. The soft hopefulness with which Radha returns to motion is exquisite: Krishna’s presence touches her back to life.

Other moments of stillness occur as Radha looks toward Krishna — always on the same stage diagonal, to show he is approaching her threshold by way of a known path. Her body, face and eyes all sustain the same image of quiet sorrow, as if preserving it in amber.

Dancers everywhere — actors, too — can and should learn the language of the eyes from watching the best Indian dancers; there are moments when the rest of the body seems to fade, so that all you see are eyes, eyes, eyes. Mudgal’s acting is wonderfully eloquent, entirely stylized, utterly convincing. Radha expresses herself in a lexicon of gestures — she indicates Krishna’s sleep-heavy eyelids, for example — but it is her larger poignancy, so quietly and ruefully conveyed, that makes a deeper impression than any specific.

As this performance showed, the range of thought — emotional, philosophical, religious — covered by an Indian recital is immense. The carnal and the divine meet in the loves of Krishna and Radha; order and destruction are joined in the person of Shiva, lord of the cosmic dance; masculine and feminine meet in the androgyne Ardhanarishvara.

Movement and stillness both alternate and combine in the dancing itself, as do communicative expression and formally academic classicism.

All these profound elements coexist in Mudgal’s long, final solo, “Murta-Amurta” (“Form-Formlessness”). Lasting more than 20 minutes, it contemplates the energy that is variously identified as Brahma, Shiva, Shakti, Krishna, Rama, Allah and Christ. There are many details that will register far more precisely to those acquainted with Indian culture: I recognized the physical motifs associated with Shiva and Krishna. But the solo passes through so great a range of moods and textures that its expression transcends these details: It goes through one mystery after another, with long rhythmic phrases of footwork, strikingly differentiated gestures and marvelous pauses. At one central moment, she folds forward over onto the floor as if in obeisance. When she rises, she is changed, opening a new thought.

The genre practiced by Mudgal is Odissi, deriving from the temple-dense Odisha or Orissa on India’s eastern coast. She’s a niece of the great Madhavi Mudgal (her dance guru), one of Odissi’s foremost exponents, who choreographed two of her numbers. Arushi Mudgal’s father, Madhup Mudgal, composed most of her music. Three other numbers on this recital were choreographed by Kelucharan Mohapatra (1926-2004), the most influential of the teachers who restored Odissi to renown after it had come close to extinction in the mid-20th century.

I find Odissi the most sensuous of the Indian dance forms: It moves different planes of the torso (notably shoulders, waist, pelvis) against each other with subtly gorgeous tension. I also find it the most lyrical. Although I have visited Orissa and other parts of India, I watch as an outsider. Yet Odissi, as seen Monday, speaks movingly and on many levels, even to those of us who are strangers to its language.

Through Aug. 19 at La MaMa; driveeastnyc.org.