A Store Had to Move Thousands of Books. So a Human Chain Was Formed. 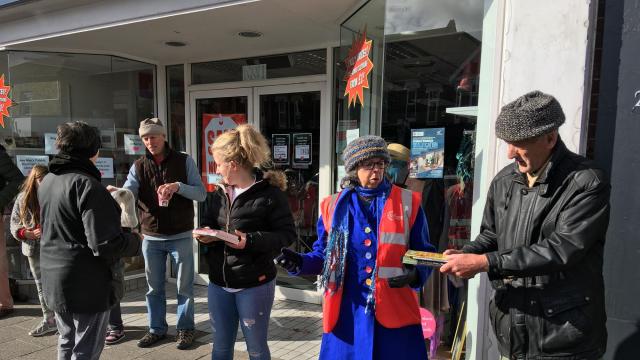 LONDON — The plea went out a few weeks ago from the bookstore in a port city in southern England: “Care to lend a hand?”

Volunteers were needed for “heavy manual work” in shifts. It was “essential” that they be able to lift and carry boxes and office supplies.

Among the supplies: thousands upon thousands of books.

The appeal from October Books, a nonprofit that began 40 years ago as a “radical” bookshop, came after a rent increase forced it from its old home in Southampton, Jess Haynes, a member of the collective and one of the few paid employees, said Wednesday.

The shop was looking to move lock, stock and barrel about 150 meters (just under 500 feet) to a three-story building that used to house a bank. Would anybody respond to the call for help?

This past Sunday, the bookstore got more than a helping hand — it got hundreds.

A human chain began forming from the old October Books stockroom, snaking past 54 doors to the new building.

The shop stopped counting after about 250 people showed up, Haynes said by phone.

Hand-to-hand, the chain of people passed thousands of books over a few hours.

“It was very moving,” Haynes said, adding that the employees were “all getting choked up” about how members of the community had leapt to help out.

It was the local community, after all, that came to the bookshop’s rescue more than once before — including when, after 15 years, it had to move because the rent increased. The store settled on a former bank building up the street.

But instead of taking out a mortgage, Haynes said, October Books boldly started a fundraising drive to buy its new home, setting a goal of 510,000 pounds, or about $650,000, by May 31.

The move paid off, and the shop entered into arrangements to receive community donations and loans, agreeing to pay back the latter over one, five or 10 years, Haynes said.

At a time when independent bookshops are disappearing, she said, “we believe in the value of bookshops.”

Last year, the Booksellers Association noted that the number of independent bookshops in Britain had fallen for the 11th year in a row. In 2005, there were 1,535 independent stores, but by 2017 that figure had fallen to 867.

The association cited “a cocktail of pressures” for the closings, including rising rents, competition from e-books and online sellers, along with the rising popularity of other entertainment platforms like Netflix and gaming.

October Books originally began as a small shop for feminist, LGBT, socialist and Green Party literature, she said. It later expanded to fiction, children’s literature and books about organic food and fair trade. Now, it has five paid employees, a social media guru and part-time volunteers.

The shop wanted the move on Sunday to be a special event.

“We wanted something that was accessible for the whole family, for children and people who were older who wouldn’t necessarily be able to paint or move heavy pieces, to help out,” Haynes said.

“It was a lovely way of including everyone and get the whole community involved. We’ve got a lot of goodwill in our community.”

The shop plans to sell the second floor of the former bank building to a charity in Southampton to create supportive housing for homeless people, and to create a community hub in the back, she said. As a nonprofit, any income would be reinvested the business.

Haynes said the bookstore was still moving. Opening day is scheduled for Saturday.