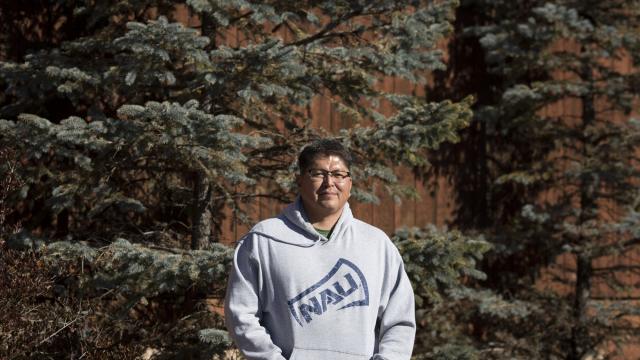 MONUMENT VALLEY, Utah — Garry Holiday grew up among the abandoned mines that dot the Navajo Nation’s red landscape, remnants of a time when uranium helped cement America’s status as a nuclear superpower and fueled its nuclear energy program.

It left a toxic legacy. All but a few of the 500 abandoned mines still await cleanup. Mining tainted the local groundwater. Holiday’s father succumbed to respiratory disease after years of hacking the ore from the earth.

But now, emboldened by the Trump administration’s embrace of corporate interests, the uranium mining industry is renewing a push into the areas adjacent to Holiday’s Navajo Nation home: the Grand Canyon watershed to the west, where a new uranium mine is preparing to open, and the Bears Ears National Monument to the north.

The Trump administration is set to shrink Bears Ears by 85 percent next month, potentially opening more than 1 million acres to mining, drilling and other industrial activity. But even as Interior Secretary Ryan Zinke declared last month that “there is no mine within Bears Ears,” there were more than 300 uranium mining claims inside the monument, according to data from Utah’s Bureau of Land Management office that was reviewed by The New York Times.

The vast majority of those claims fall neatly outside the new boundaries of Bears Ears set by the administration. And an examination of local BLM records, including those not yet entered into the agency’s land and mineral use authorizations database, shows that about a third of the claims are linked to Energy Fuels, a Canadian uranium producer. Energy Fuels also owns the Grand Canyon mine, where groundwater has flooded the main shaft.

Energy Fuels, together with other mining groups, lobbied extensively for a reduction of Bears Ears, preparing maps that marked the areas it wanted removed from the monument and distributing them during a visit to the monument by Zinke in May.

Energy Fuels’ lobbying campaign, elements of which were first reported by The Washington Post, is part of a wider effort by the long-ailing uranium industry to make a comeback.

The Uranium Producers of America, an industry group, is pushing the Environmental Protection Agency to withdraw regulations proposed by the Obama administration to strengthen groundwater protections at uranium mines. Mining groups have also waged a six-year legal battle against a moratorium on new uranium mining on more than 1 million acres of land adjacent to the Grand Canyon.

For the Navajo, the drive for new mines is a painful flashback.

“Back then, we didn’t know it was dangerous — nobody told us,” Holiday said, as he pointed to the gashes of discolored rocks that mark where the old uranium mines cut into the region’s mesas. “Now they know. They know.”

Supporters of the mining say that a revival of domestic uranium production, which has declined 90 percent since 1980 amid slumping prices and foreign competition, will make the United States a larger player in the global uranium market. It would expand the country’s energy independence, they say, and give a lift to nuclear power, still a pillar of carbon-free power generation. Canada, Kazakhstan, Australia, Russia and a few other countries now supply most of America’s nuclear fuel.

The dwindling domestic market was thrust into the spotlight by the contentious 2010 decision under the Obama administration that allowed Russia’s nuclear agency to buy Uranium One, a company that has amassed production facilities in the United States. The Justice Department is examining allegations that donations to the Clinton Foundation were tied to that decision.

“If we consider nuclear a clean energy, if people are serious about that, domestic uranium has to be in the equation,” said Jon J. Indall, a lawyer for Uranium Producers of America. “But the proposed regulations would have had a devastating impact on our industry.”

“Countries like Kazakhstan, they’re not under the same environmental standards. We want a level playing field.”

Scaling Back a Monument

The trip was one of the earliest made by Zinke to the vast lands he oversees as secretary of the interior: a visit to Bears Ears, where he struck a commanding figure, touring the rugged terrain on horseback.

A notable presence on Zinke’s trip was Energy Fuels, the Canadian uranium producer. Company executives openly lobbied for shrinking Bears Ears’ borders, handing out the map that marked the pockets the company wanted removed: areas adjacent to its White Mesa Mill, just to the east of the monument, and its Daneros Mine, which it is developing just to the west.

“They wanted to talk to anyone who’d listen,” said Commissioner Phil Lyman of San Juan County, Utah, a Republican who participated in the tour and is sympathetic to Energy Fuels’ position. “They were there representing their business interest.”

Zinke has insisted that mining played no role in the decision to shrink Bears Ears, and a department spokeswoman said he had met with interested parties on all sides.

But President Donald Trump has prioritized scrapping environmental regulations to help revitalize domestic energy production. His executive order instructing Zinke to review Bears Ears said improper monument designations could “create barriers to achieving energy independence." In theory, even after President Barack Obama established Bears Ears in 2016, mining companies could have developed any of the claims within it, given proper local approvals. But companies say that expanding the sites, or even building roads to access them, would have required special permits, driving up costs.

Energy Fuels said it had sold its Bears Ears claims to a smaller company, Encore Energy, in 2016. But Encore issued shares to Energy Fuels in return, making Energy Fuels Encore’s largest shareholder, with a seat on its board.

Curtis Moore, an Energy Fuels spokesman, said the company had played only a small part in the decision to shrink Bears Ears. The company proposed scaling back the monument by just 2.5 percent, he said, and was prepared to support a ban within the rest of the original boundaries.

Yet two weeks after Zinke’s visit, Energy Fuels wrote to the Interior Department arguing there were many other known uranium deposits within Bears Ears “that could provide valuable energy and mineral resources in the future” and urging the department to shrink the monument away from any “existing or future operations.”

A bill introduced last month by Rep. John Curtis, R-Utah, would codify Trump’s cuts to the monument while banning further drilling or mining within the original boundaries. But environmental groups say the bill has little chance of passing at all, let alone before the monument is scaled back next month.

“Come February, anyone can place a mining claim on the land,” said Greg Zimmerman, deputy director at the Center for Western Priorities, a conservation group. New Mine, New Challenges

At the end of a dirt road just 6 miles from the Grand Canyon’s South Rim, the uranium industry’s renewed ambitions, and challenges, are on display.

Three decades after exploratory drilling uncovered uranium deposits, production at Energy Fuels’ Canyon Mine is finally starting up, the wheel above a 1,500-foot shaft slowly turning during a recent visit. The company calls Canyon Mine a “high-grade” project, with the potential to compete with mines overseas.

It is already running into trouble.

As workers drilled into the formations that make up the region’s distinct rock layers last year, they hit shallow groundwater. The water flooded the mine’s shaft, forcing workers to pump the runoff — by then contaminated with uranium — into open ponds, where they used industrial sprayers to speed evaporation. Those sprayers were present during a recent visit, and water could be seen from outside the compound continuing to pour into a large evaporation pond.

Energy Fuels officials said hitting shallow groundwater was to be expected, and rejected concerns that contamination could escape.

Still, Fred Tillman, an environmental engineer with the U.S. Geological Survey, said during a recent visit to the mine that the groundwater flows in the region were too complex to rule out the risk of contamination.

Even as troubles persist on the ground, the industry pushback has continued.

A Senator Steps In

In court, mining groups led by the National Mining Association have challenged a 20-year moratorium on mining in the Grand Canyon watershed, established in 2012 by the Obama administration. (The Canyon Mine predates the moratorium.)

A federal court of appeals upheld the moratorium last month. But the U.S. Forest Service has recommended rolling back the protections, meaning the Trump administration could soon reverse them on its own.

The Arizona Chamber of Commerce, which represents mining interests, also backed an effort to defeat a separate proposal that would have permanently banned mining on 1.7 million acres surrounding the Grand Canyon. An Energy Fuels executive testified in Congress against the ban.

And with the help of Republican senators like John Barrasso of Wyoming, the industry has pressed the EPA to withdraw an Obama-era proposal that would strengthen groundwater protections at uranium mines. Barrasso has received more than $350,000 in campaign contributions from mining groups over his career. His office did not respond to requests for comment.

The proposal would regulate a mining method called in-situ recovery, which involves injecting a solution into aquifers containing uranium and bringing that solution to the surface for processing — a method criticized by environmentalists as posing wider contamination risks.

The rule is unnecessary and will cost jobs, Indall, the lawyer for Uranium Producers of America, said in a letter to Scott Pruitt, the EPA administrator. In July, UPA representatives met with Pruitt and Energy Secretary Rick Perry to press their case.

The EPA said in a statement that it was “reviewing options for next steps.”

Last month, Barrasso again called on the agency to withdraw the rule, calling it “unreasonably burdensome.”

The Navajo town of Sanders, Arizona, a dusty outpost with a single stoplight, is a reminder of uranium’s lasting environmental legacy.

In Sanders, hundreds of people were exposed to potentially dangerous levels of uranium in their drinking water for years, until testing by a doctoral researcher at Northern Arizona University named Tommy Rock exposed the contamination.

“I was shocked,” Rock said. “I wasn’t expecting that reading at all.”

Rock and other scientists say they suspect a link to the 1979 breach of a wastewater pond at a uranium mill in Church Rock, New Mexico, now a Superfund site. That accident is considered the single largest release of radioactive material in U.S. history, surpassing the crisis at Three Mile Island.

It wasn’t until 2003, however, that testing by state regulators picked up uranium levels in Sanders’ tap water. Still, the community was not told. Erin Jordan, a spokeswoman for the Arizona Department of Environmental Quality, said the department had urged the now-defunct local water company for years to address the contamination, but it had been up to that company to notify its customers.

Only in 2015, after Rock raised the alarm, did local regulators issue a public notice.

The town’s school district, whose wells were also contaminated with uranium, received little state or federal assistance. It shut off its water fountains and handed out bottled water to its 800 elementary and middle-school students.

The schools finally installed filters in May. Parents remain on edge.

“I still don’t trust the water,” said Shanon Sangster, who still sends her 10-year-old daughter, Shania, to school with bottled water. “It’s like we are all scarred by it, by the uranium.”