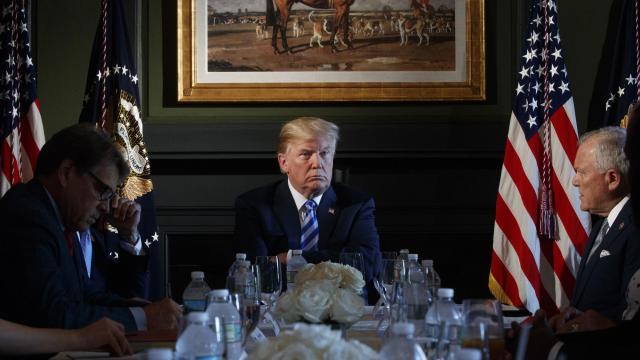 The news that a New Jersey golf course owned by President Donald Trump, who has made border security and the fight to protect jobs for Americans a cornerstone of his presidency, had been employing unauthorized immigrants as housekeepers was far from the first such revelation about a prominent public official.

Here are a few other cases that made national headlines.

Deported as a Child

When President Richard Nixon sought to make inroads among Latino voters in his re-election campaign, he nominated Romana Acosta Bañuelos, a Mexican-American woman, to be the treasurer of the United States, the official in charge of the nation’s currency. During her Senate confirmation in 1971, government agents raided the food company she had founded in Los Angeles and found immigrants working there who were unauthorized.

Though Mexican-American labor activist Cesar Chavez testified against Bañuelos on Capitol Hill, her nomination survived, and she went on to serve for about two years. Senators believed that she did not know about the unauthorized workers and that the raid had been instigated to embarrass the White House.

Bañuelos, who had also helped establish the first Latino-owned bank in California, had been deported as a child, when the government sent her family and more than 1 million other people of Mexican descent to Mexico because of job scarcity in the United States during the Great Depression.

In late 1992 and early 1993, President Bill Clinton looked to make history by naming the nation’s first female attorney general to his Cabinet. He eventually accomplished that with Janet Reno, but only after his first two nominees for the post were forced to withdraw.

Zoë Baird, a corporate lawyer in Connecticut, was found to have hired two unauthorized Peruvian immigrants as a baby sitter and a driver — and to have knowingly neglected to pay the required taxes for household employees. She had informed Clinton’s transition team about the employees, but the president-elect nominated her anyway, and dropped her only after public outrage mounted.

Clinton’s next choice then fell victim to the charged political environment. Judge Kimba M. Wood, a U.S. District Court judge in New York, had employed an unauthorized Trinidadian as a baby sitter in 1986, shortly before a federal law took effect making it illegal to hire an unauthorized immigrant. The baby sitter became a legal resident in 1987.

Even though there was no evidence that Wood had done anything illegal, the White House asked her to withdraw her name because they feared another public backlash like the one against Baird.

Clinton’s third choice, Reno, had no such difficulty, and served in the Cabinet throughout his presidency.

When Mitt Romney ran for the Republican presidential nomination in 2008, he accused one of his opponents, Rudy Giuliani, of running a sanctuary city for unauthorized immigrants while he was mayor of New York. But Giuliani had a comeback ready: He accused Romney of running a “sanctuary mansion.”

The Boston Globe had just revealed that Romney, a former governor of Massachusetts, had carried on using a landscaping service at his house in Belmont, Massachusetts, after the newspaper had reported finding unauthorized Guatemalans among its employees — and that, a year later, the company was still using unauthorized workers.

Romney, who fired the service after the second report, did not win the nomination in 2008, but he did in 2012, losing to President Barack Obama in the general election. In November he was elected to a Senate seat in Utah.

When Meg Whitman spent $140 million of her own money to run for governor of California as a Republican in 2010, she tried to thread a political needle, and be seen by conservatives as tough on unauthorized immigration without alienating independents and Latino voters.

Then it emerged that Whitman, the former chief executive of eBay, had employed an unauthorized housekeeper for nearly a decade, before firing her in 2009.

Whitman went down to defeat by a wide margin; shortly afterward, she agreed to pay $5,500 to settle a claim brought by the housekeeper, Nicandra Díaz Santillán, that Whitman and her husband had shortchanged her on wages.

Another California Republican, Gov. Pete Wilson, ran successfully for re-election in 1994 promising to deny state benefits to unauthorized immigrants. The next year, he was forced to acknowledge employing one as a maid in his home. Wilson also acknowledged failing to pay Social Security taxes on the maid’s wages. Wilson eventually paid an estimated $3,000 in back taxes and penalties, and his ex-wife later took responsibility for the omission.

Whitman and Wilson each said that had they known the workers were not in the country legally, they would not have hired them.

The candidates of both major parties in California’s 1994 Senate race acknowledged employing immigrants who were not legally cleared to work.

Michael Huffington, the Republican, admitted that he had broken the law when his family employed a nanny who was originally from Mexico. The situation with Dianne Feinstein, the Democrat, was a bit more complicated.

Feinstein had employed a Guatemalan housekeeper who entered the country legally in 1979 with a permit to work at the Guatemalan consulate in San Francisco. She went to work for Feinstein, the mayor at the time, after the permit expired. Hiring an unauthorized immigrant was not illegal under federal law until 1986.

An immediate uproar from Senate Democrats and progressive groups greeted Trump’s nomination of Andrew Puzder, a restaurant-chain executive, to be secretary of labor. Puzder had criticized overtime rules championed by the Obama administration and opposed raising the federal minimum wage to $15 an hour.

Even so, his selection did not appear to stall until he acknowledged that he and his wife had employed an immigrant housekeeper for a few years who was not legally permitted to work.

Puzder immediately fired the woman and paid back taxes owed on her wages. He said the couple had not known she was unauthorized, and that he would help her gain legal status.

Democratic senators delayed his confirmation hearing, and when it became clear that Puzder did not have enough votes, he withdrew his name.