A Sense of Alarm as Rural Hospitals Keep Closing 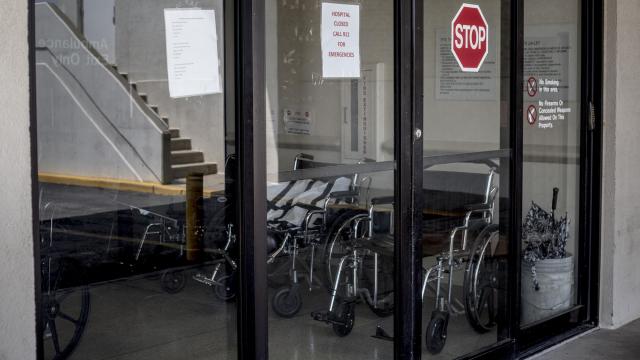 Hospitals are often thought of as the hubs of our health care system. But hospital closings are rising, particularly in some communities.

“Options are dwindling for many rural families, and remote communities are hardest hit,” said Katy Kozhimannil, an associate professor and health researcher at the University of Minnesota.

Beyond the potential health consequences for the people living nearby, hospital closings can exact an economic toll, and are associated with some states’ decisions not to expand Medicaid as part of the Affordable Care Act.

In its June report to Congress, the Medicare Payment Advisory Commission found that of the 67 rural hospitals that closed since 2013, about one-third were more than 20 miles from the next closest hospital.

A study published last year in Health Affairs by researchers from the University of Minnesota found that over half of rural counties now lack obstetric services. Another study, published in Health Services Research, showed that such closures increase the distance pregnant women must travel for delivery.

And another published earlier this year in JAMA found that higher-risk, preterm births are more likely in counties without obstetric units. (Some hospitals close obstetric units without closing the entire hospital.)

Kozhimannil, a co-author of all three studies, said, “What’s left are maternity care deserts in some of the most vulnerable communities, putting pregnant women and their babies at risk.”

In July, after The New York Times wrote about the struggles of rural hospitals, some doctors responded by noting that rising malpractice premiums had made it, as one put it, “economically infeasible nowadays to practice obstetrics in rural areas.”

Many other types of specialists tend to cluster around hospitals. When a hospital leaves a community, so can many of those specialists. Care for mental health and substance use are among those most likely to be in short supply after rural hospital closures.

The closure of trauma centers has also accelerated since 2001, and disproportionately in rural areas, according to a study in Health Affairs. The resulting increased travel time for trauma cases heightens the risk of adverse outcomes, including death.

In many communities, hospitals are among the largest employers. They also draw other businesses to an area, including those within health care and others that support it (like laundry and food services, or construction).

A study in Health Services Research found that when a community loses its only hospital, per capita income falls by about 4 percent, and the unemployment increases by 1.6 percentage points.

Not all closures are problematic. Some are in areas with sufficient hospital capacity. Moreover, in many cases hospitals that close offer relatively poorer quality care than nearby ones that remain open. This forces patients into higher-quality facilities and may offset negative effects associated with the additional distance they must travel.

Perhaps for these reasons, one study published in Health Affairs found no effect of hospital closures on mortality for Medicare patients. Because it focused on older patients, the study may have missed adverse effects on those younger than 65. Nevertheless, the study found that hospital closings were associated with reduced readmission rates, which is regarded as a sign of increased quality. So it seems consolidating services at larger hospitals can sometimes help, not harm, patients.

“There are real trade-offs between consolidating expertise at larger centers versus maintaining access in local communities,” said Karen Joynt Maddox, a cardiologist and health researcher with the Washington University School of Medicine in St. Louis and an author of the study. “The problem is that we don’t have a systematic approach to determine which services are critical to provide locally, and which are best kept at referral centers.”

Many factors can underlie the financial decision to close a hospital. Rural populations are shrinking, and the trend of hospital mergers and acquisitions can contribute to closures as services are consolidated.

Another factor: Over the long term, we are using less hospital care as more services are shifted to outpatient settings and as inpatient care is performed more rapidly. In 1960, an average appendectomy required over six days in the hospital; today one to two days is the norm.

Part of the story is political: the decision by many red states not to take advantage of federal funding to expand Medicaid as part of the Affordable Care Act. Some states cited fiscal concerns for their decisions, but ideological opposition to Obamacare was another factor.

In rural areas, lower incomes and higher rates of uninsured people contribute to higher levels of uncompensated hospital care — meaning many people are unable to pay their hospital bills. Uncompensated care became less of a problem in hospitals in states that expanded Medicaid.

In a Commonwealth Fund Issue Brief, researchers from Northwestern Kellogg School of Management found that hospitals in Medicaid expansion states saved $6.2 billion in uncompensated care, with the largest reductions in states with the highest proportion of low-income and uninsured patients. Consistent with these findings, the vast majority of recent hospital closings have been in states that have not expanded Medicaid.

In every year since 2011, more hospitals have closed than opened. In 2016, for example, 21 hospitals closed, 15 of them in rural communities. This month, another rural hospital in Kansas announced it was closing, and next week people in Kansas, and in some other states, will vote in elections that could decide whether Medicaid is expanded.

Richard Lindrooth, a professor at the University of Colorado School of Public Health, led a study in Health Affairs on the relationship between Medicaid expansion and hospitals’ financial health. Hospitals in nonexpansion states took a financial hit and were far more likely to close. In the continuing battle within some states about whether or not to expand Medicaid, “hospitals’ futures hang in the balance,” he said.