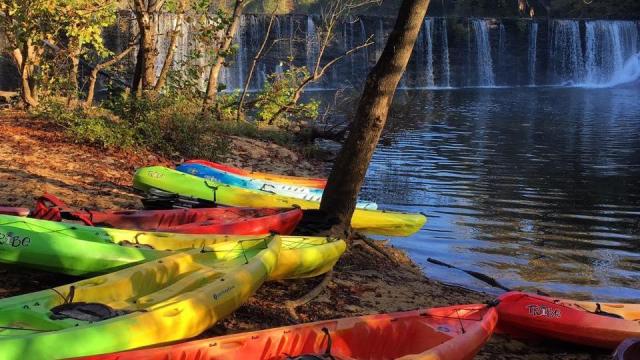 Geographically speaking, Sanford sits quite literally at the heart of North Carolina. Positioned directly in the middle of the state, right along the fall line, Sanford is on the border of the coastal plain and the Piedmont, offering access to the unique flora and fauna of both biomes.

In short: it's the best of both worlds. And for Sanford visitors and residents, outdoor adventure is easy to come by.

"There's a unique set of flora and even some animals that are associated with the longleaf pine woodland here in Lee County that you would not find any further west," said Jimmy Randolph, existing industry development manager at Sanford Area Growth Alliance and long-time outdoors enthusiast. "When you get to the fall line itself and move into the higher elevations, you get into rugged Piedmont terrain. You have an entirely different set of flora and fauna associated with these areas, and you can experience both by traveling maybe 10 minutes in either direction, right here in Lee County."

For Randolph, the prime example of Sanford's diverse ecosystem — and the number-one stop for an afternoon outdoors — can be found just 10 minutes away from downtown Sanford in San-Lee Park. With two dams creating an upper pond from the lower pond, scenic trails looping through the woods and around the waterfront, and a collection of rugged mountain bike paths, the park is a dream come true for nature lovers.

The ponds at the park are stocked with fish every year, and there are loaner fishing rods available on-site and free to use for children and families. Wander along the edge of the lake and across the rocky terrain, and you'll find a dazzling array of native wildflowers and plants tucked along the sparkling shores.

"In February and March, believe it or not — I call them trout lilies — but Erythronium, or dogtooth violet, which are little tiny yellow lilies with mottled leaves that look like the pattern on a trout in a mountain stream, are already blooming. Within a month, they'll have bloomed, the leaves will die back, and there'll be no trace of them," Randolph said. "It's a really cool, almost magical experience, to go out there this time of year and see thousands of these little yellow lilies blooming along the creek. There are some amazing creatures lurking back in there as well, like the little frogs along the streams."

"Throughout the course of the year — almost on a weekly basis — the flowers that you'll see change," he finished. "We have all of those native wildflowers, because it's so pristine out there. It's just a great place to escape."

While San-Lee Park is a go-to for Randolph, it's near-impossible to spend any time in Sanford without visiting the banks of the Deep River. A tributary of the Cape Fear River, the Deep River flows for miles around the outskirts of town, attracting anglers and outdoor enthusiasts alike, thanks in part to Sanford resident Chad Spivey, founder of Endor Paddle, a canoe and kayak rental service located on the river.

For Spivey, his family's history is deeply rooted in Sanford and the Deep River and can be traced back to some of the oldest landmarks along the banks of the waterfront.

"I feel like we got off the Mayflower and walked over to Sanford, then stayed and never left," Spivey joked. "We have a farmhouse in Chatham County about a mile off the river that's over 217 years old."

Growing up, Spivey spent his days picking potatoes at the family farm, then splashing around in the Deep River to cool off. Oftentimes, the only people out enjoying the water would be him and his family.

"When I got older, I realized that, for a place that has 43 miles of riverfront, you never see anybody out there, and it was kind of confusing to me," Spivey recalled. "I thought, 'I need to get folks out here. It's such a flat, beautiful river. There's no reason that you can't paddle a 4-year-old on a tandem kayak, or somebody in their 80s that can walk can't sit in a boat and float down this river.' You know?"

To do so, Spivey and his team improved access to the banks of the river by creating a makeshift ramp out of river rocks — although flooding or heavy rain would often wash their work away. More recently, with the support of N.C. General Assembly Representative John Sauls, Spivey has set plans in motion to put a legitimate boat ramp in place near McIver's Landing. Work on the ramp is slated to begin this fall.

With the help of Endor Paddle, Spivey and his team have reignited interest in the Deep River, making it one of the most popular stops for an afternoon outdoors in Sanford — and not just for the boating. Spivey also recommends walking quietly along the banks — you may just catch a glimpse of frolicking otters, swimming deer or soaring eagles.

While you're on the land around the Deep River, Spivey also recommends checking out one of Sanford's more hidden outdoor gems — one that Spivey knows about thanks to his family's long history in the area.

Around 150 years ago, his great-great-grandfather meandered along the banks of the Deep River, working at the Endor Furnace during the American Civil War. The furnace was one of the largest of its kind, providing iron ore that was then used to manufacture pistols, rifles, cannons, railroad locomotives and more. Although the furnace is still standing, the funding to restore it dried up, but Spivey still recommends making the trip out to take it in.

"It looks like an ancient Mayan ruin in the middle of nowhere. It's just massive," Spivey said. "The arches are beautifully crafted — they sculpted the keystone out of brownstone rock. It just looks gorgeous. That's probably one of my favorite places in Lee County."