A Quebec Comedian Is Happy to Offend in Multiple Languages 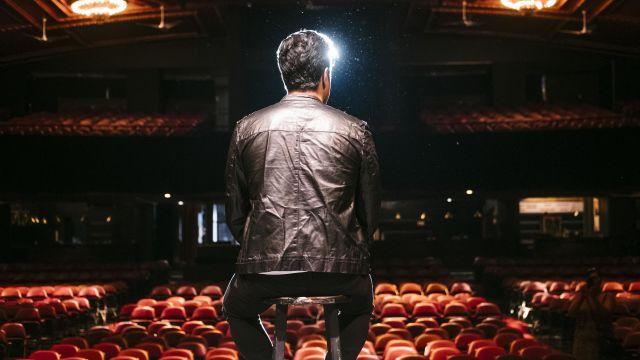 MONTREAL — A few years ago, the Quebec comedian Sugar Sammy put a giant ad on a Montreal subway billboard. “For Christmas,” it said, “I’d like a complaint from the Office de la Langue Française,” the Quebec watchdog responsible for preserving the French language.

His plea did not go unnoticed.

In Quebec, a French province surrounded by an English majority in the rest of Canada, sensitivities about language are profound, and large billboards must typically be only in French. Beyond prompting a complaint to the agency from an irate Montreal lawyer, the stunt spawned a loud debate about language, along with a death threat from a Québécois nationalist at his next show.

A fearless comic with a talent for provoking both laughter and outrage, Sammy, born Samir Khullar, is a 42-year-old son of Indian immigrants. He is also a child of Bill 101, the polarizing Quebec law behind the sign infraction, which requires immigrants to send their children to French schools. As a result, he glides effortlessly between English and French in his shows, and has made Quebec’s tortured identity politics his main preoccupation.

“Humor allows you to address taboos,” said Khullar, whose parents came to Montreal from northern India in the 1970s and who is far more soft-spoken in person than his swaggering, expletive-fueled stage persona would suggest. “In Quebec the ultimate taboo is identity,” he added.

At a recent packed show in a former 1920s cinema in Montreal, Khullar bounded across the stage, before diving into his favorite subject: those who want Quebec to separate from the rest of Canada.

“Are there any separatists here?” he asked in perfectly accented Québécois French. “Come on, don’t be shy.”

After a dozen people raised their hands, he continued, “Are you happy with where you are sitting, or do you want to separate from the rest of the audience and create your own section?” The mixed Anglophone and Francophone audience, including the hand-raisers, exploded with laughter.

He switched to English for a joke on President Donald Trump’s security strategy on the Mexican border. “We don’t have a lot of Latinos in Canada,” he said. “It’s too cold. We don’t need a wall. We have winter.”

When he first came up with the idea of doing a bilingual act, “You’re Gonna Rire” (“You’re Gonna Laugh”) in 2012, comedy producers told him he was crazy: The Anglophones wouldn’t understand the jokes in French, and the English humor would be lost on the Francophones.

So he produced it himself, and the show became an overnight sensation. It transformed Khullar, a virtuoso improvisor whose looks have been likened to Elvis, into a household name in Quebec, garnering him coveted comedy awards and making him a millionaire.

This being Quebec, he was also pilloried by some French-speaking Quebec nationalists for bastardizing the language of Molière by speaking Franglais. Anglophones who didn’t speak French were annoyed at feeling left out.

He was variously labeled a dangerous “Francophobe,” a federalist “fanatic,” and a political activist masquerading as a comedian.

“If Sugar Sammy is the future of Quebec, then Quebec has no future,” Mathieu Bock-Côté, a prominent Quebecois columnist, wrote in Le Journal de Montréal. Khullar has performed in 31 countries, including Switzerland, Malaysia and France, where GQ enthused that “the funniest person in France is Quebecois.”

He recently opened a show in Paris, where he is living for a time, with the line, “I’m happy to be in France. You guys are my favorite Arab country.”

Louise Richer, director of L'École nationale de l’humour in Montreal and a leading critic, said Khullar occupied a unique place by bridging Quebec’s cultural divide. “He’s a good barometer of a society that has come of age and can now laugh at itself,” she said.

Khullar embodies a new generation in Quebec less burdened by the language and culture wars of the past, said Marc Cassivi, a columnist for La Presse, a leading French-language newspaper, who wrote a book about bilingualism in Quebec.

“It is doubtful that Sugar Sammy would’ve survived as a comedian in Quebec of the 1970s, and would’ve left on the first train to Toronto,” Cassivi said.

Khullar’s humor was deeply informed by being the son of immigrants; his father sold juice out of the back of a truck before opening two convenience stores. His mother worked in a textile factory before eventually staying at home to raise the family. Growing up in a basement apartment in Côte-des-Neiges, a gritty multicultural neighborhood in Montreal, Khullar worked as a cashier at his father’s shops, which sold beef jerky and cigarettes and were called “Au Gourmet International.”

“There was nothing gourmet or international about it,” he said, laughing.

Immersed in French in school, Khullar and his younger brother spoke Punjabi and Hindi at home, and learned English on the street and by watching “The Dukes of Hazzard.” At his high school, where he was anointed the class clown at age 15, his best friends were Jewish-Moroccan, Haitian, Guatemalan and Chinese — a comedic focus group of sorts that he credits for his ability now to cross borders and make people laugh. He said he was largely sheltered from racism “because we were all immigrant kids,” adding that his Indian parents always supported his comedy. “If you come to my parents’ place you’re not leaving without watching a Sugar Sammy video,” he explained. “The guy will be, ‘I’m just here to deliver the mail.'”

His decision to become a comedian was clinched when he first saw Eddie Murphy’s 1983 stand-up comedy television special “Delirious” as a teenager and was attracted by his raw, unbridled humor. “Here you had this guy in bright red leather owning the stage with the charisma of a rock star,” he said. “I wanted to be that guy.”

Eager to find an original stage name, he settled on the nickname his female friends had given him when he was a party promoter while studying at McGill University: Sugar Sammy.

His political awakening as a comic came in 1995 during areferendum that asked Quebecers whether the province should become an independent country. After the “no” camp won with a bare 50.6 percent of the vote, Quebec Premier Jacques Parizeau, a leader on the “yes” side, blamed the result on, among other things, “the ethnic vote.”

The comments stung Khullar, who was 19. “Here I was a teenager who was doing everything to be part of Quebec society and I was being told that I was responsible for the failure of Quebec’s dream of statehood,” he recalled. “I realized that I would always be the ‘other’ in Quebec, no matter what language I spoke.”

Instead of stewing, he used his sense of alienation as fuel for his comedy.

One of his first big breaks came in 2004 when his show attracted attention at the Montreal-based “Just for Laughs” festival, the largest international comedy festival in the world. He became co-creator in 2014 of a successful French television sitcom called “Ces gars-là,” (“Those Guys”) in the spirit Larry David’s “Curb Your Enthusiasm,” and began crisscrossing the globe.

An ardent federalist who believes Quebec should remain a part of Canada, he takes mischievous pleasure in skewering those who he calls “separatists,” many of whom prefer to be identified as “sovereigntists.”

“I like picking on separatists because it’s fun!” he said in a performance of “You’re Gonna Rire.”

He brought up the referendum at a recent sold-out performance here. “There are two kinds of Quebecers,” he mused. “There are Quebecers who are educated, cultivated, well-brought up. Then you have those who voted ‘yes.'” Determined that his comedy have the whiff of authenticity, he obsessively prepares for his shows abroad by observing people on the subway, doing his laundry at public laundromats and eating at restaurants.

He has taken his acerbic humor to, among other places, the American Midwest. “I nearly got killed in Missouri because they think Canadians are communists,” he said. He has performed in English, Punjabi and Hindi in his parents’ India. And he traveled to Saudi Arabia to perform at a remote venue, where men and women sat together.

“People had such a good time — for that one hour they were free,” he said, recalling the performance. He added with cackle: “If only we felt that way in Quebec.”