The peanut is the most popular "nut" consumed in the United States, with around 69 percent of total nut consumption devoted to peanuts, peanut butter and other peanut-derived products, and studies suggest they provide not only a significant source of nutrition but also a way to reduce overall mortality and disease.

A 2013 study released in the New England Journal of Medicine tracked 119,000 people over a 30-year period. The purpose was to look at causes of death for those who consume nuts and peanuts to see if increased consumption led to a decrease in the rate of death.

This study showed peanuts to have a clear connection to improved health and longevity. When considering if the participants who ate peanuts fared differently than those who ate other nuts, Dr. Charles Fuchs, leader of the research team concluded, "We don't see any difference in the benefits between peanuts and tree nuts."

There were some objections to the population samples of this study, though. The suggestion was that because those studied were generally of a higher socioeconomic class, there were other factors in common among the participants that could have also been causative. Since then, another more comprehensive study was conducted on the same topic.

Vanderbilt University's 2015 study used a sample of 200,000 people of different races in both the southeastern United States, as well as in Shanghai, China.

Consistent with the 20 percent drop from the 2013 study, Vanderbilt found a 21 percent drop among its American participants and a 17 percent reduction in mortality among participants in Shanghai. There were especially large reductions in cardiovascular-related deaths among all populations.

"Nut consumption was associated with decreased overall and cardiovascular disease mortality across different ethnic groups and among individuals from low [socioeconomic status] groups," the study concluded. "Consumption of nuts, particularly peanuts given their general affordability, may be considered a cost-effective measure to improve cardiovascular health."

This served the dual purpose of removing the earlier doubt around the New England Journal of Medicine study, while also bolstering its findings. 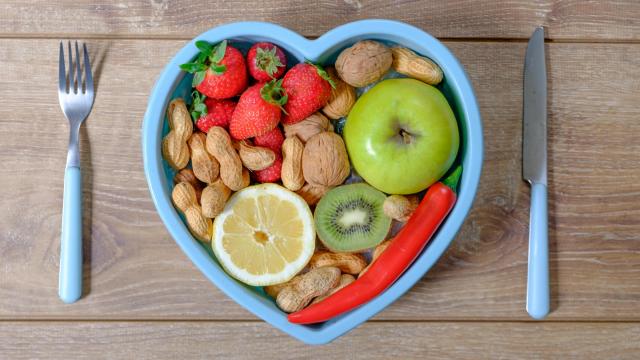 A Key to Protecting Your Heart

The American Heart Association gives salted, roasted, unsalted and other common types of peanuts their Heart-Check logo. This signifies the snack is below 140 mg of sodium (even salted peanuts only have 91 mg), has less than 4 grams of saturated fats and has 10 percent of a day's allotment of at least one vital nutrient.

With no trans fats, 2 grams of saturated fats and no cholesterol, peanuts easily clear this hurdle.

Also, peanuts have antioxidants, like arginine, which add extra heart-healthy benefits. Arginine is known to relieve blood pressure and lower bad cholesterol, adding to peanuts' cardiovascular bona fides since peanuts have more arginine than any other known food.