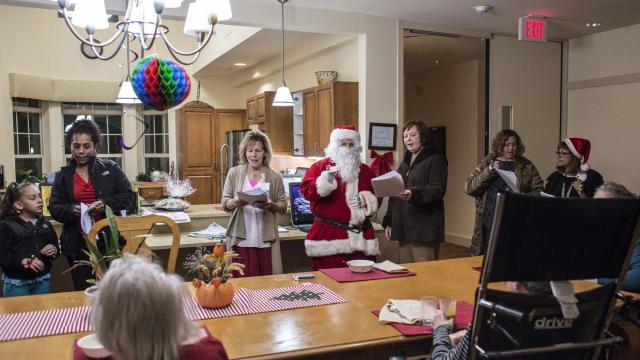 Lots of things look different when you step into a small Green House nursing home.

The bright living and dining space, filled with holiday baubles at this season. The adjacent open kitchen, where the staff is making lunch. The private bedrooms and baths. The lack of long stark corridors, medication carts and other reminders of hospital wards.

I was visiting the Green House Homes at Green Hill, a continuing care facility in West Orange, New Jersey. Dorothy Bagli, who’s 91, showed me her room, looking out onto the garden and filled with artwork from home and photos of her grandchildren. (Her son is a reporter at The New York Times.)

“I’ve gotten to know most of the people that live here,” she said — an easier task when there are only 10 residents.

“It’s very intimate,” agreed Eleanor Leonardis, who declined to give her age and is recuperating from a nasty fall. “It feels a lot like home.”

But the thing that struck me most was a man sitting alone at the communal table, having his breakfast oatmeal — at noon. The staff knows that he doesn’t like eating early in the day.

At conventional nursing homes, aides have to hustle residents out of bed, help them dress, escort them to the dining room by whatever time breakfast is served, and then perhaps whisk them off for physical therapy. These facilities struggle to provide even a smidgen of personal autonomy.

Here, physical therapists come to the Green House Homes. If they find a resident still asleep, they come back later.

The Green House Project, which in 2003 opened its first small nursing homes in Tupelo, Mississippi, counts just 242 licensed homes in 32 states to date, with 150 more in various stages of planning or construction. (Next up: Bartlett, Tennessee; Lima, Ohio; and Little Rock, Arkansas.) That’s a droplet in the bucket of the nation’s more than 15,000 nursing homes. But few aspects of aging generate quite so much anticipatory horror as nursing homes, and so Green Houses have attracted disproportionate attention, including media coverage.

They seem to embody change. “The numbers are still modest, but it truly is a different model of care,” said Sheryl Zimmerman, a gerontologist and health services researcher at the University of North Carolina at Chapel Hill.

What wasn’t clear, until Zimmerman and a team of researchers around the country undertook the most comprehensive research to date on Green Houses, was how good a job these newcomers do. “Does this model work?” she asked. “Is it sustainable and replicable?”

The group’s study of nearly 100 Green Houses compared with standard nursing homes, funded by a $2 million grant from the Robert Wood Johnson Foundation and published in the journal Health Services Research, showed that Green Houses don’t fulfill all their goals and promises.

Though “control over the rhythms of the day” represents a pillar of Green House life, as one of its brochures declares, the researchers found that about a third of the homes didn’t allow residents to decide when they awakened, and most restricted when residents could bathe or shower. Compared with conventional nursing homes, Green Houses also are far less likely to offer formal activities.

But overall, the studies, incorporating nine years of data, add up to a positive report card. “Compared to traditional nursing homes, no doubt about it,” Zimmerman said. “It’s a preferable model of care.”

An aide (in Green House lingo, a shahbaz) who knows residents well is also better able to spot health problems early on. “Because aides were in closer and more consistent contact, they were more aware of changes in residents’ conditions,” Zimmerman said.

A Green House shahbaz spends many more hours on patient care: an average 4.2 hours per resident per day, compared with 2.2 hours in conventional nursing homes. (At Green Houses, that includes tasks like preparing meals and doing laundry.)

— Though Green Houses are expensive to build (including a $200,000 payment to the nonprofit Green House Project for training, design and support), with 8 percent higher operating costs than standard nursing homes, they save Medicare 30 percent per resident per year. (They charge residents or their insurers somewhat more than regular nursing homes, however.) Developers also seem able to adapt them for particular populations. They’ve built Green Houses for assisted living, for veterans, for a public housing agency, for people with dementia and multiple sclerosis.

She’s troubled by how slowly the model has spread, partly because of complex state regulations and financial obstacles.

Critics who deplore the state of U.S. nursing homes have called for a “culture change” for at least 20 years. That means “deinstitutionalizing nursing homes, making them more like the way we’ve lived all our lives, with our own routines and familiar objects,” said Robyn Grant, public policy director for the National Consumer Voice for Quality Long-Term Care.

We’ve made only modest progress toward that goal, Grant said. Perhaps one function of the Green House model, then, is to point the way.

“There are many elements of it that could be done by other nursing homes,” Grant said. “There are ways to break down the size and make nursing homes smaller,” with workers consistently assigned to a group of residents. Facilities could be redesigned to offer private rooms; they could give residents more say over their routines. At Green Hill (disclosure: my late father lived there for a year and a half, though not in a Green House), Dorothy Bagli’s family has discussed whether to move her into the facility’s traditional nursing home, which costs slightly less. But Jeanne Jenusaitis, one of her 12 children, thinks the small scale of the Green House suits her mother.

Wouldn’t her mother, who has dementia, get disoriented trying to find her way through the long nursing home corridors? Would there be a staff person always in sight to assuage her fears?

Her Green House, Jenusaitis said, “is so much more nonclinical. She likes that feeling of home.”