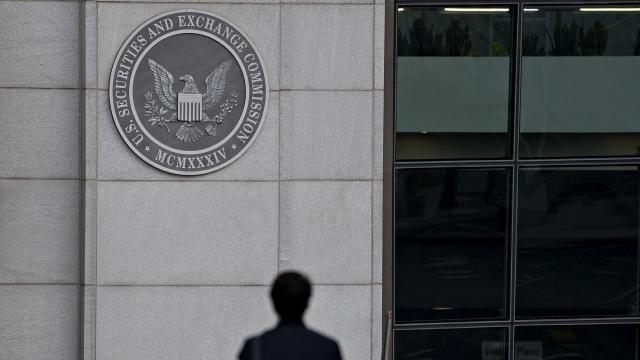 CNN — Someone just scored a $114 million payday -- without playing the lottery or stepping into a casino. Instead, the check was signed by Uncle Sam.

The Securities and Exchange Commission awarded the staggering $114 million to a whistleblower who tipped the government off to misconduct and provided "extraordinary" assistance in an investigation, the agency announced Thursday.

That more than doubles the prior SEC whistleblower record, which was set just four months ago.

"I hope this record-breaking award encourages others with information about possible securities laws violations to step forward," Jane Norberg, head of the SEC's whistleblower office, told CNN Business in an exclusive interview.

The huge award should also serve as a loud warning to Corporate America.

In this case, the whistleblower initially reported the wrongdoing internally, to no avail. At that point he or she tipped off the SEC.

"One big lesson from this award is that companies should take reports from whistleblowers seriously," Norberg said. "Because it is likely that the SEC already has the information, or will shortly thereafter. And we will follow up on it."

In other words: Bad guys, watch out.

The path this whistleblower took -- reporting it first internally with no success before going to the authorities -- is common, Norberg said.

"People just get frustrated," she added. "They become quite disenchanted and that's when they come to the SEC. Whistleblowers are often employees who can't live with seeing wrongdoing happening at the company."

The types of shady behavior that whistleblowers have helped the SEC uncover include everything from Ponzi schemes and insider trading to market manipulation and bribery.

"These whistleblower tips have a huge impact on our enforcement program. It's a gamechanger," Norberg said.

The SEC fiercely protects the identities of whistleblowers, which means we may never know who received the $114 million award, or what misconduct he or she helped uncover.

"It's incredibly serious," Norberg said of the confidentiality. "People have to feel comfortable to come to us."

The SEC did say that the award included about $52 million tied to its case, plus $62 million from related actions taken by another unnamed agency. And, the SEC said, the whistleblower endured "personal and professional hardships."

A record year for whistleblowers

"This is the type of award that changes cultures," said Kohn, a whistleblower attorney at Kohn, Kohn & Colapinto. "It incentivizes people to come forward and it also deters wrongdoing. It makes it very real for people who are thinking about engaging in fraud. They realize there is a strong likelihood they'll be turned in."

Lately, it's been a particularly lucrative time to be a whistleblower.

The SEC handed out 39 individual whistleblower awards totaling about $175 million during the fiscal year that ended in September. That's more than in any year since the agency's whistleblower office launched in 2011. And the SEC received a record number of tips last year about potential wrongdoing.

(The Internal Revenue Service has its own whistleblower office, created in 2007, as well as its own awards.)

"When we first started, we were a really small shop. Early on in the program, we were wondering if it would be successful," said Norberg, who served as the whistleblower office's first deputy chief. "Then the tips started coming in. It just grew and grew and grew."

Since its first payment in 2012, the SEC has awarded a total of $676 million to 108 individuals. The awards are paid out of a pool of money financed entirely through fines the SEC collects, not taxpayer money.

Norberg said the record-setting year was made possible by efforts to streamline the way the agency hands out rewards.

Money and revenge can be motivating factors, too

The whistleblower program helps uncover shady activity by dangling a lucrative financial incentive for employees and investors who might otherwise stay quiet.

Awards range between 10% and 30% of the fines imposed in SEC actions that result from whistleblower tips. And under new rules, awards of $5 million or less -- which are the majority of rewards -- are presumed to get the maximum 30%.

The SEC passes whistleblower tips on to investigators to dig into the matter. If that information helps lead to successful enforcement action, the tipster is eligible for a cut of the penalties paid.

"The money is also a motivating factor. It can push someone who is otherwise on the fence to report their concerns," said Norberg. "There is a real hardship, both personal and professional, that people endure. The money, I hope, helps."

And at times, revenge can also be a motivating factor.

"I've seen whistleblowers who have personal relationships with the wrongdoer and they report on them when the relationship goes sour," Norberg said.

In an era when even the most routine government agencies are politicized, the whistleblower program has survived countless efforts to gut it -- and emerged with bipartisan support for its success in catching fraudsters.

That's a big shift considering the program was borne of Dodd-Frank, the controversial Wall Street reform law that was enacted in 2010 despite steep opposition from Republicans and the banking industry. Critics worried the whistleblower office would discourage employees from flagging wrongdoing internally.

Over nearly a decade, SEC whistleblower tips have led to more than $2 billion in penalties and the return of $500 million to harmed investors.

"It was a great victory for oversight and accountability," said Kohn, who met with SEC Chairman Jay Clayton and other officials to persuade them to withdraw the proposal. "All successful whistleblower programs become bipartisan. The reason? They work."

Last month, the SEC imposed a new rule that enables the agency to permanently bar an applicant who abuses the process by submitting three frivolous award applications.

"We've had people who treat this program a bit like the lotto," Norberg said. "It's frustrating to me, especially when I know the real sacrifices that the real whistleblowers have made."

But there's one way where it is just like winning the lottery: Whistleblower awards are subject to federal and state taxes, which for the largest awards are taxed at up to 50%. And the lawyers who represent any whistle blower must pay taxes on their fees, too.