A Night of Reckoning (Awards, Too) 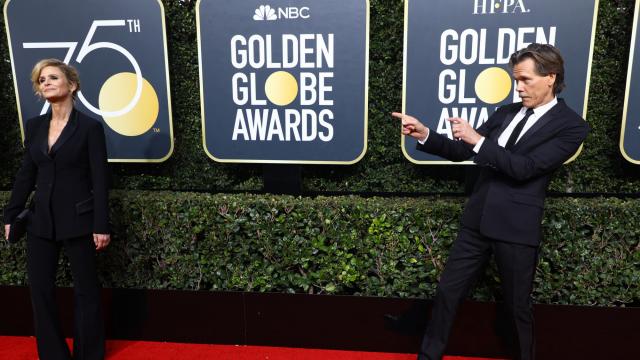 BEVERLY HILLS, Calif. — It took only four minutes for Harvey Weinstein to be booed Sunday night at the 75th Golden Globes.

Weinstein, who has been accused by dozens of women of misconduct — prompting police investigations, lawsuits and the collapse of his former studio — was a major figure at the Globes for decades. He was seen as a master manipulator of voters. He always sat at a prime table during the ceremony. His post-Globes parties were often the splashiest.

Seth Meyers, hosting the Globes for the first time, turned directly to what he called “the elephant not in the room” when he opened the NBC broadcast by saying, “Good evening, ladies and remaining gentlemen.”

He later said of Weinstein, “Don’t worry, he’ll be back in 20 years when he’s the first person booed during the ‘In Memoriam’ segment.”

The 2018 Globes were draped in black, quite literally, with actresses and some actors vowing to use their attire to make a statement about sexual harassment in Hollywood and other spheres. Winners were expected to use their moments of glory to rail against the systemic sexism and silence that allowed the behavior of men like Weinstein, James Toback, Louis C.K. and Kevin Spacey to fester for decades.

NBC and the givers of the Globes, the Hollywood Foreign Press Association, a group of 89 journalists, tried to assure viewers that the night inside the Beverly Hilton’s International Ballroom would be as frothy as ever. On Sunday’s red carpet, however, eight actresses walked hand in hand with activists who focus on sexual harassment and gender inequality.

“We don’t want to create hierarchies — saying that women in Hollywood are more important than other women,” Marai Larasi, executive director of Imkaan, a British network of organizations dedicated to ending violence against black women, said on the E! arrivals special. “We have a platform, and we’re trying to use it in the best way we possibly can.” Larasi attended as Emma Watson’s guest.

But the tone on the red carpet was not entirely serious. Smiles abounded. Along with discussion about women’s rights came lighthearted banter by nominees about butterflies (the stomach variety) and some of the usual fashion chitchat. Alexis Bledel carried a black crystal clutch from Onna Ehrlich; Gucci dressed Margot Robbie and Dakota Johnson.

Oprah Winfrey sent a jolt through the audience when she received the Cecil B. DeMille Award for lifetime achievement.

“A new day is on the horizon!” Winfrey shouted toward the end of her eight-minute speech, which touched on the importance of diversity in Hollywood but focused mostly on the #MeToo movement, noting that it was brought forth by the “insatiable dedication” of journalists and women like the recently deceased Recy Taylor who have spoken up to tell their stories.

“When that new day finally dawns, it will be because of a lot of magnificent women, many of whom are right here in this room tonight, and some pretty phenomenal men,” Winfrey said. She received multiple standing ovations — some people stayed standing as she spoke — and finished her comments with an assertion of hope, looking forward to “the day when nobody ever has to say #MeToo again.”

It was lost on few that Winfrey was accepting an award named for a man who helped cement a culture of male domination in Hollywood.

After Winfrey exited the stage, Natalie Portman arrived to present the award for best director. “Here are the all-male nominees,” Portman said. (Guillermo del Toro won for “The Shape of Water.”)

“Three Billboards Outside Ebbing, Missouri” won four Globes, including best drama, becoming the film to beat in the coming Oscar race. “Three Billboards,” about a mother who goes to extremes to keep local police focused on her daughter’s murder, was also honored for Frances McDormand’s acting, Sam Rockwell’s work in a supporting role and Martin McDonagh’s screenplay.

The foreign journalists who bestow the Globes are known for spreading their awards far and wide, and that was the case Sunday, with “Lady Bird” receiving two trophies (best comedy and best actress in a comedy, for Saoirse Ronan), and “The Shape of Water” honored in two categories (best director, best score). Gary Oldman won best actor in a drama, for playing Winston Churchill in “the Darkest Hour.” “Coco” was named best animated film. And “I, Tonya” was recognized with Allison Janney’s win for best supporting actress.

But several movies received nothing, including Steven Spielberg’s newspaper drama, “The Post,” which was nominated for six prizes. “Call Me by Your Name,” “Get Out,” “Mudbound” and “All the Money in the World” were also ignored.

James Franco won best actor in a comedy for “The Disaster Artist,” a biopic about Tommy Wiseau, an eccentric Hollywood figure best known for his cult film “The Room.” Wiseau, who had been sitting in the ballroom in wraparound blue sunglasses and looking at his phone, sauntered to the stage, where a hoarse Franco was espousing his love for his brother, Dave Franco, who also stars in “The Disaster Artist.” Standing nearby, the younger Franco got a little teary.

The night’s first award went to Nicole Kidman, who won best actress in a television movie or limited series. “Power of women!” she said, holding up her Globe and name checking her female co-stars. Kidman won for her role in the HBO series “Big Little Lies,” in which she plays a battered wife who summons the courage to leave her husband. Her co-stars Alexander Skarsgard and Laura Dern won for best supporting actor and actress and the show won for best limited series or TV movie.

As expected, Hulu’s adaptation of Margaret Atwood’s dystopian novel about the repression of women, “The Handmaid’s Tale,” was honored as best drama, matching its win last year at the Emmy Awards. Elisabeth Moss, who stars in that series, also repeated her Emmys win, collecting the trophy for best actress in a drama. “This Is Us” star Sterling K. Brown was named best dramatic actor, the first time in Globes history that a black man had won that prize.

“You wrote a role for a black man that could only be played by a black man,” Brown said in his speech, thanking the “This Is Us” creator, Dan Fogelman, for creating his part. “I am being seen for who I am, and being appreciated for who I am, and it makes it that much more difficult to dismiss me or dismiss anybody who looks like me.” The Amazon series “The Marvelous Mrs. Maisel,” about a perfectionist 1950s housewife who becomes a stand-up comic, won the Globe for best TV comedy, and its star, Rachel Brosnahan, collected the trophy for best actress in a comedy.

“Their support was completely unwavering,” Amy Sherman-Palladino, the show’s creator, said of Amazon from the stage while wearing a top hat festooned with feathers. (She made no mention of Roy Price, who had helped push forward the series before resigning in October following accusations of sexual harassment.)