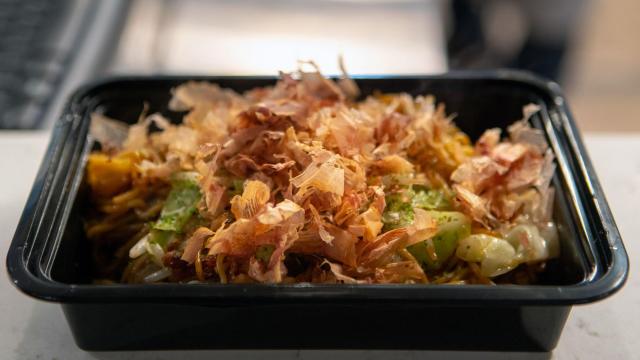 Japan Village can claim the title of food anchor for the collection of enterprises that have settled into the Industry City development in Sunset Park, Brooklyn. It’s a combination marketplace for food products and group of mostly casual dining spots spread over 20,000 square feet. Japan Village’s koi logo is splashed, graffiti-like over the outside of the building facing Third Avenue. Tony Yoshida — who owns the Sunrise Mart Japanese markets and the Michelin-starred Kyo Ya kaiseki restaurant in the East Village, its spinoff Autre Kyo Ya, and other spots, with his son, Takuya, and daughter, Erina — has created this one-stop Japanese culinary destination. You may not need to schlep to Sunset Park for another bowl of ramen, but you just might be drawn first to gawk, then to munch on a bowl of katsu-don or a takoyaki octopus balls before buying freshly made tofu and yuba, sliced lotus root, some imported Japanese Wagyu or a gift-worthy bottle of Japanese whiskey to take home.

The market, which occupies about half the single-story space, includes a seafood counter (most of the fish comes from Japan), a fresh tofu stall and a butcher shop run by Japan Premium Beef from the East Village. The rest is an array of specialized dining counters, most of which are owned and run by Yoshida’s company. There are individual stalls for sushi, bento boxes, street food (like okonomiyaki), donburi rice bowls, Japanese snacks and tempura, udon and soba (made on the premises), ramen, salads, coffee and baked goods. Also in the complex, and yet to open, are Waku Waku, a full-service izakaya restaurant and bar with 200 seats, and a liquor store stocked with Japanese imports.

Yoshida, who opened Sunrise Market in 1995, said the appeal of Industry City was that it cost less to rent there than in Manhattan, and that it was easier to get help. He expects it to draw an international clientele. Next year Yoshida is adding a cultural center on the second floor, where he will sell imported Japanese goods, like housewares and clothing, and host classes and events. “We don’t want to lose the crafts, the small-scale producers, and we can give them an American audience,” Yoshida said.