A New Destination for Chinese Food 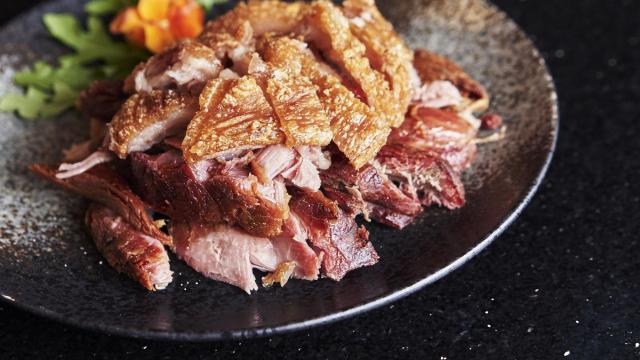 NEW YORK — Xueling Zhang arrives in the kitchen by 7 a.m. to make the day’s soup dumplings. On a good day his restaurant, Memories of Shanghai, goes through 50 orders of xiao long bao, each one swirled into a hypnotic brocade in Zhang’s hands.

Then he turns to other dim sum items under his purview: tender minced chicken and onion dumplings tickled with curry powder; rolls of blistered scallion pancakes with wisps of braised beef peeking through; and sweet sesame-topped hand pies called shaobing, baked from dough stretched thin and painted with oil and lard, and folded into hot pockets that spray bits of crust, like confetti, with every bite.

New York dumpling fanatics may recognize Zhang’s xiao long bao. They are reminiscent of the faintly sweet, lip-smacking versions that turned Joe’s Shanghai and Nan Xiang Xiao Long Bao into soup-dumpling powerhouses. Zhang, 63, has made dumplings at both places, and in several other kitchens, since arriving in the United States in 2002. This September, he and his family opened this restaurant of their own, a diminutive counter with an alleyway entrance wedged between a parking garage and a police station.

But Memories of Shanghai is not in a well-established Chinese-food destination like Flushing, Queens, or Sunset Park, Brooklyn. Rather, the Zhang family is part of a small cadre of pioneers building an entirely new Chinatown in unlikely territory: Forest Hills, Queens.

Past the outlet stores of Austin Street, you can just make out the familiar thwackof la mian dough hitting the counter at Xin Taste Hand Pulled Noodle. Down the block, a cafe called Pink Forest serves creative bubble tea flavors and jianbing — Beijing’s famed savory pancakes — alongside bagels and almond croissants. Snowdays, a Taiwanese shaved ice chain with locations in Manhattan, Brooklyn and Queens, does not have a branch in Flushing or Elmhurst. But it does have a storefront on Austin Street.

Each of these businesses has opened in the last two years, a sea change in a neighborhood better known for its decades-old pizza parlors and Jewish delis.

“Growing up on Yellowstone Boulevard, I always knew the local delicacy was Knish Nosh or a mean bowl of matzo ball soup,” said Nora Lum, the rapper and “Crazy Rich Asians” actor who goes by the name Awkwafina. When her family wanted a taste of Chinese food, they had to trek to Flushing and Elmhurst.

Her great-grandfather Jimmy Lum was the owner of Lum’s, a Cantonese restaurant that was a Flushing fixture from the 1950s until it closed in the ‘80s. Her father, Wally Lum, grew up in Whitestone but settled in Forest Hills in 1987, as did many Chinese-Americans soon afterward.

The 1990 census recorded just over 1,500 Forest Hills residents who identified as Chinese. By 2000, that number had grown to more than 7,000, and by 2016 to more than 11,000, with one-quarter of residents reporting Asian ancestry, according to the most recent estimates. “It’s a good starter neighborhood for families,” Nora Lum said. “Plus it has a great school district.”

So the emergence of Chinese restaurants for Chinese palates is not surprising, especially as Flushing rents and property values soar to rival Manhattan’s. Although Forest Hills is historically one of the borough’s wealthiest neighborhoods, costs are moderate compared with prime locations in downtown Flushing.

Now, in a space of his own, he said through an interpreter, he is able to prepare the intricate, creative dishes he has always wanted to do, while introducing non-Chinese diners to a world of flavor beyond beef with broccoli.

Lei takes a scattershot approach to menu management at Spy C. The walls are papered with a diner’s worth of rotating specials like braised and fried trotters, and steamed luffa. Then there are dishes that can be ordered by request — ideally in Mandarin, as few members of the staff are fluent in English. One standout is a steamed grass carp head that the diner excavates from a blanket of pickled chiles.

Newcomers can make do with the printed menu’s Hunan-style fish fillets and soft tofu, which have none of the muddiness you find at many Sichuan and Hunan restaurants in New York, and leave a slow, tangy burn that rewards spoonful after spoonful.

Thomas Lo, an anesthesiologist and Forest Hills resident who studied at the International Culinary Center in Manhattan and interned at high-end restaurants, said he fell in love with Spy C after tasting Lei’s cucumber salad. “It seems like such a simple dish, but it’s actually not so easy to do well,” Lo said. “When I took one bite my eyes lit up. It was so crisp, refreshing and perfectly balanced.” To make it, Lei steeps Sichuan peppercorns in heated oil to draw out their camphor and numbing citrus buzz. Then he combines that oil with Chinkiang vinegar, soy sauce, cilantro, minced garlic, sesame seeds, touches of salt and sugar, and bits of dried red chile, and uses it to glaze seeded cucumbers that have been slivered into immaculate curls to deliver a satisfying crunch.

At the Bund, a Shanghai-meets-Sichuan restaurant that opened on Queens Boulevard in late 2016, chef Yan Jun is also experimenting with forward-thinking, cross-province cuisine.

Like Zhang and Lei, Yan has consulted extensively for Chinese restaurants. The Bund gives him a stage of his own to lend his spin to popular new dishes from the Chinese mainland.

Pork hocks are typically braised in Shanghainese kitchens, but Yan marinates a hulking one in vinegar and black pepper, steams it until the bones wiggle, then deep-fries it to a shattering crisp. He also makes superlative versions of classics like softball-size lion’s head meatballs, tender as spoonbread, and lacquered Peking duck that holds its own against the much-praised versions at Hakkasan New York and Wu’s Wonton King in Manhattan.

Yan, 40, pushes these boundaries at the direction of David Kong, 46, the Bund’s manager and co-owner.Kong’s aunt Fu Yafen owns the Michelin-starred restaurant Fu He Hui in Shanghai, and his father, Tsun Kong, trained in Shanghai before moving to the United States and opening restaurants in New York and New Jersey.

David Kong is a jeweler by training, but after living in Forest Hills for nearly 30 years, he was frustrated by the lack of quality Chinese cooking nearby.

“Chinese food in New York is getting better every year,” he said, “and migration has done great things for Sichuan food. But Shanghainese food is more difficult. The preparation is more involved, with marinades and sauces specific to each dish.” When a space opened up near his condominium, he and his childhood friend Jim Nguyen took a leap of faith.

At Memories of Shanghai, the Zhang family is also taking a leap. Zhang’s son-in-law, Aaron Zhao, works beside him in the kitchen. His wife, Xiumei Zhang, runs the tiny dining room, and his daughter, Elsa, assists with operations.

“My father has been making dim sum for a long time,” she said, “and he’s set up a lot of restaurants for success. But this is a chance for our family to do something for ourselves.”

Elsa Zhang was drawn to Memories of Shanghai’s space in part because the previous tenant, a teriyaki restaurant, had a long residence there. The gentle rent — and proximity to Public School 101Q, where her three children go to school — did not hurt.

“If I work for other people, my role is narrow,” she said. “But if I open this restaurant with my family, we face a wide road ahead.”