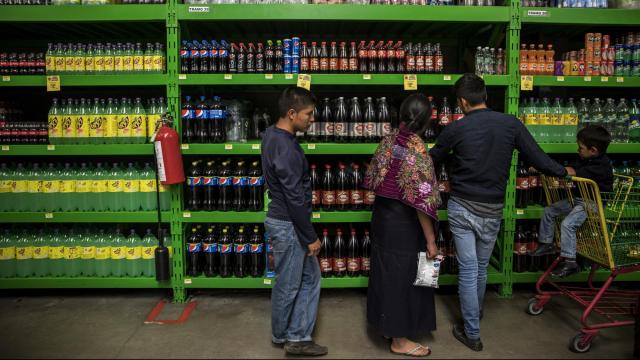 By ANDREW JACOBS and MATT RICHTEL

Though members of the Ruiz family sometimes eat here, they more often grab dinner at Domino’s or McDonald’s. For midday snacks, they buy Doritos or Cheetos at Oxxo, a convenience store chain so ubiquitous here that nutritionists and health care advocates mockingly refer to the city as San Cristóbal de las Oxxos.

The family’s experience in food service began in the 1960s, when Ruiz’s grandmother sold tamales and home-cooked food made with produce from a nearby farm; those same ingredients sustained her boys with vegetable stews, beans, tortillas and eggs. Meat was a luxury.

Since then, the Ruizes have become both consumers and participants in an extraordinary transformation of the country’s food system, one that has saddled them and millions of other Mexicans with diet-related illnesses.

It is a seismic shift that some nutritionists say has an underappreciated cause: free trade.

Mexico began lifting tariffs and allowing more foreign investment in the 1980s, a transition to free trade given an exclamation point in 1994, when Mexico, the United States and Canada enacted the North American Free Trade Agreement. Opponents in Mexico warned the country would lose its cultural and economic independence.

But few critics predicted it would transform the Mexican diet and food ecosystem to increasingly mirror those of the United States. In 1980, 7 percent of Mexicans were obese, a figure that tripled to 20.3 percent by 2016, according to the Institute for Health Metrics and Evaluation at the University of Washington. Diabetes is now Mexico’s top killer, claiming 80,000 lives a year, the World Health Organization has reported.

For many Mexicans, NAFTA promised to make real “the fever dreams of joining the modern economy,” said Timothy A. Wise, a trade expert at the Small Planet Institute and Tufts University. “All former rural workers would be in new jobs in the burgeoning manufacturing industries of the post-NAFTA world. That just hasn’t happened.”

“The only way that Mexico became a ‘first world’ country was in terms of diet.”

The phenomenon is not limited to Mexico. Research shows free trade is among the key factors that have accelerated the spread of low-nutrient, highly processed foods from the West, “driving the obesity epidemic in China, India, and other developing countries worldwide,” according to the T.H. Chan School of Public Health at Harvard.

But Jaime Zabludovsky Kuper, Mexico’s deputy chief negotiator on the pact, said NAFTA didn’t cause obesity. Instead, he said, it lowered food prices and reduced malnutrition. In 2012, 1.6 percent of Mexican children suffered from severe malnutrition, a sharp drop from 6.2 percent in 1988, according to government data.

Zabludovsky said that Mexicans had long been enticed by American food, and that high tariffs used to make it expensive, not unavailable. The economy is now more stable, he said, and Mexicans are living longer — which is partly why more people are dying from noncommunicable diseases like diabetes and heart disease. “It’s a symptom of relative prosperity,” he said.

The broader pros and cons of NAFTA have come under increasing scrutiny given President Donald Trump’s threats to dismantle it. Among its chief champions are U.S. farm and food-retailing interests whose fortunes have benefited tremendously from the open market. Mexican exports to the United States have surged, and a more stable economic structure has evolved in Mexico. The country’s unemployment rate has stayed mostly constant, but average wages have fallen to $15,311 in 2016 from $16,008 in 1994, according to the Organization for Economic Cooperation and Development.

The surge in agricultural investment from the north modernized Mexican farming practices but it also displaced nearly 5 million people who worked on family farms. Many migrated to cities, adding to the ranks of those who rely on Western, processed food.

Duncan Wood, director of the center’s Mexico Institute, said falling food prices, coupled with a stagnant economy, have left many Mexicans in a curious economic position. “People are able to indulge in more processed food, consuming more calories,” Wood said, “but not rich enough to have an affluent lifestyle where they are able to be healthier.”

So went the Ruiz family. As a boy, William Ruiz adored home-cooked meals like traditional thick stews with squash, carrots, potatoes and green beans. The family rarely ate out.

But when he was 11, the family moved to Villahermosa, the bustling, heat-scorched capital of Tabasco where U.S. fast-food joints had become plentiful. The Ruizes became avid patrons of Domino’s and Burger King. McDonald’s was their favorite.

William savors the memory of his first Happy Meal — the crispy fries, chicken nuggets and toys nestled in the box. “It was like having something first-world on your uncivilized ranch,” he said, “It was beautiful.”

In 2012, after the bar they owned in Tabasco went out of business, the family moved to San Cristóbal and opened Dogo Express.

The sons began to put on considerable weight in their late teens, but their father, Gabriel Ruiz Barbosa, was not worried. In fact, it was a point of pride. “We were in a good financial position so we could offer them foods heavy in protein and also fast food,” he said. “We’d say to one another, ‘If they’re a little fat, it means they’re well fed.'”

They are in good company. A study published in 2015 found that Mexicans bought, on average, 1,928 calories of packaged food and beverages a day, 380 more calories than in the United States and more than people in any other country tracked by Euromonitor International, a market research firm.

While the causes of obesity are complex — involving genetics, lifestyle changes and other factors — multiple studies have linked weight gain to consumption of processed foods high in salt, sugar and fat that are staples of retail giants.

In 2012, Corinna Hawkes, director for the Centre for Food Policy at City University London and an expert on trade policy and nutrition, co-authored a paper on the impact of free trade on Mexico’s diet. The study, “Exporting Obesity,” found that the increased investment by U.S. companies had made soft drinks and processed food more accessible to the average Mexican.

She concluded that, at a minimum, NAFTA had sped up Mexico’s dietary transition and the rise of obesity.

“I know this stuff is bad for me, but I can’t stop,” Gabriel Ruiz Barbosa said, glancing at a tray of McDonald’s sundaes his son was carrying into the restaurant. “My cardiologist says I should look after myself, but I’m very stubborn.”

The family has mixed feelings about open trade. Their tenuous prosperity is built on selling food from the United States, and their diet is both sustenance and curse.

“Look at us,” the elder Ruiz said, as he sheepishly polished off the remains of a chocolate sundae. “We’re all educated people but we’re hooked.”