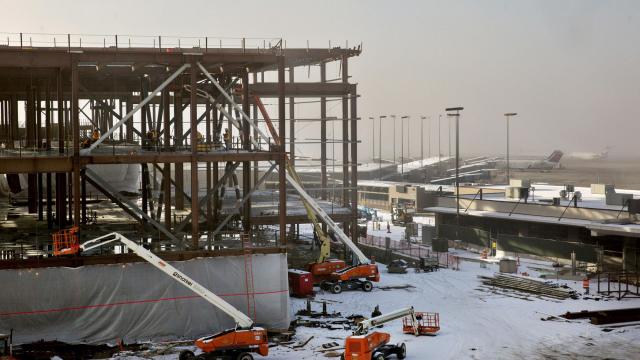 SALT LAKE CITY — More than three years after construction was started to rebuild Salt Lake City International Airport and scrape away a collection of obsolete terminals, the contours of one of the nation’s largest air travel infrastructure projects are taking shape.

The project is part of the $10 billion a year that airports invest to modernize infrastructure in the United States, according to the Airports Council International-North America, a trade group in Washington.

And the extensive renovation could help reduce public embarrassment about the condition of aging airports in the United States that cannot keep up with demand. In 2014, former Vice President Joe Biden compared New York’s LaGuardia Airport to “some third-world country.”

The $3.6 billion airport reconstruction project here is so big that it looks like a city emerging from the high plains along Utah’s Wasatch Mountains.

Concrete pillars for the new 908,000-square-foot, $365 million main terminal and for a $158.4 million, 1.7 million-square-foot parking deck are in place. The steel outlines of the first half of the $671.6 million, 827,000-square-foot South Concourse are also set. Nearly 1,000 construction workers and a battalion's worth of vehicles and equipment are deployed on the 300-acre construction site.

A second concourse of 477,000 square feet will be constructed at a cost of $545.5 million to the north between the runways. One existing 990-foot tunnel, and a second, new one of the same length, will link the two concourses at a cost of nearly $140 million.

The airport is spending more than $90 million to construct 14 miles of new roadway. A station for the light-rail line connecting the airport to downtown Salt Lake City will be moved closer to the new terminal.

When the facilities are finished in 2023, they will provide this fast-growing metropolitan area, home to 80 percent of Utah’s 3 million residents, with improved efficiency at one of the country’s busiest airports, a hub for nine airlines with 329 daily flights. Traffic has climbed to more than 23 million travelers annually in an airport designed to serve fewer than half that number.

To ease congestion, Delta Air Lines, which serves 70 percent of the airport’s passengers, agreed to help finance the reconstruction.

“Planning for this project goes back to the early 2000s master plan, when we were thinking about how to make the existing airport layout work,” said Bill Wyatt, the airport’s executive director. “Delta sat down and also tried to think how they could make that work operationally. They concluded they couldn’t make it work operationally. Everybody began to focus on this new concept, which we’re building.”

Delta, which took in $39.6 billion in total revenue in 2016, uses the hub principally as a link between coastal and mountain cities. Delta’s investment in the airport is a share of the $1.2 billion the airline is spending annually during the next decade to expand and modernize air transport facilities around the country, according to company figures. The money would be spent on airport projects in Atlanta, Los Angeles, New York, Salt Lake City and Seattle, Morgan Durrant, a company spokesman, said in an email message. Mike Williams, the program director for the airport’s Terminal Redevelopment Program, said the nationwide airport reconstruction effort started in 2008, as the country was in the grip of the Great Recession. Three years after a downturn in the U.S. airline industry pitched Delta into bankruptcy in 2005, Hartsfield-Jackson Atlanta International Airport started to build its $1.4 billion, 1.2 million-square-foot Maynard H. Jackson Jr. International Terminal.

In the same period, Los Angeles International Airport began a $14 billion project to upgrade runways and safety facilities, improve escalators and elevators and renovate four terminals. The project included a $2.1 billion remodeling and expansion of the international terminal and the addition of a $1.6 billion, 750,000-square-foot midfield terminal.

Expansion is needed. In 2016, 823 million passengers boarded airliners in the United States, 25 million more than in the previous year. Airport and airline executives, mindful of criticism about old facilities and responsive to the growing demand, have escalated construction projects into a nationwide building boom, with New York-area airports leading the way.

LaGuardia is spending $8 billion to replace four terminals with one, build a new parking structure, connect the airport more efficiently to public transit and gain more space for taxiways. Newark Liberty International Airport just broke ground on a $2.4 billion project, much of the money to be spent replacing 44-year-old Terminal A with a 1-million-square-foot facility and a 3,000-space parking deck. And Gov. Andrew M. Cuomo of New York announced a $10 billion project this year to renovate and expand passenger terminals and improve ground transportation at Kennedy International Airport.

Rebuilding the Salt Lake City airport has attracted broad support from residents, not only because it is financed almost entirely without taxpayer funds but also because the new terminals will enhance one of the most conveniently situated major airports in the country. From almost anywhere in the city or its outskirts, the airport is less than a half-hour car or train ride away. Two features of design and construction distinguish the reconstruction: its linear layout, and the lack of disruption to the airport’s operation.

When the project is finished, the airport will consist of an airy central terminal flanked by the two wings of its 3,700-foot-long South Concourse. In front of that will be the 3,400-foot-long North Concourse.

The unbent concourses, designed by the architecture and engineering firm HOK, are characteristic of airport reconstruction projects to accommodate big planes. The three old terminals, dating to the 1960s, are connected by an outdoor sidewalk and were upgraded sporadically through the decades with clusters of gates served by fans of tightly spaced jet bridges.

The project can occur without disruption because the 7,800-acre airport has enough room to build all the new facilities, including the first wing of the South Concourse. When gates in the new concourses are ready to serve passengers, the airport will close and demolish the old terminals, then build the rest of the South Concourse.

“It’s a very flexible and efficient design,” Wyatt said. “If we need more space after the initial phase of construction, you can add capacity as far as the eye can see, virtually without any disruption at all.”